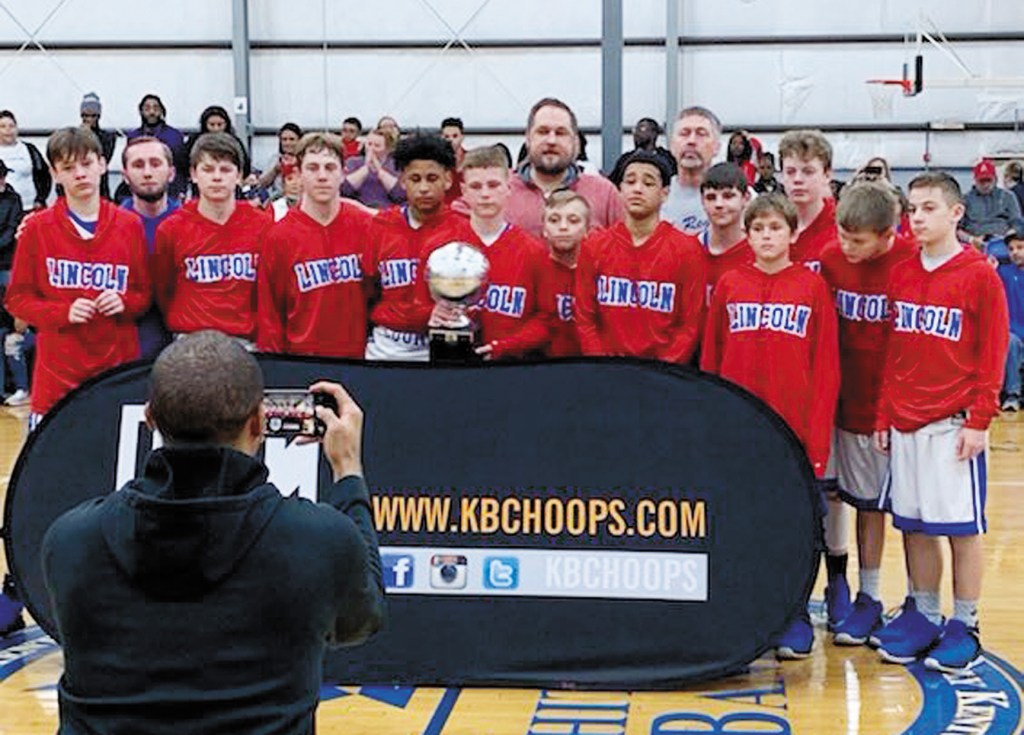 The Lincoln County Middle School Eagles fell one game short of a perfect season, falling to Owensboro Middle School in the championship game of the Kentucky Basketball Commission (KBC) State Tournament in Lexington.

Owensboro Middle pulled ahead of Lincoln 23-18 in the opening frame and would outscore the Eagles in three of the four quarters played to claim the championship trophy.

The Eagles held the point advantage in the final frame, however, the 12-10 edge would not be enough to overcome Owensboro’s lead.

Results of the games, semifinal victory back to opening win, follow:

Lincoln County punched its ticket to the championship game by knocking out defending champion Jefferson County Traditional Middle 60-57 in the semifinal round of the KBC State Tournament Sunday afternoon.

Tramane Alcorn and Layne Lark combined for 45 points and 16 rebounds in the win, with Alcorn leading the way with 27 points. He also had seven rebounds and four assists. Lark led on the glass with nine rebounds.

Lincoln, which led 17-15 after the first quarter, found itself on the wrong side of the scoreboard at the half, with Jefferson using a 19-11 second-quarter run to post a 34-28 lead at the break.

Jefferson held to the lead as the third quarter ended, but Lincoln’s 12-5 scoring advantage in the period pulled the Eagles within one, 41-40. The Eagles would close out the game with the game’s high-point effort, outscoring Jefferson 20-16 to seal the win.

The Lincoln County Eagles continued their march through the KBC State Tournament with a 58-48 victory over Hazard Middle School in the Elite 8 round.

Hazard held the advantage at the end of the first two quarterstops, jumping on Lincoln 12-7 in the first. The Eagles turned the tables on Hazard in the second quarter, though, outscoring their opponent 11-7 to pull within 24-23 at the half.

Lincoln would own the scoring advantage in the third and fourth quarters, outpointing the Eagles 35-24 to earn the double-digit win. Lincoln outscored Hazard 14-10 in the third to make it 37-34 going into the fourth period then closed on a 21-14 run.

Lincoln County had to hold off Knox County Middle School to advance in the KBC State Tournament, handing Knox a 52-47 defeat Sunday morning in the Sweet 16 round.

The Eagles pulled ahead 16-12 in the first quarter then used a 13-11 second-quarter scoring edge to push that lead to 29-23 at the break.

Knox made a small dent in the Eagle lead in the third quarter, outscoring Lincoln 12-10 to make it a 39-35 ballgame. Lincoln would move on to edge Knox 13-12 in the fourth quarter to claim the win.

Leading the Eagles to victory were Layne Lark and Tramane Alcorn with 17 points apiece. Lark also had eight rebounds and Alcorn had six rebounds and three assists.

Lincoln County relied on an 18-4 third-quarter scoring surge to carry the Eagles to a 43-33 win over Mason County in the Round of 32 of the KBC state tourney Saturday.

Mason led 10-6 after the first quarter and held to a 17-14 lead at the half before Lincoln’s offense started clicking in the third. The 18-4 spurt pushed the Eagles ahead 32-21 at the end of three quarters before they moved on for the win.

Tramane Alcorn scored a team-high 15 points in the win and Colton Ralston and Layne Lark knocked down 10 points apiece. Ralston also had three steals and Lark had six rebounds.

Four Eagles hit double figures to lead Lincoln in a 56-38 win over Southern Pulaski Middle School in the KBC State Tournament Round of 64.

Lincoln led from the opening frame, jumping on Southern 19-8 in the first quarter. Southern outscored Lincoln 11-5 in the second quarter but the Eagles still took a 24-19 lead into the break.

The Eagles outscored Southern the rest of the way, turning a 19-9 third-quarter run into a 43-28 advantage then finishing up 13-10.

Lincoln County earned itself the No. 6 seed in the KBC State Tournament 84-team field with a lopsided 54-24 win over Woodford County Middle School in pool play Friday night.

Lincoln knocked Woodford back on it feet in the first quarter, jumping out to a 12-2 start and the Eagles never looked back.

Woodford would outscore Lincoln 17-16 in the second quarter for a 28-19 margin at the break, but the Eagles outgunned Woodford in the second half, going on a 26-5 scoring tear. Lincoln outscored Woodford 14-3 in the third quarter and 12-2 in the fourth.

Tramane Alcorn paced Lincoln in the win with 15 points along with four steals and Colton Ralston followed with 13 points and eight assists. Layne Lark contributed eight points, Zack Moore had six points and six rebounds, Jansen McAninch and Trevor Miracle each had six points and Jalen Smith had three assists.