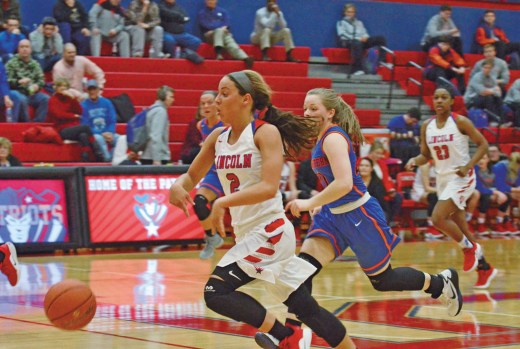 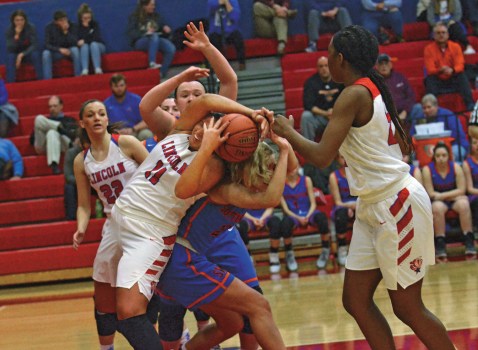 Photo by Nancy Leedy LINCOLN COUNTY’S Kaitlynn Wilks gets tangled up with Southwestern’s Regi Cundiff, right, and Marissa Loveless on this second-half rebound. Wilks got the rebound. Wilks led a quartet of double-digit Lincoln players with a game-high 16 poins. 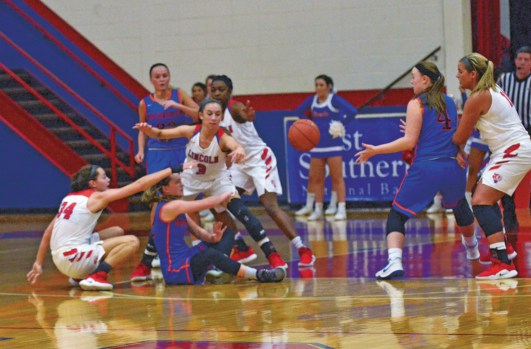 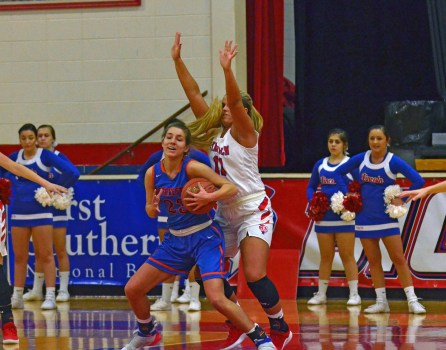 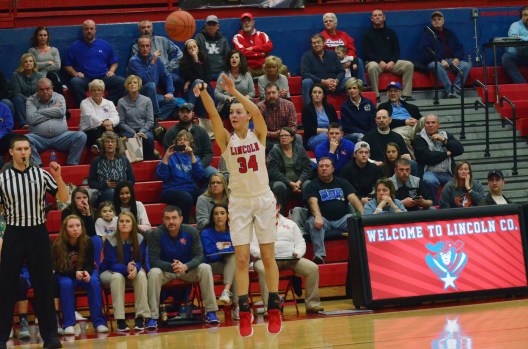 STANFORD — After a disappointing loss to Casey County in the Dickie Gilbert Classic at Garrard Saturday, Lincoln had an easy time with Southwestern in a clash of two Top 25 teams.

Lincoln, which dropped from No. 4 to No. 11 after the loss, dispatched the No. 22 Lady Warriors 54-36 Tuesday in the first game of a doubleheader at LCHS’ J.C. Eddleman Gymnasium.

“Saturday was not us. It was ugly. It’s an ‘L.’ But it’s a game we learn from,” Lincoln County coach Cassandra McWhorter said. “It’s good to see your girls come back and respond against a very quality team like Southwestern and bounce back, and in the way they did tonight. I’m very proud of them.”

The Lady Patriots (18-3) exploded on the Lady Warriors early, using a 19-4 scoring run to take control of the game. Lincoln, which shot 35 percent from the field overall (21-for-60), was blistering hot in the opening frame, going 9-for-14 for for 64 percent.

“We didn’t play well against them last year down there at their place. They kicked us pretty hard at their place,” said McWhorter. “We’re coming off the loss Saturday to Casey and our girls were motivated to get back and get back to what we were doing well, which starts on the defensive end of the floor. They came out with defensive intensity tonight like I know they are capable of and it showed, which leads to the offensive production that we got.”

Emma King, one of four Lady Patriots hitting double figures in the win, scoring 10 points, kicked off the opening run with back-to-back buckets, a 3-pointer and a shot inside. She also added another bucket in the run. Kaitlynn Wilks, who had a game-high 16 points, scored four points, including a 3-point goal. Maddy Boyle, who finished with 10 points, also had four points in the scoring surge.

The fourth Lady Patriot putting up double figures against Southwestern was Anna Lane. The senior guard came off the bench to score 11 points. She scored four in the first period, including the quarter-ending bucket that gave Lincoln a 21-7 lead.

“Anna came ready tonight,” said McWhorter. “I’ve always said we’ve got more than one or two scorers. On any given night, anybody can score double digits and Anna proved that tonight. She came in confident. It was great to see teammates trusting teammates. I think we had like 13 assists. We moved the ball well and Anna – they’re helping off of her. She stepped up and did what she needed to do tonight and put the ball in the hole.”
Lane opened Lincoln’s scoring in the second quarter, stepping behind the arc for a 3-pointer.
The margin remained at 14 at the half, with both teams tallying 11 second-quarter points to make it 32-18. Lincoln led by as many as 16 points in the period, with Boyle going coast-to-coast off a steal with 3:31 left in the half for a 32-16 advantage.

Lincoln’s shooting percentage took a dive in the third quarter as the Lady Patriots went 0-for-7 to start the second half. The scoring drought allowed the Lady Warriors (16-4) to cut the Lady Pat lead to single digits.

Alexa Smiley scored a layup to kickstart the 7-0 Southwestern run. After a free throw toss by Regi Cundiff, Kallie Sheron, who led Southwestern with 13 points, hit inside, then Kennedy Harris scored to get the Lady Warriors within 32-25.

But Southwestern’s scoring spurt proved to be a temporary setback for Lincoln. The Lady Patriots closed the third quarter on an 8-3 run to push their lead back to double digits. Zaria Napier opened the run with a free throw. Boyle followed with a drive to the basket then Wilks added the final five points. She hit inside then converted on a three-point play for a 40-28 advantage heading into the fourth quarter.

Lincoln’s lead never fell below 14 points in the final period. The Lady Patriots led by as many as 19 points before the final horn sounded.

“We talk about the first three to four minutes (third quarter) being really important,” said McWhorter. “We came out and we got good looks. The ball just wasn’t going in the hole. I think we went 0 for maybe six or seven trips that we didn’t score. I just told them in the locker room that I’m proud of them because sometimes when that ball is not going in the hole we tend to let up our defensive intensity. But tonight I saw them lock in and say, ‘We’ve got to get stops because we’re not scoring.’ And them sustaining that really helped us get back in a rhythm. We know we’ll pick the offensive back up it’s just a matter of shots not falling. We didn’t drop our heads like poor old pitiful me, we kept playing defense and opened the game back up.”

Southwestern shot an icy 25 percent from the field, going 13-for-51 overall. The Lady Warriors were 8-for-15 at the foul line.