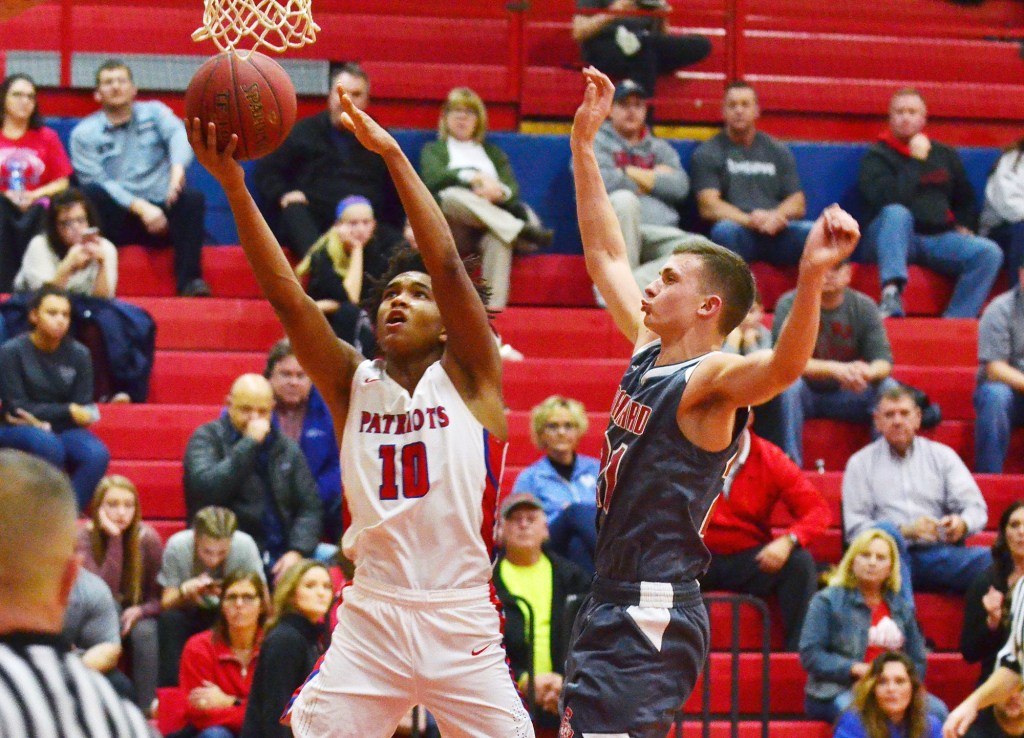 Photo by Nancy Leedy JAXON SMITH of Lincoln scores on Braden Sebastian of Garrard County Tuesday night. Smith had a game-high 23 points in the win.

STANFORD — Superior guard play can go a long way for a basketball team, and that’s exactly what the Lincoln County boys had Tuesday night.

The two players were a combined 12-for-28 from the floor but used their quickness to find open shots throughout the game. Jaxon had a game-high 23 points on 6-for-11 shooting. He went 10-for-13 from the foul line, including an 8-for-9 stint in the fourth quarter that helped Lincoln ice the win. Blake was 6-for-17 overall, 3-for-7 from 3-point range. He was 6-for-6 at the line.

“We earned it. It was a heck of a game,” Lincoln coach Jeff Jackson said. “I thought both teams played really hard. Our district is really good so it’s always a battle when you play in the district. I thought we played hard, harder than we have been. I’m really proud of our kids and the effort that they gave tonight.”

Garrard (6-9, 1-2) led early in the game, with Charles Jones, who led the Lions with a double-double of 22 points and 11 rebounds, scoring inside off a turnover. After an Elijah Frye 3-pointer to give Lincoln it’s first lead, 3-2, Ethan Wall answered with a Garrard trey to nudge the Lions back on top 5-3.

Jones, who was 9-for-15 from the field, helped Garrard maintain the lead for most of the first with a bucket off a steal (7-5) followed by a slam dunk (9-7). However, Lincoln would answer each shot to tie the game with Riley Bodner hitting for a 5-all tie, Jaxon Smith going inside for a 7-7 tie and Blake Smith sinking two free throws for a 9-9 deadlock.

Braden Sebastian, who finished with 16 points on 6-for-9 shooting, sank two free throws for Garrard to break the tie when Bryston Alcorn rang up a 3-pointer to put Lincoln up 12-11. Jones scored a putback late to give the advantage back to Garrard only to have Jaxon Smith hit his buzzer-beater to put Lincoln up for good.

The Patriots extended their lead to 19-13 early in the second quarter off baskets by Frye and Jaxon Smith when Jones set off on his own scoring run. The senior forward scored back-to-back putbacks then sank two free throws to force another tie, 19-19.

The tie lasted just 19 seconds. Blake Smith broke the final tie with a three-point play with 2:33 left in the first half to set off a 9-0 run. Blake had eight of the nine points to make it 28-19.

But the Lions would not go away.

Garrard would be back within 28-23 at the half, with Hudson Cornett draining a 3-pointer and Sebastian sinking a free throw toss before the horn.

The Lions got within four points twice in the third quarter. A Brice Burkhart 3-pointer with 2:15 left made it 41-37 and a Sebastian trey at the 42.4-second mark made it 45-41. But Frye, who finished with 11 points, sank two free throws with just one second left on the clock to push the Patriot lead to 47-41 heading into the fourth.

“They’re good,” Jackson said of the Lions. “They’ve got a really good team, well-coached. They’ve got really good players in Braden Sebastian and Charles Jones. They are really good and they’ve got other good kids that can shoot it.”

Garrard whittled Lincoln’s lead down to 48-46 early in the fourth after a Sebastian 3 and a Jones bucket, but Lincoln would allow the Lions no closer. Blake Smith nailed a 3-pointer and Jaxon Smith followed with a three-point play to push the margin to 54-46 midway through the fourth. Lincoln then outscored Garrard 11-5 in the final 2:07, with Jaxon Smith going 6-for-6 at the foul line in the final minute to seal the win.

“I’m just real proud of the kids and the effort they gave tonight,” said Jackson. “Everybody that played contributed. A lot of people did a lot of good things. “