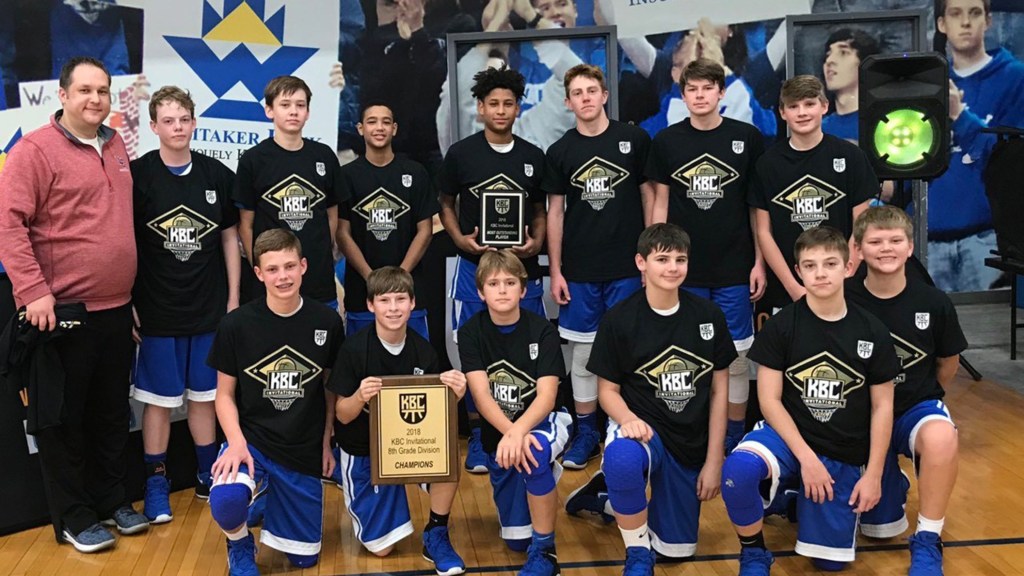 Tourney MVP Tramane Alcorn, who swished the nets for 118 points, pulled down 24 rebounds and had five assists, three blocks and three steals in the 5-0 run, was one of three Eagles hitting double figures in the 15-point win over Crosby in the title tilt.

Alcorn led the way with 21 points. He also had five assists. Layne Lark contributed 15 points in the win and Colton Ralston added 11 points, with five rebounds and four assists. Zack Moore, who finished with eight points, led the Eagles on the glass with nine boards.

The championship win over Crosby Middle was the second victory for Lincoln over the Louisville school. The Eagles began their road to the championship title with a 46-43 win in Pool Play Game 1. What followed were a Pool Play win over Beaumont Middle of Lexington and first-round and semi-final wins over Newburg Middle of Louisville and West Jessamine Middle capped off by the finals win.

Tramane Alcorn burned the nets for a game-high 33 points to lead Lincoln in a 75-61 win over West Jessamine Middle School in the semi-final round of the KBC 8th Grade Invitational Tournament.

Lincoln had two players hit double figures in the win, with Layne Lark finishing with 15 points. He also had six rebounds. Alcorn had five rebounds and three steals in the win.

The Eagles jumped ahead 23-17 in the first quarter but were clinging to a 33-32 halftime lead as West outscored them 15-10 in the second period.

Lincoln turned up its defensive game in the third quarter, holding West to just seven points while scoring 21 to open up a 54-39 lead. West would come out and outpoint Lincoln in the fourth, but the one point edge was too little, too late.

Others contributing in the win were Colton Ralston with eight points, five rebounds and eight assists, Zack Moore and Jalen Smith each with five points, Trevor Miracle with four points, Jackson Sims and Brian Gray with two points apiece and Jansen McAninch with one point and five rebounds.

Tramane Alcorn, Layne Lark and Zack Moore combined for 59 points and 22 rebounds as the Eagles opened championship bracket play in the KBC Invitational Tournament with a 66-60 win over Newburg Middle of Louisville.

Alcorn poured in 26 points and had three blocks, Lark lit up the boards for 22 points and grabbed 15 rebounds and Moore scored 11 points and got seven boards.

Lincoln had to rally to earn the win, however. The two teams were deadlocked at 18-all then Newburg went on a 19-10 scoring tear in the second quarter to move ahead 37-28 at the half.

The Eagles came out in the third quarter and broke on a 20-13 run to get within 50-48 heading into the final frame, and continued their rally effort with a 18-10 run in the fourth to clinch the win.

Trevor Miracle scored four points in the win, Colton Ralston got two points, with 10 assists and four steals and Jansen McAninch had one point.

Lincoln staved off a strong second-half rally by Beaumont Middle of Lexington to win 54-51 in Pool Play Game 2 of the KBC Invitational Tournament.

The Eagles exploded out to a 15-4 lead in the first quarter then used a 19-9 second-quarter run to extend their lead to 34-13 at the break.

Lincoln would need every point of that early lead to claim the win as Beaumont challenged in the second half. Beaumont outpointed Lincoln 17-8 in the third quarter to make it a 42-30 ballgame heading into the fourth quarter. Beaumont then surged 21-12 in the fourth to whittle away at the lead only to come up short.

Tramane Alcorn and Layne Lark both hit double figures to lead Lincoln. Alcorn had a double-double in the game with 23 points and 12 rebounds and Lark finished with 10 points.

Lincoln also relied on an early lead to carry the team to victory in Pool Play Game 1 of the KBC tourney, as the Eagles held off Crosby Middle 46-43.

Lincoln’s offense sputtered in the third quarter, though, allowing Crosby to close the gap. Crosby held Lincoln to just three points while putting up 13 to get within 35-30. Crosby also outscored the Eagles in the fourth, but the 13-11 edge would not be enough to overtake Lincoln.

Three Eagles were in double figures in the win, with Tramane Alcorn getting 15 points with seven rebounds, Zack Moore scoring 14 points with five rebounds and Layne Lark finishing with 10 points. Colton Ralston rounded out the scoring with seven points. He also had eight assists.