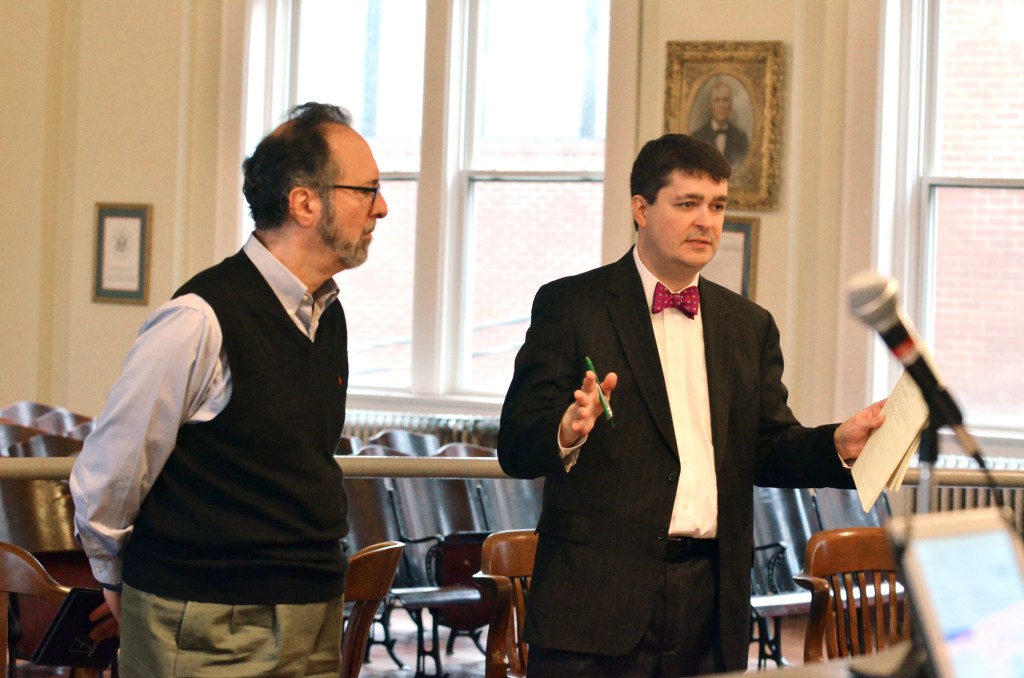 Photo by Nancy Leedy INDUSTRIAL REVENUE BONDS. Mark Franklin, right, an attorney with Stoll, Keenon, Ogden, PLLC, of Louisville, goes over the specifics of what industrial revenue bonds are while addressing the Lincoln County Fiscal Court Tuesday on behalf of Kentucky Fresh Harvest. Curt Meltzer, a partner and Chief Operating Officer of Kentucky Fresh Harvest, left, awaits his turn to speak on the high-technology greenhouse project.

The Lincoln County Fiscal Court, which had previously approved inducement resolutions committing to the project, had the first reading Tuesday of the actual ordinance to issue the bonds to finance an industrial building project being undertaken by Kentucky Fresh Harvest, LLC.

The Kentucky Fresh Harvest project is for greenhouses on the north side of Stanford off Foster Lane and Old Fort Road. The 30-acre facility will grow niche vegetable items, such as cherry tomatoes, all year round.

The bonds are being issued for the purpose of property tax abatement.

Mark Franklin, an attorney from Stoll, Keenon, Ogden, PLLC, of Louisville, who is representing Kentucky Fresh Harvest, addressed the fiscal court before the first reading was approved.

“In April of 2016, the fiscal court adopted a resolution preliminarily approving a bond issue for Kentucky Fresh Harvest. The purpose of the bond issue is to give a property tax abatement for the new facility they are constructing here in Lincoln County. The terms of the ordinance are consistent with the inducement resolution from two years ago,” he said. “The maximum amount of the bond will be $12-million and the term of the bond issue will be 30 years. That means the property tax abatement would last up to 30 years.”

Judge-Executive Jim W. Adams Jr. explained to the court that the county cannot be taxed for property it owns and Franklin elaborated on the subject.

During the term of the bond issue, Lincoln County would simply be serving as a financial conduit for Kentucky Fresh Harvest, meaning the county is freed from any monetary obligations, a concern Adams raised before the ordinance was read.

“I always say in these financings that the county is in no way obligated to make any payments of any principal, interest or otherwise in respect to the bonds,” said Franklin. “Chapter 103 of the Kentucky Statutes, and the bond documents themselves, state that the bonds are not obligations of the county or the commonwealth. They are solely payable with monies provided by Kentucky Fresh Harvest. Even better news in this instance is that the bonds are going to be held by an affiliated entity of Kentucky Fresh Harvest.”

“In essence, Kentucky Fresh Harvest is both the borrower and the lender, so that eliminates a lot of the risk. These bonds are not being sold to the public where you actually have a bank or actual bond holders who pay money to get the bonds. These are held by an affiliate so it’s sort of in-house borrowing because the actual purpose of the bond issue is property tax abatement.”

“It’s not counted as a general obligation so it doesn’t impact your bonding ability. It doesn’t affect what’s called bank-qualified status …. It has no impact on the county’s  ability to borrow whatsoever,” he said.

The bond issue would bring a property tax abatement for Kentucky Fresh Harvest, however, the company would still have tax responsibilities.

“While you are getting out of some property taxes, you are not taking away all of the responsibilities in that you will at least be paying the school portion. Is that correct?” County Attorney Daryl Day questioned.

Franklin affirmed that school taxes are not included in the abatement.

Day added that Kentucky Fresh Harvest would be responsible for occupational and payroll taxes, as well, with only the property taxes affected.

With the terms in place for the ordinance of the bond issue, Magistrate Joe Stanley posed a different question.

“I guess this kind of changes gears about the finances, but what is the timeline for y’all being up and putting out produce up there?” he asked.

Curt Meltzer of Brooklyn, New York, a partner and Chief Operating Officer of Kentucky Fresh Harvest, took the floor to address Stanley and the court.

“First, I want to thank everybody and thank the town. You’ve been totally supportive from the beginning. As you know, this is taking longer to complete,” he said. “We could have planted now, but we don’t have a permanent heat source, yet, so we had no way to heat the first large greenhouse.”

“We decided to wait until February to do the actual planting in the nursery so that by April we’ll transfer the first plants into the greenhouse. They will be ready to be sold on the market beginning June. It’s a four-month cycle from planting the seed to go.”

Meltzer said that Tennessee Gas is helping to solve the problem of a lack of a heat source.

“Tennessee Gas has consented that we will be able to do a tap and build a pipeline. We’ve almost completed negotiations to get a CHP (Combined Heat & Power tap) which will take the gas and give us heat, electricity and CO2, which we will use as fertilizer,” he said.

According to Meltzer, Tennessee Gas cannot begin construction of the tap and pipeline until March due to the winter, so that’s why Kentucky Fresh Harvest didn’t have a heat solution this winter.

While the Kentucky Fresh Harvest project has been slowed due to a lack of a heat source, it has not been at a complete standstill.

“Since July and the end of this month, we’ve spent an additional $2.5-million. We’re spending $500,000 a month to push to complete all the construction We’re pushing to do that so that all the greenhouses are finished by the spring. That’s the goal and we believe we’re going to do it,” said Meltzer. “We’re learning from the winters here, which has killed us the last two years. We’re rushing now to put the plastic coverings over the remaining two greenhouses so that we can continue the inside work during the winter. We’re making very good progress on that right now.”

Metlzer said the timeline for having the greenhouses ready is next September.

The Fiscal Court on Tuesday approved the appointment of Mary Ann May and Sandy Caudill to the Lincoln County Extension Council on the homemakers side. Brenda Hammons and Susan Miller were also considered for the appointments. On the agriculture side, Ronnie Cooper was appointed to fill the unexpired term of the late Roy Lee Reichenbach. The term runs through Dec. 31, 2021. The other name submitted was Josh Brown.

The fiscal Court approved a pay increase for Lucas Wilburn, a mechanic with the road department who recently received CDL license, to $17.36/hour retroactive to Nov. 11.