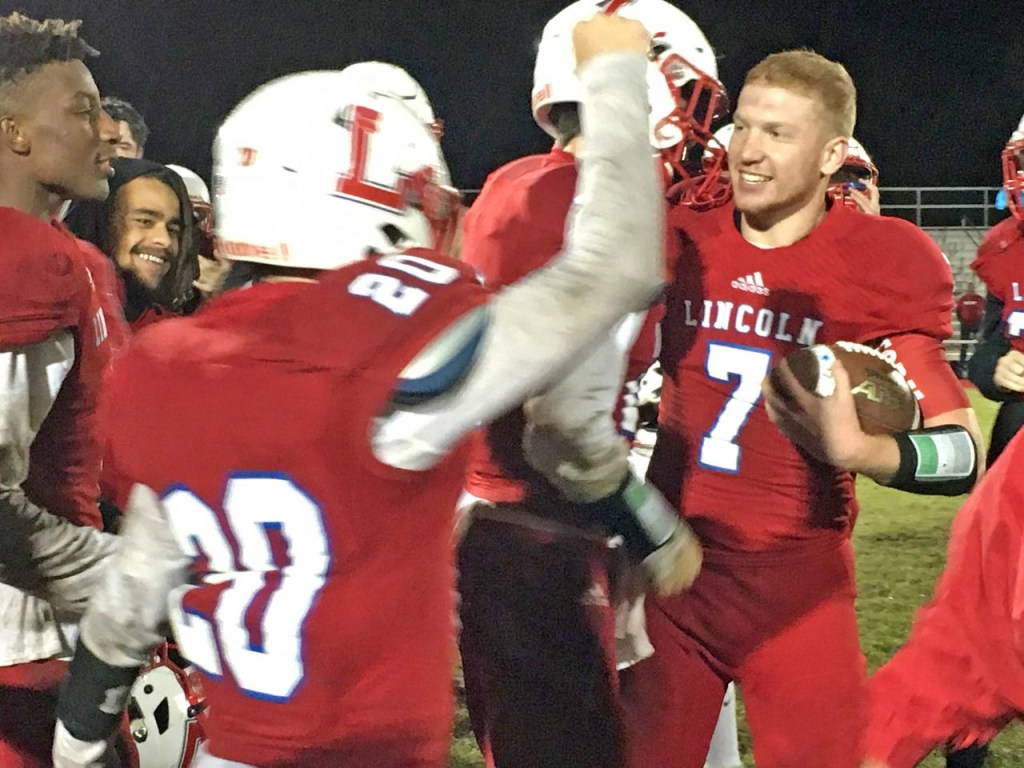 Photo by Nancy Leedy BRYSON YADEN is congratulated by teammates after being given the game ball from his record-setting night.

“Couldn’t have went to a better kid,” Lincoln coach Spencer Crutchfield said of Yaden’s achievement. “He’s bought in. Getting a new coach your senior year is not always a good thing. He’s been one of my leaders, my rocks I can count on. Proud as heck of that guy. He deserves all that he gets.”

Yaden needed 136 yards going into the game to surpass the current passing leader, Levi Rogers and he threw for 139 yards to reach 3,378 career passing yards. Rogers, now a Lincoln assistant, amassed 3,318 passing yards at the quarterback position and he passed the torch, making the presentation of the game ball to Yaden at the conclusion of Friday’s game.

Yaden finished 8-for-14 with one touchdown pass in the record-setting game. Yaden’s touchdown pass Friday came early in the second quarter and was a 23-yard completion to Carrier which put Lincoln up 14-6.

He also rushed for 32 yards and two touchdowns on nine carries in Friday’s win. Yaden scored the game-opening score on a 6-yard run, then scored on a 9-yard run with 2:21 left in the third quarter to put Lincoln on top to stay, 28-23.

This season, Yaden has completed 78 of 135 pass attempts for 1,042 yards and 12 touchdown passes. He has six interceptions.