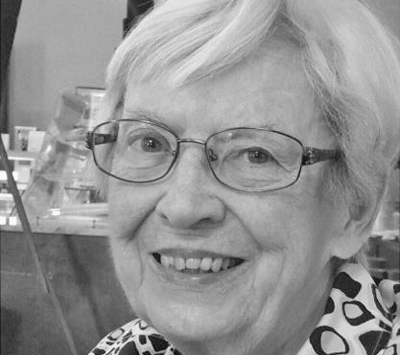 Daughter of Margaret Ruth Baldwin and Ralph Edward Leedy, she was born in Red House, Madison County, and raised in Stanford in Lincoln County. Lou worked as a legal secretary and executive assistant in Lexington and Louisville, and lived for a time in Phoenix, Ariz.,, with her cousin Ann House Souvall. After returning to Kentucky with her then-husband Richard Newland Grimes of Stanford, she settled in Louisville where she lovingly raised two children, Edward Sterling Grimes and Rachel Blair Grimes (Alec Johnson). She cherished time spent with family and friends, loved music and travel, and hosted countless fantastic meals. Lou possessed a keen sense of style, a sharp wit and an even sharper editor’s pencil.

She is survived by one brother, Bill Ed Leedy and one sister, Linda Jane Gilliam, both of Stanford.

She is preceded in death by her son and her sisters, Margilee Grace Harris and Mary Fred Schnitzler.

Her sweetness and light will be dearly missed by family, friends, and the caring people at Parkway. A memorial visitation will be held today (Thursday, Oct. 11) from 2 to 6 p.m. at the Peterson-Dumesnil House, 301 S. Peterson Ave., Louisville.

In lieu of flowers, donations may be made to Kentucky Humane Society or Hosparus Health of Louisville.