Baughman to be inducted into LWC Hall of Fame 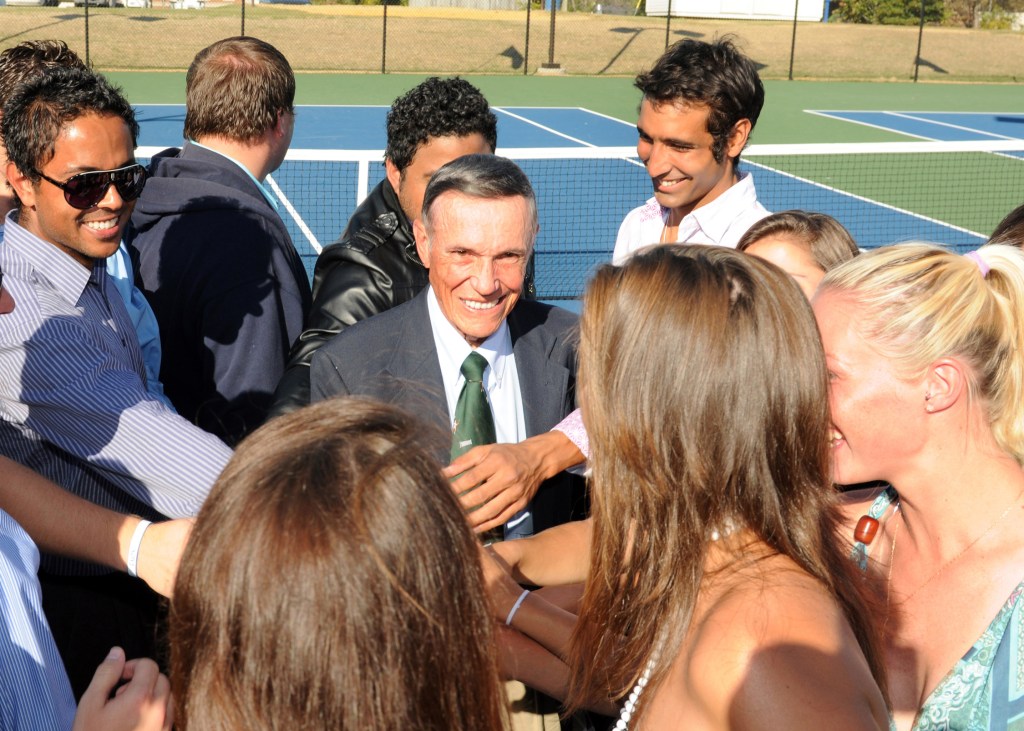 HENRY BAUGHMAN surrounded by well-wishers at the dedication of the Henry Baughman Tennis Complex at Lindsey Wilson College.

COLUMBIA, Ky. — Henry Baughman of Stanford will be inducted into the Lindsey Wilson College Athletics Hall of Fame on Saturday, Oct. 6, as part of Homecoming weekend on the A.P. White Campus.

Baughman, a philanthropist, is one of three to be enshrined in the LWC Athletics Hall of fame, joining former basketball coach Paul Peck and former baseball coach Mike Talley and philanthropist Dr. Henry Baughman in the 18th class of inductees.

“Coach Peck, Coach Talley, and Dr. Baughman have been great leaders within their sports and have made an indelible impact on Lindsey Wilson athletics,” LWC Athletics Director Willis Pooler said. “Our athletics department along with our student-athletes have truly benefited from their own individual and collective talents, dedication, guidance, and generosity.”

The 2018 class will be inducted at 11 a.m. CT Saturday at the Roberta D. Cranmer Dining & Conference Center. They will also be recognized later that day at the Lindsey Wilson-Cincinnati Christian (Ohio) football game.

Baughman was chosen to the Southern All-Star team for the USTA National Inter-Sectional Championships, where he won three gold medals on the teams that were seven-time national champions. He has won 18 National Public Parks’ tennis championships and five National Senior Olympic gold medals.

Baughman’s love for tennis and for Lindsey Wilson College led to him providing the lead gift to build the state-of-the-art Henry Baughman Tennis Complex on the LWC campus, which was dedicated on October 8, 2010.

Peck led Lindsey Wilson to 17 winning seasons during his 18 years on the LWC sideline. Peck led the Blue Raiders to their best season in school history during the 2012-13 season as Lindsey Wilson swept the Mid-South Conference regular season and tournament titles and reached the NAIA National Tournament’s Fab Four (national semifinals). Lindsey Wilson finished the season ranked No. 3 in the NAIA Division I Men’s Basketball Coaches’ Poll while ending with a 32-5 record. In 2003-04, Peck led the Blue Raiders to the program’s first-ever NAIA No. 1 ranking after starting the season 22-0.

Under Peck, the Blue Raiders reached the NAIA National Tournament eight times. Including the Fab Four appearance, the Blue Raiders reached the national quarterfinals twice.
During his first stint at Lindsey Wilson, Peck produced an overall record of 54-14 in two seasons. His team was nationally ranked both seasons while winning a pair of junior college state titles and a regional championship.

Peck retired on June 30, 2018, with more than half of Lindsey Wilson’s all-time wins as a four-year institution.

Prior to becoming the head coach, Talley was a student-athlete where he pitched for the Blue Raiders. He posted a 6-4 record in 30 career appearances.

Talley left coaching in 2011 and moved into an administrative role. He currently serves as the Lindsey Wilson Director of Athletic Facilities and leads the athletics department’s Champions of Character efforts.