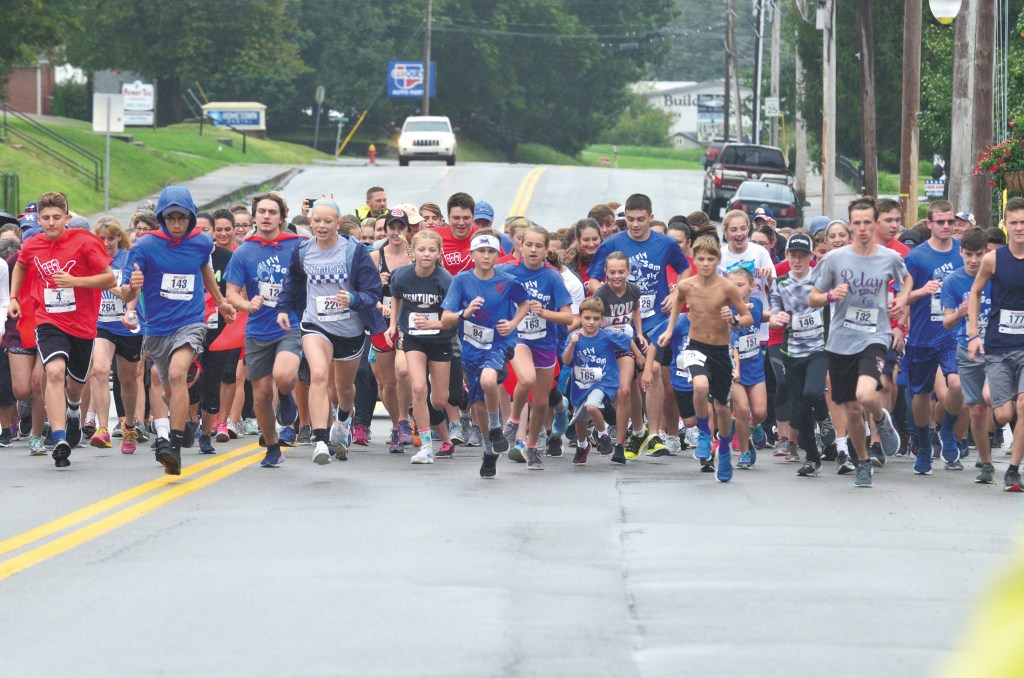 Photo by Nancy Leedy RUNNERS take off at the start of Sunday’s Fly Sam Fly 5K in downtown Stanford.

STANFORD — Thirteen-year-old Sam Singleton died unexpectedly on June 4, but he had a tremendous impact on countless people in such a short amount of time.

One of many testaments to his impact was witnessed in downtown Stanford Sunday afternoon. The day was rainy and overcast, but that did not stop more than 200 runners from coming out to honor Sam’s memory in the inaugural Fly Sam Fly 5K.

Tracy Singleton, Sam’s mom, said she was amazed at the huge turnout on such a dreary day. According to Tracy, 206 runners came from everywhere to participate, including one lady from Oregon and several family members and friends from Illinois and Louisville.

The proceeds from this and future Fly Sam Fly 5ks will go to the Sam Singleton Scholarship Fund, which will be awarded to Lincoln students participating in track and field, cross country and drama.

However, the purpose of the race is to honor the memory of an impactful young man. According to Tracy, Sam’s “light and the encouragement that he gave to everyone” and the fact that “he talked to everyone and made everyone feel important” were just some of the highlights that made him such a special kid.

Big sister Lucy remembered Sam’s sense of humor. She said that Sam “would make me laugh all the time” and “would always come back smiling” after they had a disagreement. Lucy also noted her brother’s “mischievous smile that always made him look like he was up to something” as one of his most endearing qualities.

Carissa Wardrip, whose son Davis was best of friends with Sam, organized the race in Sam’s honor. She also commented on Sam’s smile. “That smile! Nobody could resist that smile! It was one of those smiles that showed his personality and a little of his mischievous ways too.”

Calling Sam one of her “extra kids,” Wardrip called Sam a “bundle of personality wrapped up in a tiny little body.”

In addition to cross country and track, Sam was also involved in drama and acting. LCMS music teacher Carlee Cornett coached Sam in the various plays and musicals in which he participated. She commented on Sam’s service to others.

“Sam lived his life serving others just like Christ served others. He was definitely an example and inspiration to us all,” she said.

Throughout a time of such pain and sorrow, the Singleton family has relied on their faith in God and the fact that Sam knew Jesus as his Savior. On many occasions Tracy has remarked “God is good” and pointed to one of Sam’s favorite Bible verses. 1 Corinthians 9:24 says “Do you not know that those who run in a race all run, but only one receives the prize? Run in such a way that you may win.”

Sam Singleton lived an exceptional life for so young a person, but he ran in such a way that he did indeed win.