Photo by Abigail Whitehouse Smoke billows out of the first-floor windows as firefighters participate in a live-burn training event Sunday.

Photo by Abigail Whitehouse Firefighters from across the region rotate through Sunday's live burn training on the Lincoln-Casey County line. 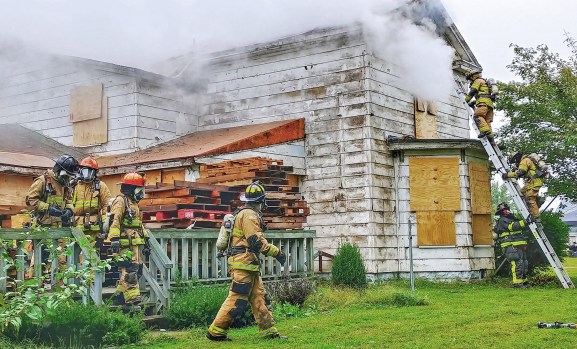 Photo by Abigail Whitehouse As one group of firefighters exits the structure, another group replaces the plywood on a window. 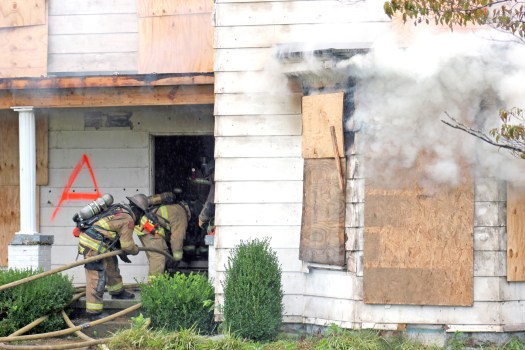 Photo by Abigail Whitehouse Firefighters adjust hoses as smoke rolls out of the first floor windows. 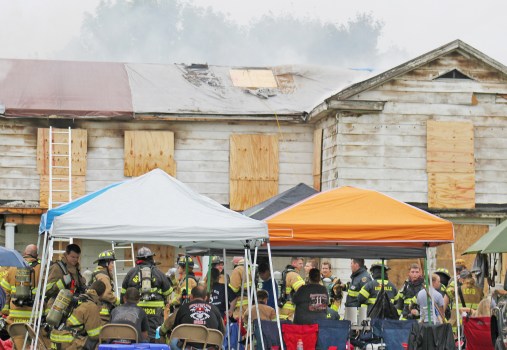 Photo by Abigail Whitehouse Firefighters from 16 different departments in the region gathered Sunday on the Lincoln-Casey County line to participate in a live house-burning event. 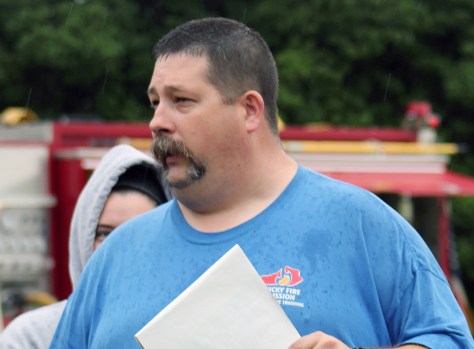 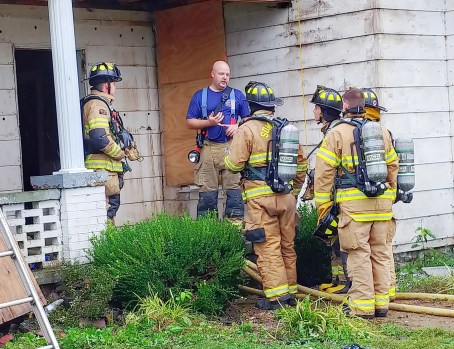 Photo by Abigail Whitehouse Instructor Ryan Kirkpatrick, of the Stanford Fire Department, prepares his group of firefighters before escorting them into the home.

HUSTONVILLE — Lincoln County firefighters joined 16 fire departments from across the region Sunday to participate in a live house-burning event on the Lincoln-Casey County line.

The training event brought more than 90 people together from five counties and lasted several hours as firefighters paired off into groups to test their skills and stamina inside a burning structure.

Dustin Whited, a former Lincoln County firefighter and current Captain with the Lexington Fire Department, coordinated the event with help from Lincoln County Fire Station 3, to provide essential training to firefighters in the area.

Whited said the empty home was donated by the owner and provided a rare opportunity for firefighters to get a sense of what it’s like inside a real structure fire, while having instructors on-hand to provide training and feedback.

The training focused on a variety of firefighting techniques and topics, including hose-advancement, fire behavior and heat, he said.

“If you go into a zero-visibility environment, which commonly is what happens in a fire…and you get really, really hot, it’s uncomfortable,” Whited said. “It’s the equivalent of getting stung by a bunch of bees all at the same time. When you’re in an uncomfortable environment, you’re in pain, and you can’t see, you take away some of those senses…it freaks people out.”

The purpose of the training was to familiarize firefighters with that uncomfortable setting.

“My goal is for them to feel some of the heat that they’re going to feel in a fire, be uncomfortable – I don’t want to hurt anybody, but I want them to be uncomfortable – so that tonight, when we go to a fire in Crab Orchard, or wherever, these people have felt this and they go ‘Ok, this sucks, but I’m ok,'” Whited said.

Firefighters were divided into multiple groups, each with their own instructor, and rotated throughout the house, which had been stripped of all carpet and hazardous materials prior to the training. Pallets and bales of straw were placed inside the rooms and used to light controlled fires for each group.

By the end of the training, Whited said 52 fires had been set.