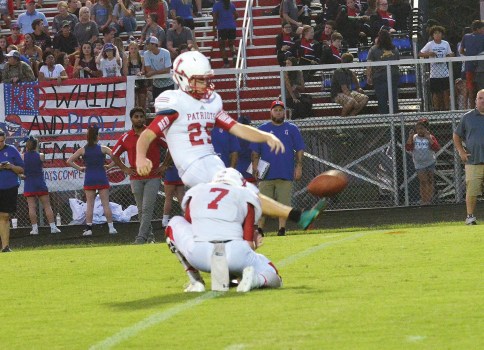 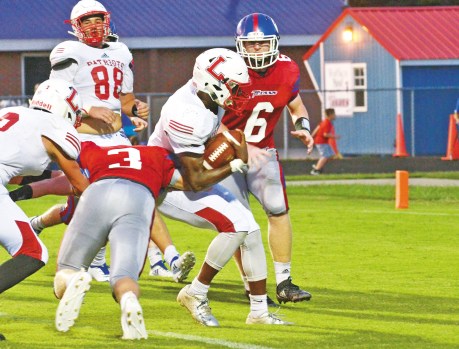 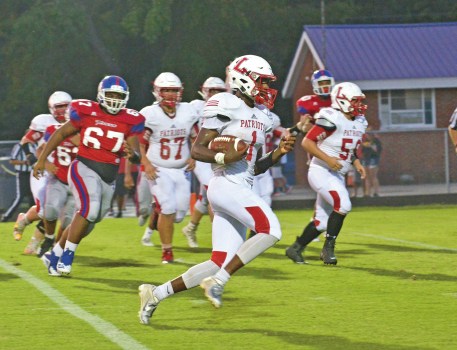 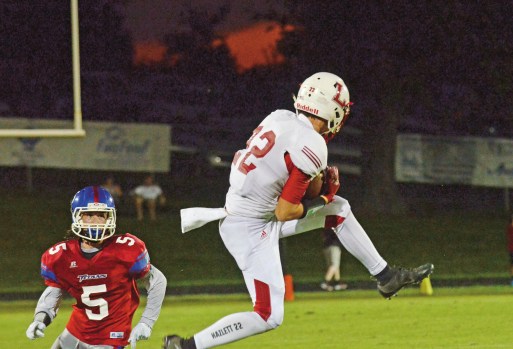 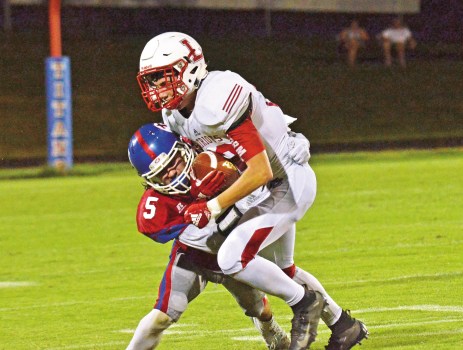 Photos by Nancy Leedy ZACK HAZLETT catches one of his four pass receptions in Lincoln's 28-14 win over host Mercer County Friday night. Hazlett broke a 14-14 tie with a 63-yard kickoff return to start the third quarter. 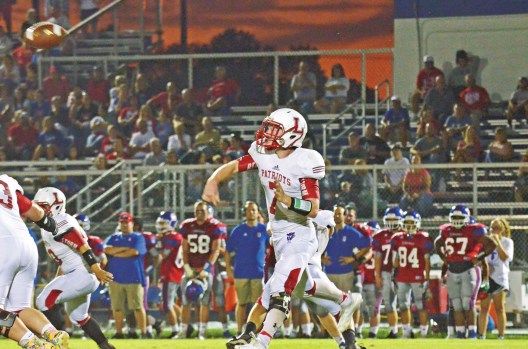 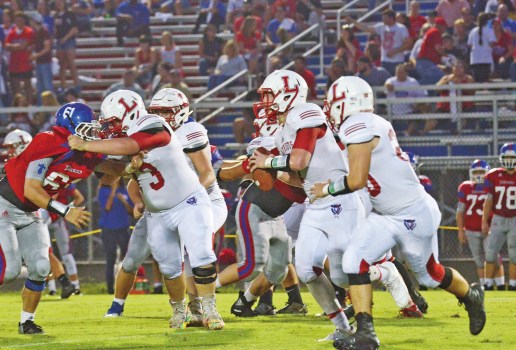 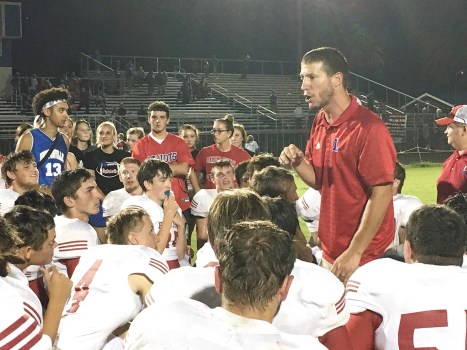 “That’s what we’re striving to do – win every week,” Lincoln coach Spencer Crutchfield said. “We definitely want to go out and get the win every time we step on the field.”

With the win, the Patriots surpassed their win total from last year (3), improving to 4-1 this season. Mercer dropped to 1-4.

As pleased as he was with the “W,” Crutchfield said he did not like everything he saw on the gridiron in the Patriots’ first road game.

“We played with no emotion in the first half and I challenged them. We have to dig deep and see what we’re about,” he said. “I said you have games where things just don’t go your way, you’re not doing things right, you’re not holding onto the football. I challenged those kids and they stepped up. They didn’t play perfect football but they definitely stood up and fought and that’s all I can ask of them.”

Things did not look good for Lincoln early as Mercer running back Malachi Yulee took the first play from the line of scrimmage in for a score. Yulee, who rushed for 196 yards and two touchdowns on 12 carries, ran 60 yards to the goal line to give the Titans a 7-0 lead just 15 seconds into the game.

Lincoln wasted little time answering Yulee’s opening touchdown, taking its first possession in for a score on the first play as well. The opening drive culminated in a 24-yard touchdown run by Darius Napier. Loren Melton added the point after kick to even the score at 7-all.

A Mercer fumble midway through the first period set up Napier’s second score of the night. Lincoln took possession at the Mercer 43 and, eight plays later, Napier, who finished with 81 yards and three TDs on 15 rushes, carried the ball in from the 4 for a 14-7 lead with 44.9 seconds left in the first quarter.

The Patriots recovered another Titan fumble on the ensuing possession, but the drive would stall at the Mercer 22. Melton, who was 4-for-4 on point after kicks, attempted a 39-yard field goal. The kick had the distance but was wide right.

Lincoln never trailed again, but Mercer would knot up the game before the half. Yulee scored his second touchdown with 2:53 left in the second quarter, carrying the ball in from the 6-yard line to make it 14-14.

Mercer struck quickly in the first half. Lincoln struck a little bit quicker to start the second half.

It took just 11 seconds for the Patriots to break the 14-14 tie, with Zack Hazlett returning the second-half opening kickoff 63 yards for a touchdown and a 21-14 Lincoln lead.

The night’s scoring ended with Napier crossing the goal line once again. The senior back pushed his way in from the 5-yard line with 10:17 to play for the 28-14 final.

“Our focus wasn’t there, but our effort was. That’s the key,” said Crutchfield. “Effort makes up for a lot and those kids … I have to give it to them. They battled their butts off.”

On paper, Mercer surpassed Lincoln offensively, finishing with 387 total yards on 42 plays compared to Lincoln’s 268 yards offense on 54 plays.The Titans had 285 yards rushing. The Patriots rushed for 166 yards. Bryson Yaden completed 11 of 15 passes for Lincoln for 102 yards and Kaelin Drakeford was 7 of 12 for 102 for Mercer. Both had one interception.

Lincoln forced five Mercer fumbles and got possession on four. Levi Daugherty, Tyler Williams, Napier and Yaden each had a fumble recovery.

Lincoln is idle this Friday night, but there will be no break in the Patriots’ practice schedule.

“We’ve been lucky and fortunate enough to win four in a row. Now, we’ve just got to go back and get to work and keep getting better and better,” Crutchfield said.