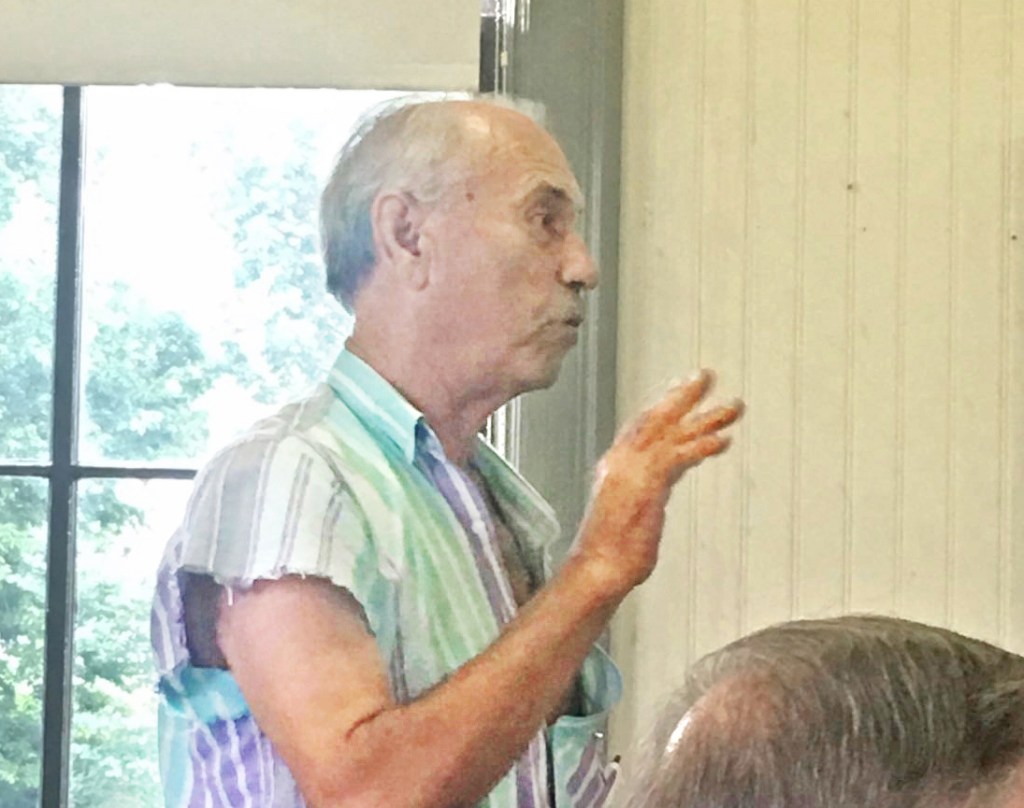 Photo by Amy Lu Stevens TOMMY OWENS speaking to the Stanford City Council in reference to violations regarding his property.

STANFORD — A hot September night turned even hotter inside the historic L&N Depot, as the Stanford City Council’s latest meeting devolved into accusations and lengthy arguments over whether city officials had given preferential treatment to a local property owner.

Tommy Owens has been the subject of discussion of late over whether his property — off U.S. 27 north of Stanford in the Hubble Road and Ridgeway Road area behind Walmart — is in compliance with the city’s nuisance ordinance.

Owens read from a July 12 issue of The Interior Journal concerning previous discussion of the matter by the city council. He was critical of council member Peggy Hester’s representation of the situation.

“She says that she’s had all these people out Hubble Road complaining about my little lot out there,” Owens said. “I’ve never had anybody complain to me and I’ve gotten calls from people who didn’t like the writeup.”

Owens continued, “Then I turn to Dr. James who don’t even really know me, and he says, ‘The truth is, I’ve lived in the city long enough (reading from IJ) to know that there’s a long history with Mr. Owens and his dealings with the city, which have been very costly to the city, and I think this citation is a good place to start.’ Thank you!”

“You don’t know the times when the two-feet of snow was on in the city and I sent two road graders and cleaned all the streets off and that I didn’t get paid for. I’ve done a whole lot (more) for this city than that. And you prescribe them narcotics at your thing and I know people that have died — your pills.”

“And Mr. Jacket!” Owens turned around to face the audience of citizens and Jim Jarrett, who serves on the Planning and Zoning Commission. “

“No, my name is Jarrett,” Jarrett answered, adding “I’ve lived here 40 years,” when Owens asked where he was from.

“So you know a lot about me, too. You’ve never seen me a day in your life, that I know of. What I’d like to do. You’ve got some paperwork for me for the city council and I would like to read it before I leave. I’ve already said what I want to say,” Owens said staring at the papers Jarrett had in the seat next to him.

“Could I see the paperwork?” Owens asked Mayor Eddie Carter, who referred to City Attorney Chris Reed, who said he could see it.

“The mayor has the letter. So you go up there and the mayor can give you the letter and let you read it. But you do not talk to me,” said Jarrett.

Jarrett turned to the back of the room, where Stanford Police Chief Zach Middleton sat and said, “Chief, can you calm him down? I’m not putting up with this.”
I’ll be alright,” Owens answered quickly.

Reading from the letter, Owens said, “Dear Members of the City Council and Mayor, it has come to the attention of the Planning and Zoning Commission that there are numerous violations of the city’s zoning and nuisance ordinance which have been continuously violated within the city limits.”

“Our concern became extreme,” he continued, “when it was discovered that the city enforcement officer was being directed by the mayor and the city attorney not to issue citations for these violations. That’s a lie.”

Jarrett asked, “Mayor! Mayor! Why is this going on? Why is a citizen reading a letter that was directed to you?”

Carter yelled back but the response was unintelligible.

Owens continued on. “Because I love Walmart and I want to shop there whenever I can … There appears to be property within the city limits that is being employed as a junk yard, which is how Tommy Owens makes his living and raised his family.”

“It doesn’t say that,” said Jarrett.

“Who signed it?” asked Jarrett, who knew that it was signed by the Planning and Zoning Commission and its attorney, Kirk Correll.

“Mr. Jacket. Don’t talk to me,” Owens said just before he left the room, followed by Middleton.
Owens’ actions did not sit well with the audience and some members of the council.

“Well, since citizens’ comments were going on, I think that was very uncalled for. You should have stopped it immediately. He threatened almost everyone in here,” said Amy Lu Stevens. “He did not read from the exact letter. He adlibbed it.”

“You should have stopped it,” added Jarrett.

“Look, we’re going to move on. We’re going to talk about that in executive session,” Carter said trying to quiet the crowd.

“No, we’re not going to move on,” said Jarrett.

“No, this isn’t executive session,” Hester said. “This (letter) is all signed by Planning and Zoning. Every member, including their attorney. There is no reason to go into executive session. We can discuss this right now. If he (Owens) can get up and have the floor, then surely, as a council, we can have our say and enforce the laws that are already on the books.”

Deatherage said that the council needs to address the negative comments going around on code enforcement.

“There’s a lot of comments that we’re not enforcing the laws the way we should,” Deatherage said. “If we’re going to have laws on the book then they’ve got to be enforced on everybody. There’s also accusations in here that the planning and zoning guy has been told not to serve violations. Has he been told not to serve them?”

“He told me that you did,” said Hester.

“No!” Carter said. “I never told him not to do anything.”

The question also arose as to how Owens even knew about the letter, which had been hand-delivered to the mailbox of only the mayor, the city council and Reed.

“How did Mr. Owens even know about this?” asked council member Scottie Ernst.

“How did he know of this letter before the meeting?” Ernst asked again.

“You’ll have to ask the mayor,” said Jarrett.

Owens then returned to the meeting.

“Mr. Owens, Tommy, how did you know about this letter that was going to be presented tonight?” Ernst asked.

“Just premonition,” said Owens. “Because he … I’d better not say anything.”
Owens’ response prompted a rapid pounding of the gavel.

“This should not be complicated,” she said. “We adopted as a council to endorse House Bill 422. That involves nuisances. I don’t care how property is zoned. When you have property that is devaluing the property around it, that’s causing a problem with the standard of living for the people in that community or that area of our city in our county, then it’s time to act. I don’t know why that we have to go through all these arguments. It’s very simple. If we enforce the ordinances that we have on the books then we wouldn’t be here tonight. We’d be here for a meeting. We wouldn’t have to discuss this. It’s very simple. The property rights belong to everybody. Not just to the property owners. If they refuse to comply with the ordinances – they’re out of compliance. Code Enforcement has a job to do and a violation needs to be served,” Hester continued.

Dr. James said his problem with the letter was the timing of it.

“Another thing that I see wrong is that that got into the hands of a citizen who’s got a problem with us trying to enforce House Bill 422 on him,” Hester jumped in. “That’s the whole problem. He wants to come in here and call people names and call you out. I’m not intimidated by him. If you all are, that’s your problem.”

“I talked to a lawyer right after our last meeting. I do not have to recuse myself. I do not, by law I do not,” said Hester, who had a relationship with Owens many years ago. “… I’ve heard from many people that live in the Hubble community and Ridgeway Drive … They’re all afraid of him. I don’t know why. It’s time for us to act like the council that we’re supposed to be. We were elected by the people.”

Council member Sara Givens made a motion that the city council attorney and the planning and zoning attorney meet to come to an agreement and that they seek the opinion of the Attorney General. Ernst seconded the motion. Hester was the only nay vote.