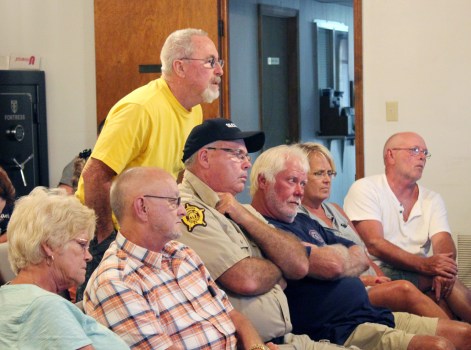 Photo by Abigail Whitehouse A mixture of nearby county residents and city residents attended the Crab Orchard City Commissioner's meeting last Thursday to voice their opinions on the sale of alcohol. City residents will be voting on the measure in November. 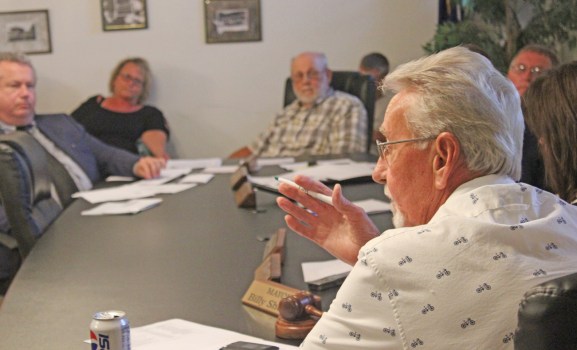 Photo by Abigail Whitehouse Mayor Billy Shelton talks to the public about his personal experience with alcohol during the city's regular meeting Thursday. 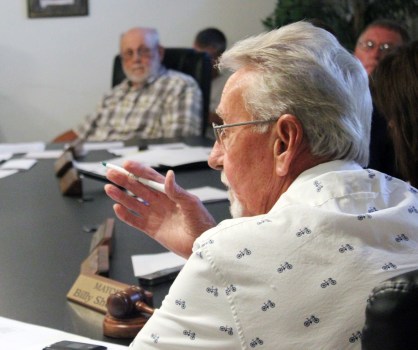 Photo by Abigail Whitehouse Mayor Billy Shelton talks to the public about his personal experience with alcohol during the city's regular meeting Thursday.

CRAB ORCHARD – While city residents will still be voting in November on whether to allow the sale of alcohol, the city will not be able to impose any alcohol regulatory fees or “sin tax,” according to the Kentucky League of Cities (KLC).

City Commissioners said Thursday during the city’s regular meeting that they were unaware of this information when signatures were gathered on a petition to bring a wet-dry vote to the ballot in November but they still supported bringing it to a vote.

According to a document shared during the meeting and attributed to Chris Johnson, a municipal law attorney with the KLC, the law related to alcohol regulatory fees only allows cities classified as Class 1 through 4 to impose fees on alcohol sales.

In 2014, Crab Orchard was classified as a Class 6 city, or population of 1,000 or less. In 2015, that changed with House Bill 331, which did away with the classifications and reclassified Crab Orchard as “Home Rule.” The following year, The Kentucky General Assembly removed the 3,000-population requirement, which then allowed cities like Crab Orchard to vote on a wet or dry status.

Despite this reclassification, the law “holds the status quo regarding alcohol regulatory fees” according to Johnson.
Johnson said in the document that because of this, Crab Orchard “cannot impose any alcohol regulatory fees, aka sin tax” and the city “will not receive any money from alcohol sales within the city.”

The possible revenue for Crab Orchard could come from a business license fee from possible new businesses, Johnson wrote.

Several members of the public attended Thursday’s meeting with a mixture of city and county residents expressing their opinions on the sale of alcohol in Crab Orchard.

City Commissioner Keith Saylor said Thursday that, despite the new information, he’s still in favor of alcohol sales in the city.

“In the last decade, there have been local option elections in nearly every corner of the state,” Saylor said. “The driving force behind that is economic. Most proponents of allowing alcohol sales view the move as a way to make their community more attractive to new and old businesses, while helping to create what economists call a positive balance of payments.”

“Everybody in this town runs to some other town to spend their money, I’d like to see some money spent in this town,” he said.

According to Johnson, there is a case in the Kentucky court system to allow Class 6 cities like Crab Orchard to impose an alcohol regulatory fee but said “it is not likely to be heard in the courts anytime soon” and “it is being vigorously opposed by the Alcohol Commission/PAC as an unfair tax.”

Commissioner Chris Sandlin asked Harold Lawrence, who lives outside of the city limits but voiced opposition to alcohol sales Thursday, what additional problems alcohol sales would bring to the city that don’t already exist.

“We’ve got the drugs, we’ve got the alcohol, they drive from Mount Vernon through Crab Orchard to Lancaster to get it. Let’s say they don’t have to drive through Crab Orchard. You know as well as I do somebody drinking in Mount Vernon that’s driving to Lancaster, they’re going to drink five or six there, and they’re going to get it cold and drink five or six on the drive back,” Sandlin said. “So how many more problems are we going to have in Crab Orchard by voting it wet?”

As the discussion heated up, Commissioner Jerry Shelton interrupted and told the mayor to “stop the meeting or remove (them),” referring to out-of-city residents who were voicing their opinions on the topic, despite the fact that they won’t be voting on the issue in November.

City Attorney John Hackley suggested the mayor ask if there were any city residents in the audience who would like to express an opinion.

“We do, we have people here,” Billy Shelton said. “Anybody that lives near here, I think, should be able to express their opinion.”

Sandlin disagreed and said business owners who work in the city and live outside the limits don’t get to vote on the issue either.

Wayne Blunt, a city resident, said if an alcoholic gets off work and alcohol is right in front of him, he’s more likely to buy it.

Sandlin said he’s never known anyone to choose not to drink because they had to drive to Lancaster to buy it.

“People who drink now are going to drink if they have to drive…I used to drive with dad to get beer in Lawrenceburg, Nicholasville,” Sandlin said.

A few members of the public told commissioners they didn’t think the petition would have gathered as many signatures if the public had known this information prior to signing it.

Mayor Billy Shelton shared his own personal experience with alcohol – one of several reasons he is not in favor of alcohol sales in the city.

“I left home at 17 because of my father,” he said. “…He beat my mother. I slept in the barn behind our house because he tried to cut my throat, he tried to stab me. He tried to kill me. He told me he would kill me and I lived with that. I just can’t see it, I can’t see anybody in this town having to do that.”

In contrast, Police Chief Jimmy Gipson said it’s because of his experience with alcoholism in his family that he became a police officer and has been one for 37 years.

Gipson said there will always be drunks out there and they’re going to go different place to get it.

“That’s why we have a police force…” he said. “I talked to a guy today, he’s an alcoholic…he’s wrecked his vehicle three times in the past four years coming from Lancaster because of alcohol. He went to Lancaster, got it, and started drinking before he came back…”

Beth Carpenter, who resides in the city, said there’s a lot more irresponsible drinking today than there has been in the past.

Carpenter said she worries about children in the city getting hit by drunk drivers.

“I keep thinking about these little kids that ride up and down on their bicycles and walk this road right here that I live on. Even though their parents don’t care where they are, don’t know where they are, it worries me,” Carpenter said. “This is where we’ll see somebody get hurt.”

Eldridge said being a dry city doesn’t prevent those things from happening.

As the 45-minute discussion turned into a loud dispute among members of the public, commissioners voted to adjourn the meeting.

SO YOU KNOW
City residents will vote Nov. 6 to determine whether alcohol sales will be permitted in Crab Orchard.