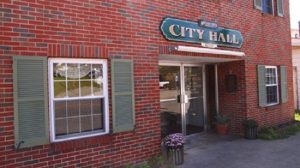 STANFORD – After a few residential property owners voiced concerns about being annexed into the City of Stanford, council members agreed to remove them from the city’s southern annexation plan.

During the council’s regular meeting in August, a handful of property owners approached council members about the annexation, which intends to extend the city limits about a mile-and-a-half south along U.S. 27.

In a special called meeting last Monday night, council members continued the annexation discussion and were provided a new annexation map that removed the two residential properties that did not want to be annexed. The properties are owned by Wayne Terry and Peggy and Hubert Demarse, who all attended last month’s meeting.

Sheila Mullins, who owns about 22 acres of land on U.S. 27, originally opposed being annexed and returned Monday night to reiterate her opposition.

“That’s what we’re here tonight for,” Carter said. “We have two residents that changed their mind and this lady back here obviously doesn’t want to be in.”

The residential property owners told council members they would like to be able to receive sewer services if annexed into the city, but according to former Water Board Commissioner Ella Mae Curlis, the city cannot expand it’s sewer services until it has completed upgrades to downtown sewer lines.

“It could be 40 years. It might not be in yours or my lifetime,” Curlis said.

Mullins’ property is situated in the center of the proposed annexation.

Fire Chief Scott Maples said removing Mullins’ 22 acres of agricultural property won’t be much of a loss to the city, as far as revenue.

Mullins said if she had the right to vote and could receive city sewer, she would be willing to join the city.

Charles and Pamela Wilson, owners of Eagle Run Storage, had also expressed concerns with the annexation during the August council meeting.

Ernst said if the city were to start taking businesses out of the annexation plan then the whole plan would be pointless.

“If you start taking out businesses then there’s no use in doing it at all,” Ernst said.

Several businesses do want to be annexed, however, Maples added.

“Whenever we get the new description, I’ll write a new ordinance, then we’ll have a first reading. We’ll put it in the paper and then the notice will go out to all of the residents and then we’ll wait the statutory time and have the second reading,” said City Attorney Christopher Reed.