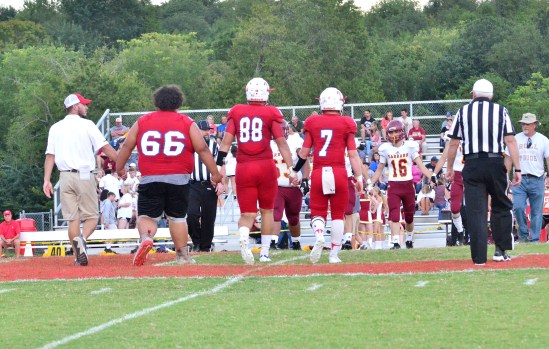 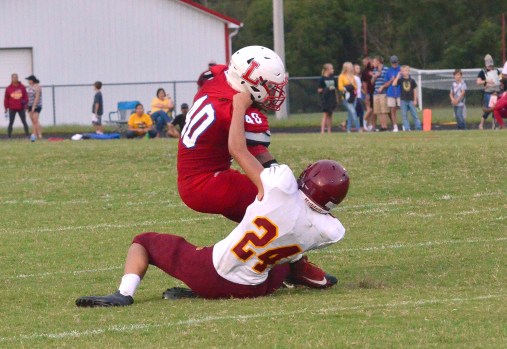 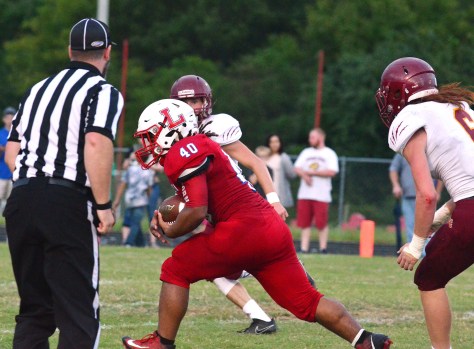 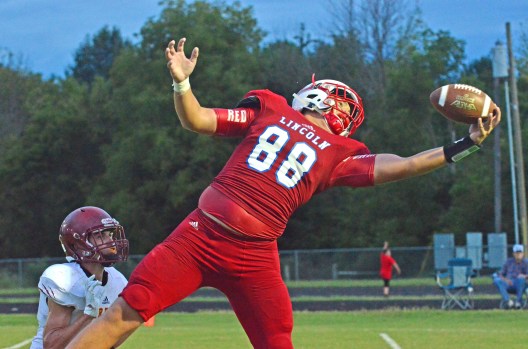 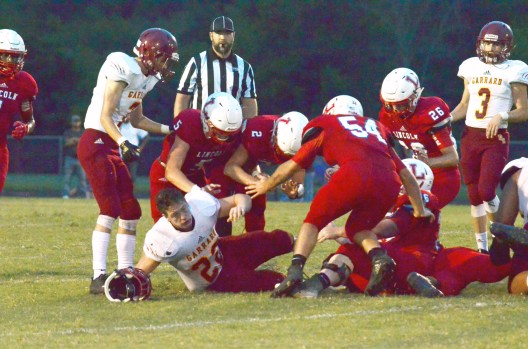 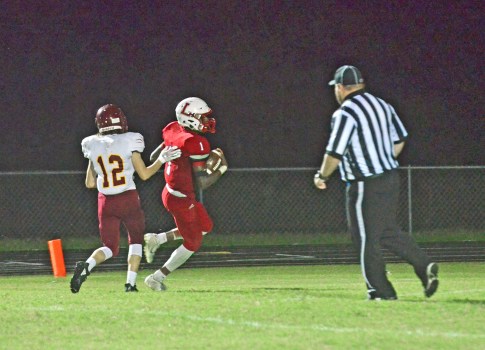 The cheer, which use to be a standard at Lincoln County football games back when the Patriots were making deep runs in postseason play, rose from the Lincoln County bleachers Friday night as time wound down on the team’s 35-20 win over Garrard County.

While pleased with the win over his alma mater, Lincoln coach Spencer Crutchfield said the Patriots’ play had some flaws.

“It wasn’t a perfect game, and I told the kids that, but I can’t fault their effort,” he said. “We played hard. We didn’t play great assignment football, but we played hard and we didn’t give up and that’s the most important thing. I’m really happy for the kids.”

Things did not look good for Lincoln (2-1) at the start of the game, as the team fumbled the ball on the opening kickoff to set up a four-yard touchdown by Garrard’s workhorse David Pennington.

“That happens and I told the kids we have to respond,” Crutchfield said. “We did. We responded and got back on top. You want your kids to have fight and show resiliency, and our kids showed they had that in them.”

After fumbling the opening kickoff, which set up Garrard’s score, Lincoln quarterback Bryson Yaden redeemed himself on the Patriots’ first possession, He returned the kickoff to midfield, hit Darius Napier for a first-down pass, then rushed 23 yards for a first down before capping off the five-play drive with a 17-yard touchdown pass to Sawyer Carrier.

Loren Melton booted the point after kick to put the Pats up 7-6 and Lincoln never trailed again.

The Patriot senior led his team with 74 yards and a touchdown on six carries and five receptions for 83 yards and two TD catches.

Garrard’s Jacob Hacker interrupted the Lincoln run with 4:04 left in the second quarter, scoring from two-yards out. However, the Patriots answered 49 seconds later with Ethan Carman scoring on a 44-yard pinball run that saw the senior running back running through, around, over and bouncing off Garrard defenders on his way to the endzone to give Lincoln a 28-12 halftime lead.

Napier, who had an interception called back on a personal foul penalty in the second quarter, would get credit for a pick in the third quarter. He ran the interception back to the Garrard 25-yard line then, two plays later, he added his second touchdown pass, taking a Yaden pass 23 yards to the goal line to make it 35-12.

The Patriot offense would rack up 291 yards total offense in the win, including 188 yards rushing with two touchdowns. Carman had 66 yards and a TD on 11 carries. Yaden was 7-for-9 for the night for 103 yards and three touchdown passes.

“We ran the ball very well today, and we threw it well, too,” said Crutchfield. “We won the battle up front on the offensive side of the ball. Now, on the defensive side of the ball … I wouldn’t say we lost, but we didn’t really play the way we were supposed to play. Offensively, I felt good about us getting off the football. We drove them back, which was big for us. We were able to establish the run which helps our defense because the clock runs. Definitely proud of those guys up front. We definitely had guys that we need to step up and make big plays, step up and make big plays.”

Garrard (1-2) would score the last touchdown of the night. Christian Hansford picked up the six on a two-yard run. Brice Burkhart ran in the two-point conversion.

The Lions finished with more offensive yards then the Patriots, amassing 301 total yards. Pennington rushed for 115 yards and a touchdown on 18 carries to lead the ground game. Garrard had 254 rushing yards. Hansford ran for 63 yards and a TD and Hacker had 33 yards and a score.

Garrard earned most of those rushing yards by shooting through the middle of the Lincoln defense.

“That’s what they do,” said Crutchfield. “They’re really good up front. They’re big up front. Got to give hats off to those guys. They’ll battle you hard. They get off the ball well. And the Pennington kid, if you don’t wrap up, he’s not going down. He runs the ball hard.”

Burkhart completed 4 of 11 passes for 57 yards with one interception.

“We wanted to make sure we came out and remembered him and his family,” said Crutchfield. “There’s bigger things than football in life. We wanted to show him that we’re there for him.”