Lincoln gets Crutchfield his first win as head coach 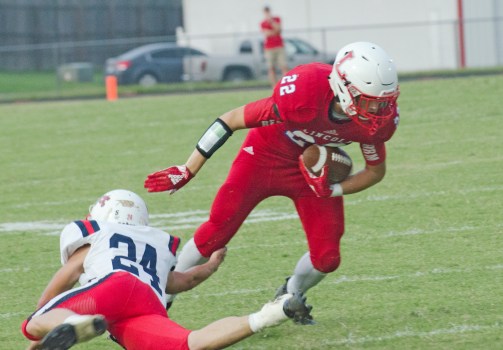 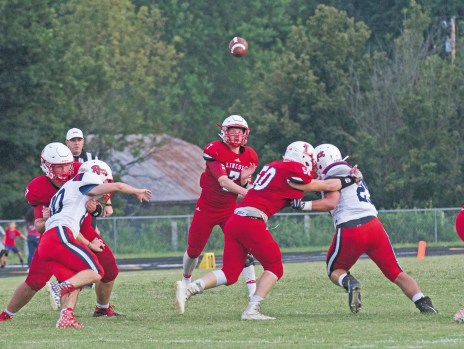 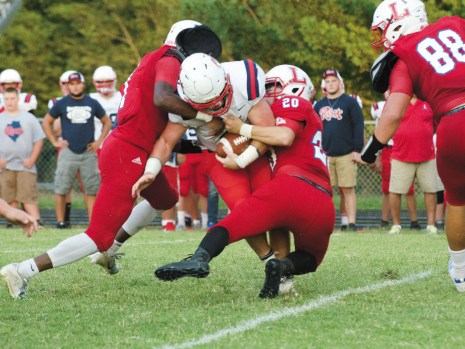 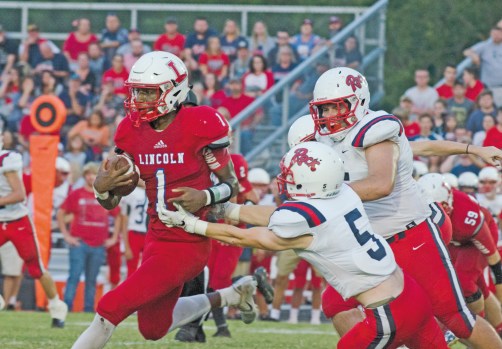 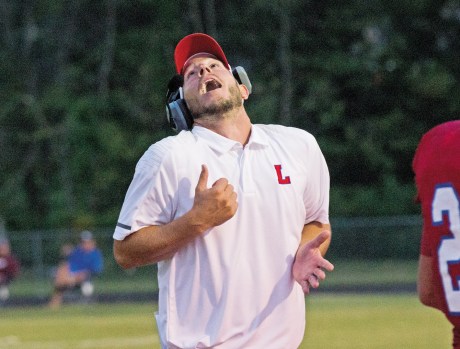 STANFORD — The first win is unforgettable.

Every coach will tell you they remember it. It doesn’t matter if it’s a blowout or a nail-biter or if it ends in a dousing of ice water or a simple handshake, the first win for a head football coach is always sweet.

For first-year Lincoln coach Spencer Crutchfield, Friday night’s 44-13 win over Rockcastle County had a little extra sweetness to it.

Neither the Lincoln offense nor the defense got much opportunity to show their new coach what they could do in the Patriots’ disappointing 41-0 loss to Somerset last Friday, with turnovers dooming their season opener. Friday night, however, they would deliver with a crisp game, using an early offense and strong defense to shoot down the Rockets for the first time since 2007.

Senior speedster Darius Napier was on the receiving end of eight of Yaden’s passes for 119 yards. He had TD receptions of 21 and 69 yards. Nick Harris had only one reception, but he took the pass 66 yards in for a score. Sawyer Carrier had two catches for 66 yards and Zack Hazlett caught two passes for 23 yards.

Rockcastle, which amassed 383 yards offense in its opener, was held to 244 yards Friday night, 229 rushing yards. Sophomore quarterback Noah Parkey was sacked two times and finished with (-11) yards rushing. He completed only one of four pass attempts for 15 yards.

The Rockets senior running back Jaden Payne, who rushed for 233 yards and four touchdowns in Rockcastle’s 40-30 season-opening win over Paris, provided the bulk of his team’s offense Friday at Lincoln, but the Patriot defense kept him out of the endzone. He finished with 108 yards rushing on 19 carries.

“He carries their workload. You definitely have to try to take him away,” Crutchfield said of Payne. “We weren’t able to completely take him away, but we definitely got enough guys to him to where we kind of slowed him down tonight. My guys, I’ve got to give them all the credit. They stepped up and executed the way they were supposed to. That’s how you’re successful in football games. You take your coaching, you play your responsibility, we’ll put you in a position and you’ve got to make plays. We were able to do that tonight.”

Lincoln (1-1) never trailed Friday, punching in the first two scores of the game.

A 44-yard pass play from Yaden to Carrier helped set up the first touchdown. Lincoln, which took its second possession at the Rockcastle 46, was facing 4th-and-12 when Yaden hit Carrier for the pass. The Lincoln sideline and fans celebrated what they thought was a touchdown but the officials said Carrier stepped out at the 4. Two plays later, Yaden dove up the middle from 2-yards out and Loren Melton booted the first of his five point after kicks to put the Patriots up 7-0 with 2:24 to go in the first quarter.
Lincoln was back in the endzone less than three minutes later. Napier pulled in his first TD reception on the fifth play of the 44-yard drive, taking the pass in from 21 yards out to make it 13-0 with 11:50 till to go in the second quarter.

The Patriots would distance themselves from the Rockets in a big way in the second quarter. Rockcastle (1-1) answered Napier’s TD catch with a 25-yard tourchdown run by Logan Brown with 10:38 left in the half, but Lincoln would score on all four of its possessions in the second period to blow the game open.

Less than a minute after Brown’s touchdown, Yaden hit Napier for a 69-yard TD pass to extend Lincoln’s lead to 20-7. Napier then recovered a fumble by Brown to set the Patriots up at the Rockcastle 33-yard line. The short drive culminated in an 11-yard push up the middle by Yaden for a 27-7 margin. Lincoln tacked on one last score just before the break, with Yaden hitting Harris for a 66-yard touchdown pass with 42.5 ticks left on the clock to put the Pats up 34-7.

Melton converted on a 30-yard field goal midway through the third quarter to cushion the Lincoln lead to 37-7.

Lincoln posted its biggest lead of the night, 44-7, with 10:42 to play after Yaden scored on a two-yard run. The score put the game on a running clock.

Rockcastle would score the night’s final touchdown. On the first play after the ensuing kickoff, Hunter Sargent ran 68 yards to the goal line for the 44-13 final.

In the postgame huddle, Crutchfield could not contain his excitement and pride when talking to his team.

“I’m proud of them. They prepared hard all week,” he said. “They came in and kind of took the challenge I gave them about being the most physical team on the field, getting all 11 people the football. They accepted the challenge and they executed. That’s what I’m most proud of them about. I’m excited for them. They put in the work and it paid off.”

Defensively, Dylan Burchfield had 13 tackles (2 solos, 11 assists) and Hunter Combs and Darius Napier each had 11 tackles. Combs had two solos and nine assists while Napier had four solos and seven assists. Levi Daugherty and Darren Griffin both had eight tackles (two solos, six assists). Those with tackles for losses were: Combs (2), Carrier (2), Napier, Daugherty and Tyler Williams.