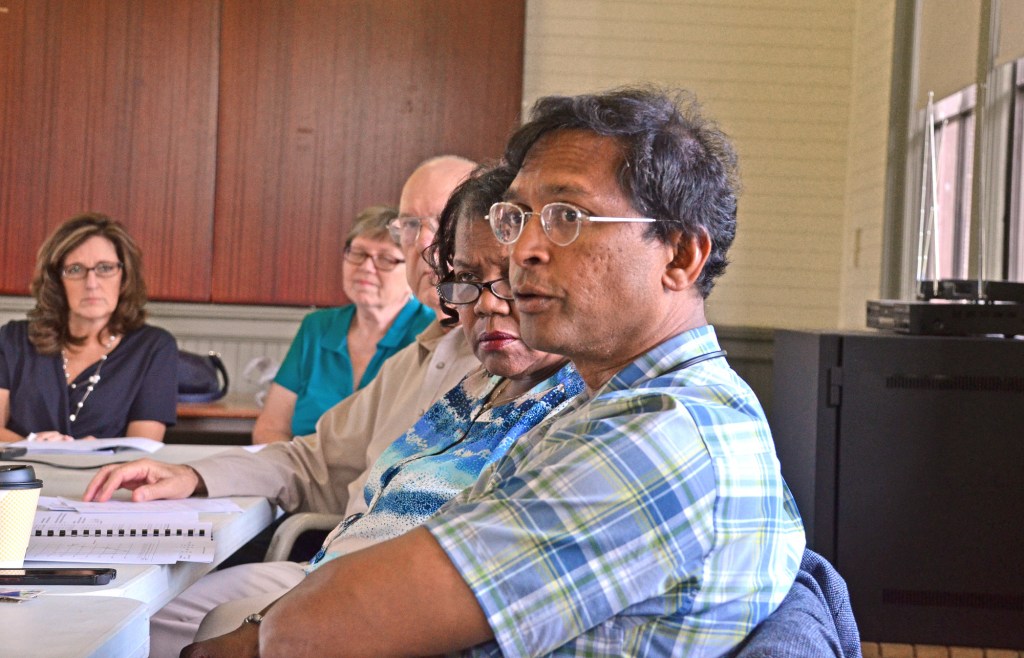 STANFORD — The council for the City of Stanford held a special called meeting on Aug. 16 to address the issue of adding the newly-hired city clerk’s name to the city’s bank accounts and to discuss proposed litigation and employee discipline.

There would be no action per KRS 61.810 (1) (C) (discussion of proposed litigation) and KRS 61.810 (1) (F) (employee discipline). After a lengthy executive session, the council reconvened and, when questioned on what happened, Dr. James spoke on behalf of the council saying, “We have taken no official action.”

While the meeting was called to address the changing of names on the city’s accounts and the KRS items, the biggest part of the evening was spent hearing the city’s 2017 audit review from Craig Butler, a partner in the accounting firm of Kerbaugh, Rodes and Butler, PLLC.

Butler said that the budget showed no areas of concern.

“It was unqualified, which means it’s a clean opinion. Unqualified means that we performed the audit and found that your financial statements were fairly stable without any qualification to them,” he said. “So unqualified is the opinion that you strive to get.”

In reviewing the audit for the council, Butler touched on a few numbers, most particularly the city’s budget compared to total revenues.

“Generally when I speak with a commission or council one of the primary ways to measure success for each year is how close you came to your budget,” Butler said. “If you look at your income statement compared to budget for the year and if you look at your total revenues, your total revenues were $2,071,000 for the year. But you budgeted to take in for the year $2,057,000 dollars. So that means that, for the year, you brought in $14,000 more than you had budgeted for. And that’s really a great estimate. Within $14,000 of your projection on a $2-million budget for revenues, in a nutshell, is really good.”

The council not only brought in more revenue than budgeted, it also spent less over the fiscal year.

The only real issue Butler said he had in doing the city’s audit was with locating documents.

“There were no major findings. The only problems we really had, and there were some turnovers, was we had trouble locating documents because the filing ways were different. That’s not a big problem. We just had a little more trouble finding documents.”

Following Butler’s presentation of the audit, one of the main questions coming from the Stanford City Council was on the timing of the report, with council member Scottie Ernst asking, “Why are we getting the June 2017 audit and not any more current (numbers)?”

“We usually don’t get the stuff to start working on an audit until September or October,” Butler answered. “June 30 of (20)18 is more relevant than June 30 of 17. I don’t like to issue an audit a year after the fiscal year, so I would like to get it to be more timely (Jan./Feb.).”

Ernst asked Butler if he would be able to do that this year, but Butler had no definite answer.

“I can’t promise that,” he said. “We will just see how it goes as far as obtaining documentation and how things go. I think this is the latest we’ve issued an audit.”

Butler did have June 30, 2018 statement numbers in hand at the meeting and he shared those with the council and the mayor.

“it came out well, too, but the 18 numbers are not audited yet,” Butler said. “We can’t give it our seal of approval because it hasn’t been audited yet.”

“So you spent $64,000 more than what you had budgeted. Although, that was obviously made up with the revenues,” Butler said. “Your net is what you really look at. In your budget, you budgeted to spend $99,400 more than what you brought in for that fiscal year which is okay because you had the fund balance to start out with to be able to sustain a deficit. In actuality, you only spent $12,000 more than you took in, and a $12,000 variance on a $2.2-million expenditure is just incredibly close. Again, these are not audited.”

Dr. James and Peggy Hester both inquired of Butler if he could help when it came time to prepare the next budget.

“I think budget would be better if you were involved,” James said. “Before we make decision on taxation on budget, we need your assessment, your professional opinion or projection.”

Butler said he was open to assisting the council

“We are here to help you in any way we can,” he said. “We have to maintain our independence as auditors. We can’t come in and make decisions and things like that. We can counsel you. We can give you a projection.”