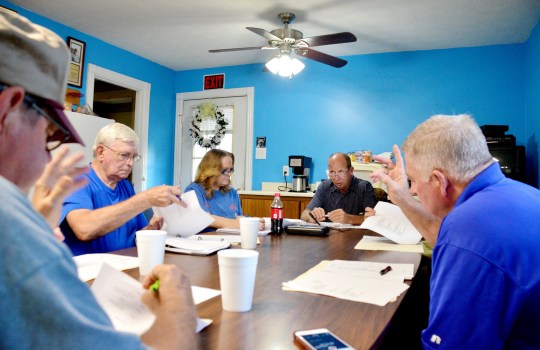 Photo by Nancy Leedy HUSTONVILLE MAYOR David Peyton takes a poll of the city council on approving the city bills payable early in last Tuesday's monthly meeting. Also pictured are, from left, councilmen Cecil Maddox and Alan Sims, city clerk Rita Clem and councilman Jimmy Evans. The council could not agree to vote later in the meeting when Peyton announced his veto of the council's approved city and water department pay scale. The council agreed to table the subject until next month. 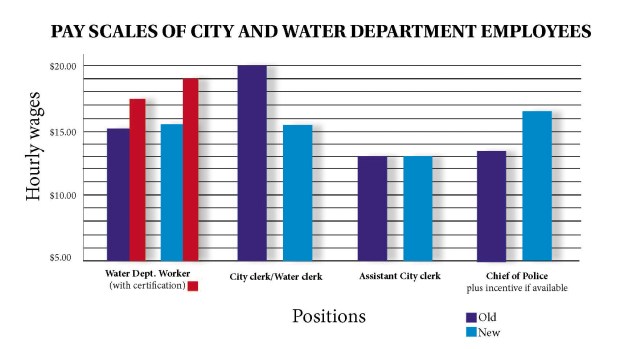 HUSTONVILLE — In its July meeting, the Hustonville City County voted unanimously to accept a new pay scale for city and water employees.

When the council met again last Tuesday, Mayor David Peyton informed the members that he had vetoed the proposed pay scale.

“After last month’s meeting, I contacted Jonathan (Baker, city attorney) and used my veto authority, so we’ve got to look at that again,” Peyton said.

When asked by councilman Jimmy Evans why he had vetoed the pay scale, Peyton didn’t mince any words.

“The wages were excessive for only five years of service,” Peyton responded. “I think part of it may have been that you were looking at how many years of service employees here have put in. Like Rita (Clem), the city clerk, was at $20 an hour at five years. Well, Rita’s been here 15 years and she doesn’t make that yet. So if you hire somebody in, they topped out at $20 on the pay scale in just five years. In 15 years, you are going to be paying that person $26-something an hour.”

The council table fell quiet after Peyton’s response and then Evans spoke up again.

“I guess I didn’t consider that,” he said. “We were just trying to help the water employees out.”

“I totally understand that,” Peyton answered. “I couldn’t see hiring a new person and in five years they reach a point that somebody that’s been here 15 years hasn’t reached yet. I was looking at this. Griffin (Harness) will get certified, he’s got his two years in. So, in five years, he’ll be making more than Mark (pointing at another employee) is making after 10 years of service, so that’s why the veto.”

Baker informed the council that they had the right to override the veto, majority plus one, and they could work on a new pay scale. But that if they didn’t override it, the veto stands.

“It’s going to be hard to please everybody,” said Evans. “At some point and time, they’ve got to make the decision if they want to keep working for us or if they want to look elsewhere. We do all we can do for them.”

Peyton presented a new pay scale to the council which included lower raises for most positions (see Table B). A big exception on the new proposal is that a new chief of police would make $16.25 an hour after five years. On the pay scale that was vetoed, the pay after five years was $13.55 an hour. Peyton also said that he would like to see $2 raises across the board for the 10-year to 15-year employees.

The council members – Evans, Dudley Hardin, Cecil Maddox, Alan Sims and Marc Spivey – all agreed that the city and water employees deserved a raise, but no decision could be made, so the vote on the veto was tabled until next month, with retro pay back to July 1.

The employee pay scale was not the only subject tabled until a later date. The council also postponed revision of the city’s grass ordinance. At issue, was property owners that were not compliant on cutting their grass.

“I think our ordinance, instead of leaving it a gray area, I think it should be spelled out if agricultural property or not,” Peyton said. “If they’re not going to harvest hay off of it. I think they need to keep it down. Doesn’t have to be like a lawn, but should be kept down.”

The council did make a move on the item of paving Barnett Street, accepting the bid of $10,028 from the Allen Co. The bid included asphalt surface, milled 18” wide transition edges at Merriman Street and KY 78. For an additional $7.50 a linear foot, the council also voted for 18” transition edges at the driveways to prevent drop-offs from new asphalt.

“That definitely is the worst street in town,” said Peyton. “It needs attention.”

The council also voted to not raise 2018 property and tangible tax rates.

There was no action needed on one portion of the council meeting Tuesday, as Craig Butler and Chad Robinson of the accounting firm of Kerbaugh, Rodes and Butler, PLLC, of Danville presented their overview of the city’s audit.

“There were no major findings of any concern,” Butler said. “Having somebody in the position for so long and knowing what they are doing (Rita Clem) is a great help to us and to the city. Obviously, since Rita does everything, there’s always that issue of segregation of duties where you have one person doing everything. You really can’t get around that and I see no reason to change that. As long as you guys continue to ask questions during meetings that’s good. Keep looking out and questioning them.”

Butler just hit on a couple highlights when going over the audit, particularly how the city did with its budget.

“I think this is one of the most important statements for the general fund is how you did compared to how you budgeted,” he said. “You guys obviously budgeted for that EMS project to be in full swing last year, and when I say last year, this is June 30, 2017. It’s kind of gone dormant for a while now so you’ve not had a lot of activity related to the project so that revenue variance of $719,000 that’s not really anything to worry about. It’s just that the project wasn’t really up and going. Your other revenue variances were very minor.”

“Your revenue for taxes, licenses and charges for services were all pretty good. You made pretty good estimates on those,” he added. “If you get down to expenses, you did really well in every category. You were under in general, police and fire and street. Of course, that capital outlay had to do with the EMS building also so that’s why there’s very little expense on that.”

Hustonville’s net for the year got a big thumbs up from Butler.

“If you go down three lines from the bottom there is a line that is net change in fund variance. If you go down to the variance column, you missed your budget by net of $158. In other words, you budgeted to break even for the year and you spent $158 more than you took in. That’s as close as you can get,” he said. “I know you amend your budgets and all that, which you should do that to reflect what’s going on. You tried to break even and spent $158 more than took in. That’s very good.”

“All and all, your results of operations were healthy for 2017,” Butler said. “And seeing increase in the bank balance, all things being equal, is a good sign. I don’t think it takes an auditor to tell you that.”

“All and all it was a clean audit.”

The positive report, however, couldn’t keep Peyton from voicing concern.

“I’m worried are there any concerns about bankruptcy for the water department and the City of Hustonville,” he asked.

“No, not based on this,” said Butler. “Obviously, the general fund for a town this size is going to struggle. They all do, Crab Orchard and you all, because you don’t have a lot of tax revenue and have an older population and probably there is a lot of your population that has homestead exemption.”
In our profession, if we have a growing concern that a client is going to not be around, we have to put it in the audit report that you can’t go on unless radical changes are made. If I saw trouble coming, I wouldn’t wait until the audit.”

In other business, Peyton gave an update on the fire EMS project Tuesday, noting that he wasn’t pleased with the project but that they have “turned it up some.” He said they should have the slab done soon and that the building is ordered and to be delivered the first week of September. He said they were looking at a Jan. 31 completion date.

Sims gave an update on the state of the city’s park, which was destroyed during the recent floods. During a walk-through of the park, ideas were tossed around about what could be done with the park and what facilities were desired. Sims said that he would be going to a meeting in Stanford in September for help in writing grants to get extra money for the project.