GOING OUT ON TOP: Mullins caps off high school archery career with another World title 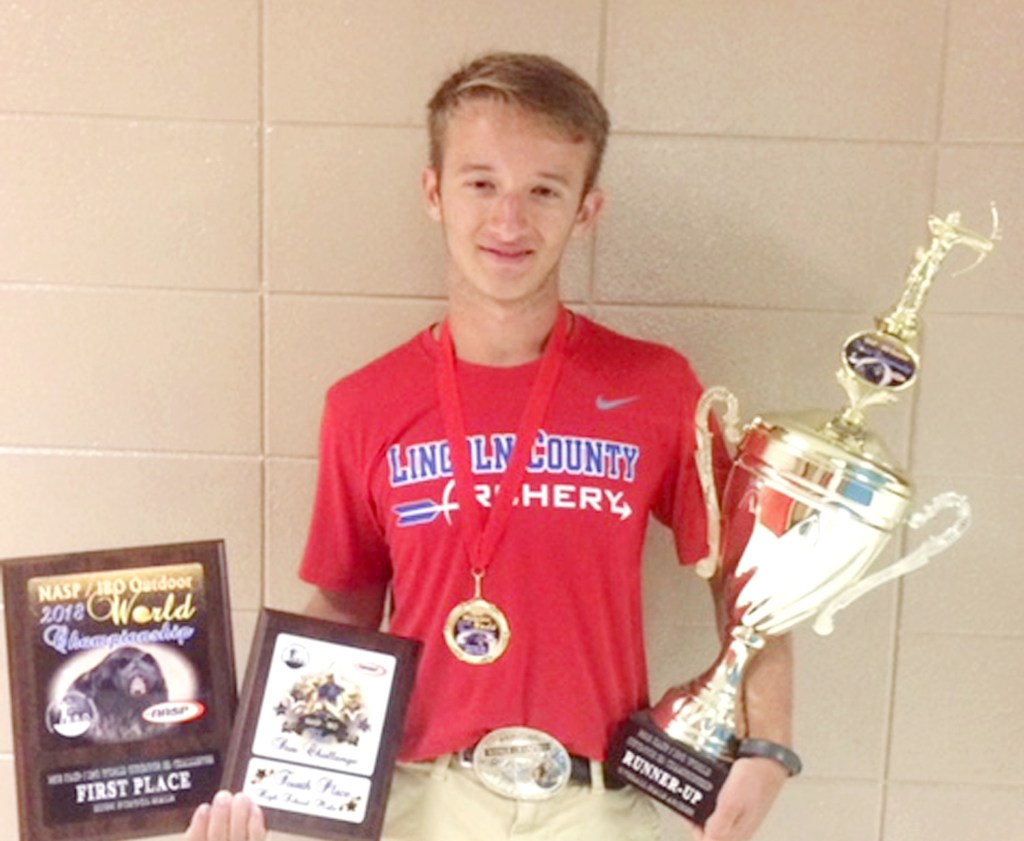 It has been said that the best just seem to have a way of rising to the occasion, no matter the pressure situation.

“This was my last tournament so I was like, ‘I want to go out with a bang. I want to take as much stuff home with me as I can,’” Mullins said.

Mullins not only finished first out of the three Lincoln County archers competing at the 2018 NASP International Bowhunting Organization (IBO) 3D Outdoor World Challenge this past week, he also claimed the World high school title after turning in a 3D score of 296 to capture his third World title – second in outdoor competition.

“I was proud,” Mullins said. “I was just happy I went out with a solid score and shot with a bunch of my friends. I had fun.”

As a two-time World champion coming into the tournament at Snowshoe, West Virginia, did Mullins feel any pressure to compete and repeat?

“Kentucky puts up a lot of heavy hitters in archery. I’ve shot with these guys for years. I know them all,” he said. “I really didn’t have much pressure because I knew them all. I knew how they shot. Of the top five males, four were from Kentucky. I knew T Sanchez, Joshua Smith and Jacob (Holtzclaw of Lincoln). I knew if I put up a good score it would be a close race. The only guy I didn’t know was the guy that finished in second place.”

“I wanted to do good here but it being a World tournament really didn’t matter to me,” Mullins said. “I had been there, done that. I did kind of think, ‘I already have two (titles), but three would be nice.’”

Easter Swain was the only female in the top five. The freshman from Meigs High School in Ohio placed fifth in the high school division with a score of 293. While Swain had the same score as Smith, he had 24 tens to her 23 to finish fourth.

Lincoln’s third archer in the tournament, Jacob Summers, finished in the top 15 among high school shooters. Summers, also a 2018 LCHS grad, shot a 282 to place 13th.

Mullins, Holtzclaw and Summers all three got their IBO Challenge rounds out of the way early in the tournament, lucking out by finding an open range.

“There was six sets of animals set up on each range, so close to 70 kids could have shot at one time,” said Mullins. “Thursday morning is when we shot and we came up on three people on a range. We said, ‘Hey can we just go ahead and shoot now since there is a chance of rain?” And they said, “Sure, hop up here. We don’t have enough people to fill.’”

Getting to shoot early left Mullins, Holtzclaw and Summers in a waiting game as they had to watch everyone else shoot.

“We were able to shoot before anyone else had, so I didn’t have any pressure on me. I knew I’d come in top if neither of the Jacobs did better than me, so I’m like, ‘I’m good,’” Mullins said. “I just set back and watched everybody and was sweating it out with my binoculars. I’m like, ‘Okay, that’s a 9. Oh, he’s cutting it close.’”

While shooting early worked out for Mullins and his teammates, he said it can have an opposite affect.

“It can have a negative affect,” he said. “You get in there early and you can psyche yourself out. You think, ‘I’ve got to do good so they’re all scared of my score.”

As Mullins begins his postsecondary career, can we expect some more archery titles in the future?

Well, at least for now.

“I’m going to Centre College, so my freshman year I’m not going to do sports. I’m just going to focus on my studies and everything and get my feet under me,” he said. “Then, maybe next year, my sophomore year, I’ll start an archery team there. To my knowledge, they have no club, no team, nothing. I’m going to have to be the pusher for it.”

“I’ve got a bow I can shoot collegiate with and I think his year I’m just going to set it out and practice with it a lot. I’m going to pick it up and start focusing with it and get my scores up so I can go out there and make a name for myself.”