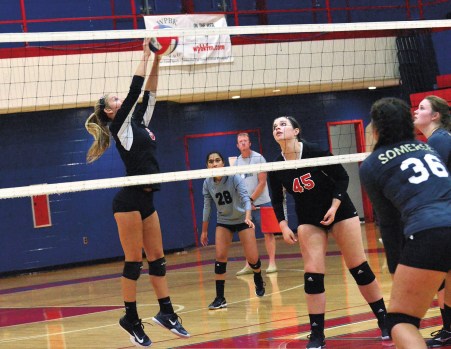 Photos by Nancy Leedy JASMINE WHITED of Lincoln County goes to the net for a return during the Lady Patriot volleyball team’s season-opening win over Somerset Monday. Whited had a game-high 14 assists, with six kills and one block in the 3-0 win. Keeping an eye on the action are Lady Pats Haley Bowen (28) and Kasie Mullins (45). 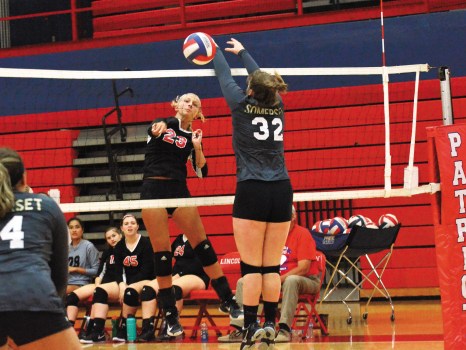 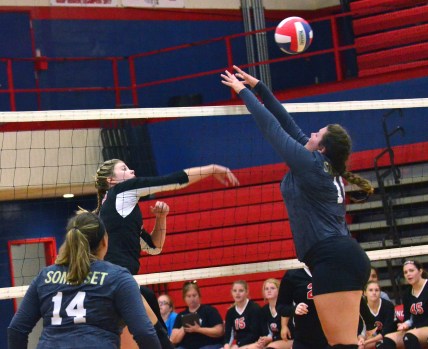 STANFORD — The Lincoln County Lady Patriot volleyball team kicked off the 2018 season just as it has the past two seasons – with a win.

“I thought we played pretty well. It was a good start,” Lincoln head coach Samantha Torres said. “I’m pretty proud of it. The second set was our toughest. We just didn’t communicate that well the second set, but we still pulled it out.”

Jasmine Whited put up 14 assists, had six kills and got one block in the win while Peyton Griffin had 11 assists along with four kills and three aces. Savanna Smith had four aces and one block and Taryn Johnson had six kills.

“Overall, it was really good,” Torres said. “We really only had that little miscommunication in the second set, but we played really good. Especially for just starting out.”

Torres could have very easily said starting out earlier than ever before. Lincoln and volleyball teams across the state had their preseason shortened, when the KHSAA announced that the state tournament would be played a week earlier due to the Breeder’s Cup, which is in Louisville, the site of the state volleyball tournament.

“We did not do a whole lot of extra practices because of the change in the schedule, but it didn’t seem to hurt us tonight,” Torres said. “What practices we did have, we split up a lot between, jv, freshman and varsity. I practiced five days a week, but they only practiced, like, three to four days a week.”