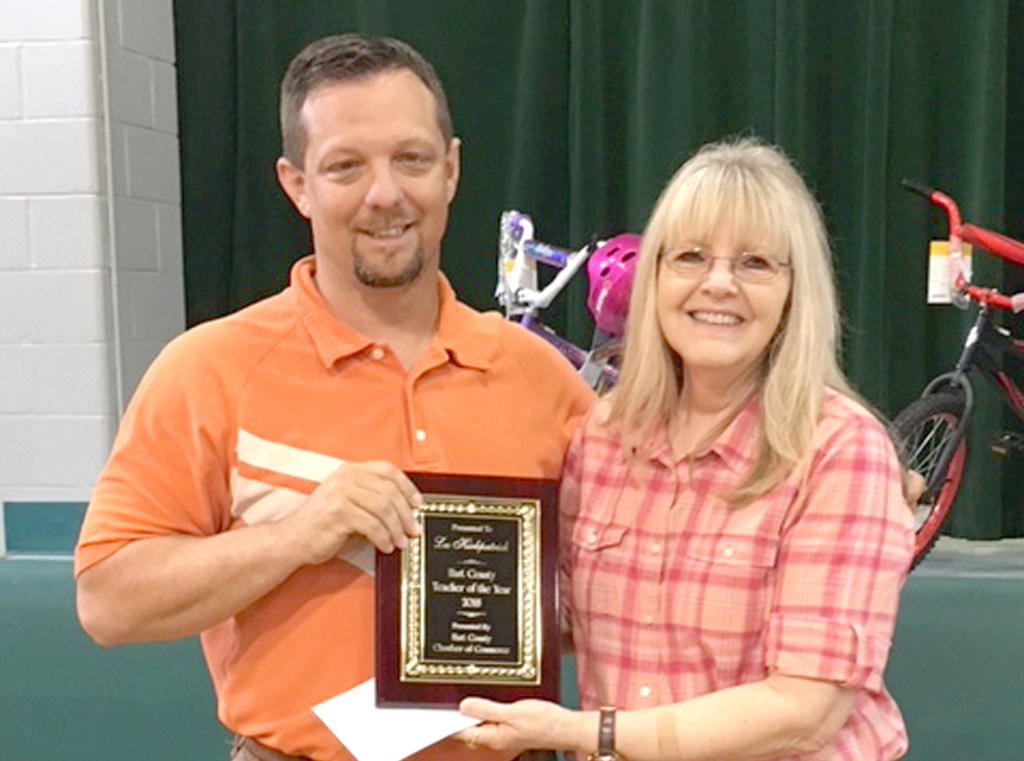 BONNIEVILLE – Les Kirkpatrick, physical education teacher at Bonnieville School in Hart County was recognized as Teacher of the Year by the Hart County Chamber of Commerce.

Kirkpatrick grew up in Lincoln County and is the son of Cheryl Gordon Bell of Science Hill and the late Mitchell Feistritzer Kirkpatrick of Hustonville.

In the nomination letter received by the Chamber, Kirkpatrick was praised for his commitment and dedication to his profession and the students he teaches. “Coach K is in constant motion and yet after a long day, he willingly gives of his personal time to work with students who need additional help.”

Other comments referenced his effective teaching style. “Before the snack machines were removed from the school, Coach K would take his classes to the area where they were located and explain about the nutritional value of each of the items and how much exercise it would take to work off that snack. He was ahead of his time in this area.”

Kirkpatrick also seeks out new opportunities for his students through grants and other resources that allow him to add new activities. “Kirkpatrick was the first to begin the Archery in the Schools program, with other schools soon following his lead. He also began a little league program through Upton Baptist Church to promote baseball fundamental skills with young players.” In his 20 years as a teacher, he has worn many hats – high school head baseball coach, football coach, basketball coach, volleyball coach, archery coach and FCA sponsor. As stated in the nomination letter, “I know of no other teacher that sees so many students so many times a week, touches so many lives, and instills a love of movement and healthy living. Young people often come back year later and thank him for his fairness and the life lessons that he taught them.”

Kirkpatrick was presented the award by Chamber Director Fran Bowsher of The Hart County News-Herald.