Crab Orchard residents will vote Nov. 6 on whether to allow alcohol sales in the city

Crab Orchard City Commissioners pose for a photo as they file a petition to put alcohol sales on the November ballot. From left to right are Commissioners Jerry Shelton and Juanita Pettit, City Clerk Nancy Baker, and Commissioners Chris Sandlin and Keith Saylor. 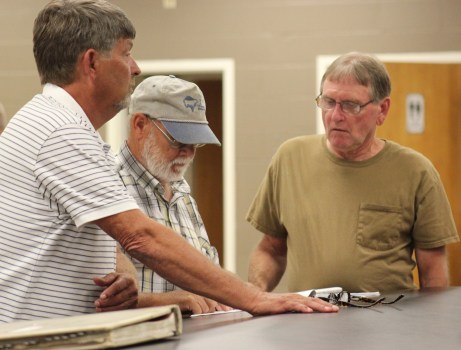 CRAB ORCHARD – With well over the required number of signatures, a petition to put alcohol sales on the November ballot in Crab Orchard has been certified.

Only 68 signatures were needed to file a petition but the committee of city commissioners gathered 125 signatures in support of putting alcohol sales to a vote and delivered it to the county clerk’s office on July 11.

The signatures were certified by Lincoln County Clerk Sonny Spoonamore last week, according to Crab Orchard City Clerk Nancy Baker, and delivered to Judge-Executive Jim Adams to issue an executive order to place the vote on the November ballot.

According to the paperwork, the oldest signature of support was from a 76-year-old and the youngest was an 18-year-old.

Shelton said while some declined to sign the petition, several told commissioners they would vote in favor of alcohol sales come November.

Under previous state law, Crab Orchard was unable to legalize alcohol sales due to its population size, but in 2016 a new law was passed that removed the minimum-population of 3,000 that was required.

According to City Attorney John Hackley, if voters decide to allow alcohol sales in Crab Orchard, the next step for the city will be to draft ordinances regarding the taxation and regulation of those sales.

“We can only have, based on population, one liquor store,” Hackley said. “It’s our belief that convenient stores can sell beer, but not distilled spirits.”

Store owners can also choose not to sell alcohol, he added.

If Crab Orchard voters turn down alcohol sales, a new petition to put it to vote cannot be filed for three years, Hackley said.

All city commissioners voted in favor of forming a committee and filing the petition earlier this summer, with Crab Orchard Mayor Billy Shelton casting the lone “no” vote.

The extra revenue will promote growth, commissioners said, and could help expand the police department. The city currently has one part-time police officer.

Commissioner Keith Saylor said drinking is more socially acceptable now than it has been in the past.

Now that the signatures have been gathered and certified, the committee’s main goal is to make sure voters show up Nov. 6, Saylor said.