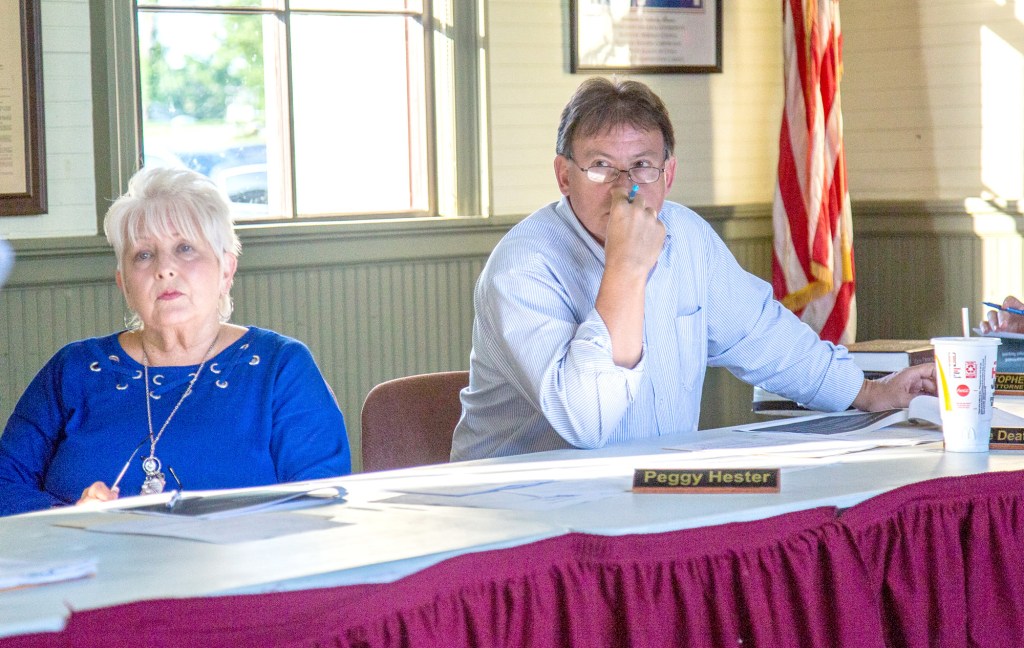 STANFORD – Last year, Stanford council members adopted a new approach to local code enforcement – one that they believed would end the public’s perception of uneven enforcement across the city.

But during the city’s July 5 meeting, council members once again found themselves discussing claims of favoritism when it comes to enforcing code violations on certain property owners in the city.

Planning and Zoning Chairman Ward Hart was asked by the council if anything was being done about violations occurring on property located behind Walmart in Stanford.

“About every meeting that we have, we do discuss whatever you want to call, not just in that particular case, a lot of the stuff we discuss is dilapidated houses…” Hart said.

Council member Peggy Hester said she was told two months ago that Planning and Zoning Attorney Kirk Correll was going to send a letter to the owner, Tommy Owens, about the violations.

“So many people that live out Hubble Road there are very stressed about the situation,” Hester said. “I hate to bring it up because I look like sour grapes but I am bringing it up; that needs to be addressed.”

Hester said she has received phone calls from upset residents living on Ridgeway Drive and out towards Hubble Road.

Hart said it’s not a matter of just sending a letter but admitted there are violations occurring on that property.

“We’ve got violations of ordinances of somebody that’s in city limits,” he said. “Some things are being done that are not allowed in that zone.”

The property located behind Walmart is zoned B-3, Hart said, which is highway business district.

Planning and Zoning Commissioner Jim Jarrett expanded on the reported violations during the council’s July 5 meeting.

“What he’s doing out there doesn’t fit into the B-3 (permitted uses),” Jarrett said.

Jarrett cited city ordinance 152.035 (a) which states that “hazardous waste storage, hazardous material production, incineration, landfills, storage and/or handling of any type of the aforementioned uses are expressly prohibited in all zones.”

“He (Owens) has a bunch of that,” Jarrett said.

Jarrett also cited ordinances 152.149 and 152.135 which relate to excavation and regrading within city limits.

“All of that dirt he has piled up there, all of the dump truck loads he’s dumped around the property line in behind Walmart is not permitted, according to the city ordinances,” Jarrett said. “What our ordinance says is if the code enforcement officer perceives a violation, he issues a citation. There’s no question about that. It’s not up to planning and zoning, it’s the code enforcement officer.”

So far, no citations have been issued for the property behind Walmart, he said.

“The mayor and Kirk Correll and I went out and looked at the problems out there,” Jarrett said. “The mayor was not real enthused about issuing the citation. We can’t go back to the way it used to be where we enforce some ordinances against some people and not other people.”

Jarrett defended Code Enforcement Officer Jeff Knouse, placing the majority of the lack of enforcement on the mayor.

“In defense of Jeff Knouse, it is very difficult to do your job if the person who can fire you has different ideas and directs you differently,” Jarrett said.

Knouse said he was under the impression that the planning and zoning attorney was sending Owens a letter about the property behind Walmart.

“He (Kirk Correll) told me he cannot write a letter until there was a citation issued,” Jarrett said.

City Attorney Chris Reed suggested looking at previous nonconforming use permits that might have been issued for the property behind Walmart prior to annexation.

Jarrett said during a recent planning and zoning meeting a motion was made to direct code enforcement to issue a citation for the property violations but Knouse said he was not at the meeting due to illness.

“I was off on sick leave with a doctor’s note and didn’t attend that meeting. When I came back I did ask Ward (Hart) what I missed and at that time Ward told me that Kirk (Correll) was going to be working on that and be getting with me,” Knouse said. “So I didn’t have any clue that I was directed by the zoning commission to start any activity out there.”

Hart said the confusion was just a misunderstanding.

“I’m defending Jeff (Knouse),” Jarrett said. “I think he’s doing a good job. But you can’t two or three or four other people telling you what not to do. What he needs to go by is the ordinance that was passed a year ago that says when you see a violation, you take care of it…”

Council member Naren James said enforcement has to be separated from the political body.

“He needs to put the citation in and then the owner can respond however he wants to respond,” James said. “He may cite certain things like the attorney is mentioning and then we can deal with that at that time. But until you have a citation, you have no action whatsoever.”

James asked Mayor Eddie Carter to respond to the favoritism that was implied.

“Jeff (Knouse) has got his plate full. He’s doing a great job. I’m not going to micromanage Jeff. He’s got a lot besides that to look at on a daily basis,” Carter said. “I support him 100 percent.”

Since House Bill 422 was adopted last year, Knouse said the mayor hasn’t interjected or instructed him to cite or not cite any properties.

“You can see in the first year I wrote over 400 violations. I still have complaints from last July that I haven’t gotten to yet,” he said. “…There are a lot of other issues besides Tommy (Owens) that need working on too, and I’m not taking up for Tommy. There’s some bad eye sores out there, there are some problems. But I’ve not taken the first call from that property as far as a complaint or anything like that but every time I go to Walmart…I see that and I know it’s there.”

City Council member Ronnie Deatherage said he also went to look at the property in question and to talk to Owens, along with a Lincoln County magistrate.

“We didn’t talk about the vehicles there, we talked about the dirt around Walmart,” Deatherage said. “He was telling us the reason why he put that dirt there and we’re in the process of working some stuff out and he was going to get back to us…”

James said it’s time for the city to talk about the elephant in the room.

“The truth is, I’ve lived in this city long enough to know that there’s a long history with Mr. Owens and his dealings with the city, which have been very costly to the city sometimes…,” he said. “I think the citation is a good place to start. Until a citation is issued he has no motivation to act and nothing is done.”

James said he appreciates what Owens does for the city as an owner of multiple properties but there are violations that need to be addressed.

“I would also be cautious of council members and members of the political class being engaged in negotiations,” he said.

Deatherage said they weren’t negotiating, they were just talking.

“As soon as boundaries become diffused people just go all over the place. It becomes dysfunctional,” James said. “We have to have a separation between political decisions made and enforcement by a separate body. That actually protects you.”

Carter said the city attorney will look into any possible permits that might have been issued prior to annexation before Knouse issues a citation.