Photo by Abigail Whitehouse Police seized over 170 grams of crystal methamphetamine during an eviction dispute in Stanford last week.

STANFORD – A civil dispute in Stanford led to the arrest of one woman after police allegedly seized more than 170 grams of crystal methamphetamine that she had taken with her after being evicted from a home in Stanford.

Jennifer Ann Brown, 36, was arrested by Stanford Police Investigator Ryan Kirkpatrick on July 5 at about 12:30 p.m. after police were called to 607 Miller Street for a civil issue, according to the arrest citation. Brown was charged with first-degree trafficking in a controlled substance (methamphetamine). 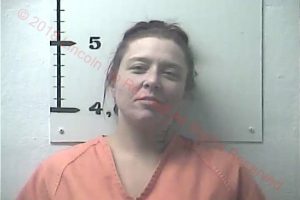 When police arrived at the residence on Miller Street, owned by Joe and Robin Crain, Brown had already left the scene, but she was later located on Whitley Avenue, according to the citation, and asked by police to return to 607 Miller Street.

“In the property on Whitley (Ave.) was a large amount of a clear crystal substance identified by Brown as methamphetamine,” the citation states. “Brown stated that when the property owners arrived at the residence (Miller Street) to serve an eviction, they told Brown ‘get out and take all your dope with you.'”

Kirkpatrick said Brown was located sitting outside on the sidewalk in front of a house on Whitley Avenue.

According to the citation, Brown allegedly told police that she “grabbed all the methamphetamine in the house that she knew about so that the owners would not find it because it belonged to their son.”

The methamphetamine, as well as a loaded Kel-Tec 9mm handgun, were left behind at the property on Whitley Avenue, Kirkpatrick said, after Brown left to return to 607 Miller Street as police requested.

Brown was taken for questioning and, based on information, police then obtained a search warrant for the Miller Street residence.

“We found a small amount of drugs in a high-tech device (used) for concealing drugs,” Kirkpatrick said.

Brown told police she did not sell drugs but “connected some people with the plug in Louisville,” according to the citation.

“Brown stated that she recently made a trip to Louisville to pick up methamphetamine and spent approximately $4,000,” the citation states.

Kirkpatrick said the current street price for crystal methamphetamine is about $30 per gram and heroin is about $200 per gram. In total, the drugs seized were worth about $5,400.

Police said the investigation is ongoing and more charges are expected to be filed.

Brown was lodged in the Lincoln County Regional Jail.  A cash bond of $15,000 has been set, according to the jail website.