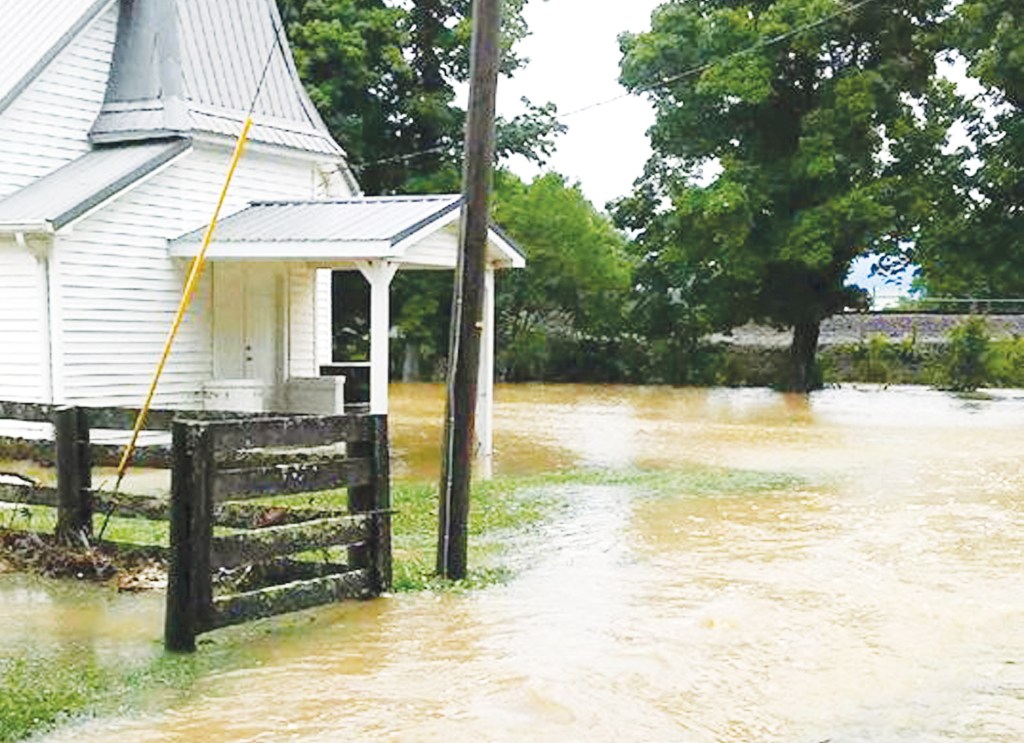 Photo by Robert B. McCormack FLOOD WATERS had started to recede at A.M.E. Church by Tuesday morning.

Story and photos by Robert B. McCormack
Contributing writer

Churches are not immune from the ravages of time and Mother Nature.

Last week on Monday and Tuesday, as the torrential rain fell, the shallow creek that borders the property of African Methodist Episcopal (A.M.E.) Church in Moreland could not be contained. The church was devastated by the flooding as the swell turned the yard into a lake.

The damage to the church, which has served the people of Black Pike, Moreland and Milledgeville since about 1892, was not discovered until Tuesday. The congregation of about 25 regular members were devastated when they saw the damage.

A complete inspection by many of the members revealed that the recently renovated restrooms, the dining hall, the recently purchased Yamaha Clavinova piano, the old acoustic piano, records dating back to the 1950s and pictures were heavily damaged. The carpet laid in the main aisle was saturated with water, mud and sediment and must be replaced.

That much water standing in the sanctuary for so long damaged the sub floor, joists and the finished floor. The 14 eight-foot long cushioned pews, purchased by the previous generation of church pillars and worshippers, were destroyed.

The devastation came just seven weeks before one of the biggest days on the church calendar — the annual Basket Meeting or homecoming. The members have celebrated the second Sunday in August as the Homecoming on the grounds as people who have relocated return home.

The Church advanced and modernized the notion of the feeding of the multitudes concept in picnic style as food was carried to the church in all things, baskets. The Basket Meeting is a day-long event as folks come from surrounding counties and enjoy preaching, praying, and tasty delicious food.

Fortunately, the church building is insured. But the insurance will not cover the extent of the damages. Much of the cost of repairs will be supplied by members and friends of the church. The church members opted to not lean on their own understanding but on the great creator and solicit your prayers as the church must deal with this setback.

Robert B. McCormack is a former sports editor and photographer for The Interior Journal, who worked for the paper in the 1980s. He is retired from the U.S. Air Force and a retired Jr. ROTC teacher in Florida.