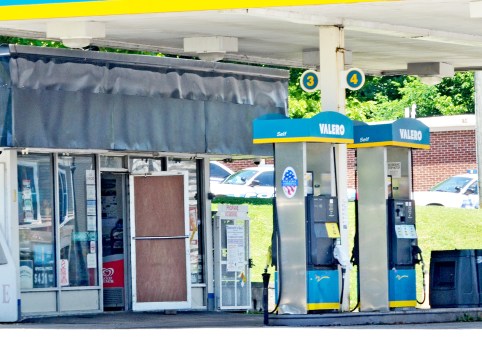 VALERO Gas Station across from the Stanford Police and Sheriff's Departments. A board replaces the glass which was shattered by a brick early Thursday morning. 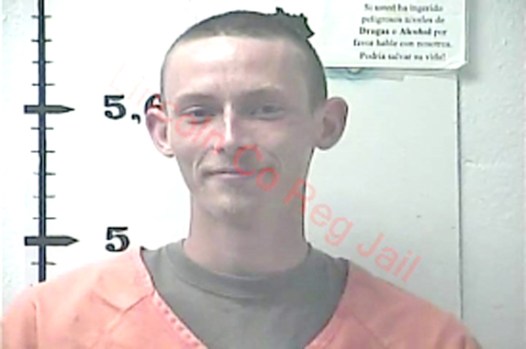 STANFORD — The Stanford Police Department asked the public for help in identifying the man who robbed a gas station Thursday, and they got a tip from an unexpected source – the suspect himself.
Harlan Madden, 20, of Stanford has been charged with third-degree burglary after police say he robbed the Valero Gas Station on East Main Street Thursday morning.
According to Stanford Officer Chase Marcum, Madden rode up on a 4-wheeler around 5:45 a.m. Thursday, threw a brick through the front door, grabbed $50 in change, two cartons of cigarettes, an empty gas can and a can of pop then fled, remaining at large until early Friday morning, when he turned himself in and confessed to the crime.
“He admitted to everything. He said he was on methamphetamines at the time,” Marcum said.
Marcum, the arresting officer, said social media and the news are often a big help in working cases and he said that was true in this case.
“We had no idea who he was,” said Marcum. “He had been taken to Lexington after the robbery and dropped off at a relative’s and, when the relative came home, they went inside. The relative turned on the TV and saw the surveillance video of the robbery on the news and said, ‘Oh, no! We’re taking you back to Lincoln County.’ I guess they were going to make him face the music. And he turned himself in.”
In a search of a property on Naylor Ridge after Madden’s arrest, police discovered some items taken in the robbery and the 4-wheeler he used and that’s when, according to Marcum, “all the pieces of the puzzle fit together.”
“He seemed like a good kid,” Marcum said of Madden. “He just got messed up. Started doing drugs. Drugs — they are the root of all evil.”
Coincidentally, the Valero Gas Station, which Madden confessed to robbing, is situated just a few feet away from both the Stanford Police Department and the Lincoln County Sheriff’s Office.
“I was in the PD at the time and Danny Gilliam was in the Sheriff’s Office,” Marcum said. “They have a really loud alarm, but it didn’t go off. Valero manager Gary Atkins said that it looked like the alarm was not fully set from the night before and that’s why it didn’t go off.”
Madden was lodged in the Lincoln County Regional Jail. His bond was set at $10,000 cash.