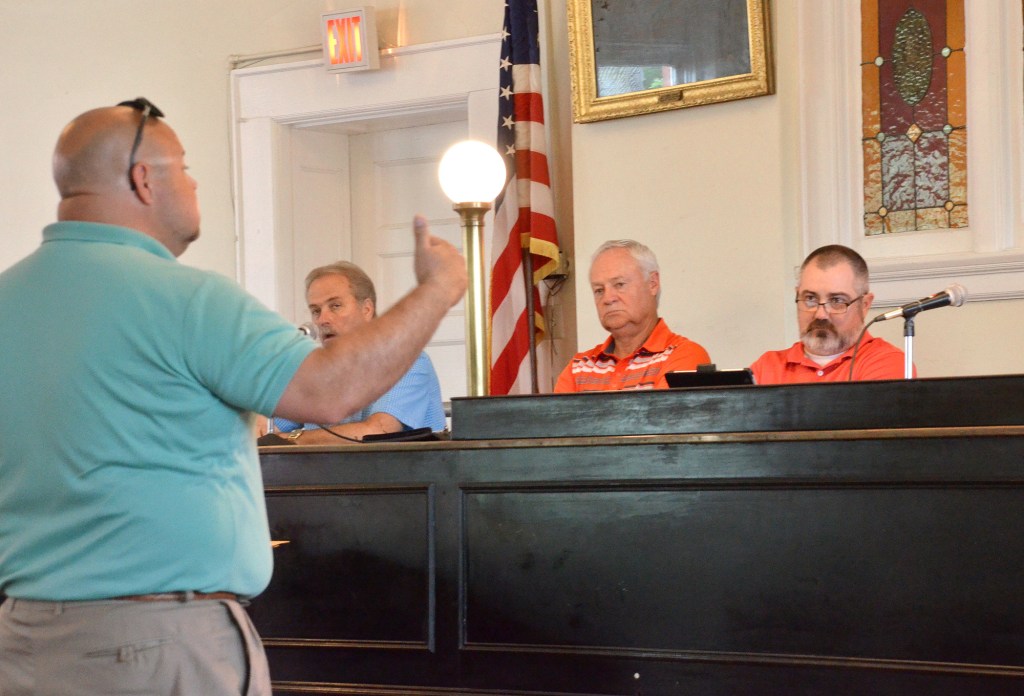 STANFORD — The Lincoln County Fiscal Court has taken the first step toward closing the north entrance to Ridgeway Road, off U.S. 27 in Stanford.
Julian Gander, a resident of Ridgeway Road, addressed the Fiscal Court during Tuesday’s public meeting, saying that the neighborhood road had become a hotbed for speeders and posed a safety risk.

Lincoln County Judge-Executive Jim Adams said he was aware of the cause for Gander’s concerns.

“They’ve had a problem on Ridgeway for some time. It’s called hot rods,” Adams said.

Gander nodded his head in agreement.

“People have a good speed going when they get to in front of my house,” he said. “They get a good speed going since they are coming from the road back near Tommy’s (Owens) business.” Owens’ business sits near the Ridgeway Road-Hubble Road intersection.”

There are three entrances to Ridgeway Road off of U.S. 27, probably all within a quarter mile of each other. Adams noted that all three entrances were in good shape and that the closing would still leave two entrances.

“Everybody that lives on that road pretty much uses the south entrance anyway,” said Gander. “Even Tommy Grimes (whose driveway is right at the north entrance) does. The only people that are really using it are trying to beat traffic.”

David Faulkner, as magistrate for District 1, has had many communications with Gander on the issue of speeders on Ridgeway Road.

“Julian and I have talked about this for years,” he said. “We’ve talked about putting in speed bumps. We’ve had terrible luck with speed bumps. You put them in and everyone complains about them, but they really do have a problem up there. I see no problem with closing the entrance. I think it would be a benefit to close it. I think it needs to be closed.”

County Attorney Daryl Day weighed in on the subject of closing the road and cautioned the Fiscal Court, saying, “It’s not just as simple as putting up a guard rail and closing the road.” He said they must go through proper closure procedures according to KRS 178.070 so that no one can come along who is inconvenienced by the closure and file a lawsuit to force reopening the road. Procedures include posting notices, a public hearing and viewing by two people with no vested interest in the closing.

In other new business, Mike Mullins of the Lincoln County Sheriff’s Office addressed the fiscal court seeking an authorized resolution so that he can apply for a relief grant from the Kentucky Office of Homeland Security. The grant money is made possible through the sale of confiscated weapons and the money is distributed to departments that can’t afford necessary equipment.

Mullins said the Lincoln Sheriff’s Department is putting in for nine patrol rifles with all the accessories needed, including training ammo and duty ammo, at a cost of $8,759.25.

Adams and the magistrates authorized the resolution for the project.

They also approved the addition of an Indigenous People Day to the Lincoln County calendar. The holiday, which was suggested to the fiscal court by Angela Arnett Garner, will coincide with Columbus Day.

After reviewing and approving payment of a few bills, the Fiscal Court also reviewed and approved the following payments:

• $2,500 to Donnie Gilliam as reimbursement for a side-by-side purchased for the Search & Rescue Team;

• $30,000 to be paid to the City of Hustonville for the West Side EMS contribution for a new building. The majority of the money comes from Bluegrass Area Development District funds.

“We had pledged this sometime back when they applied for the grant,” Adams said of the check. “I hope that they will accept it. The City Council in Hustonville has not been very cooperative lately, but I think that they will probably accept a $30,000 check.”