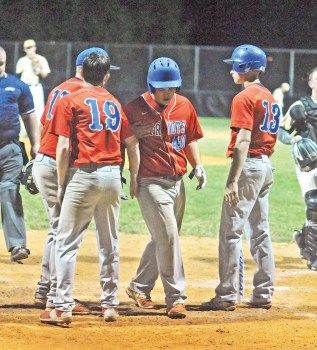 Photo by Matt Overing KYLE NEVELS is greeted by Lincoln County teammates at home plate following his fifth-inning home run in Monday’s loss to Boyle County. Bat Pat Alex Hutti also had a home run in the game, which was played at Garrard County Middle School. 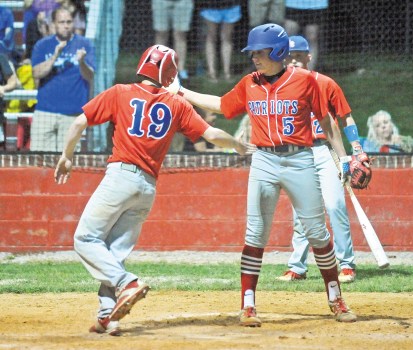 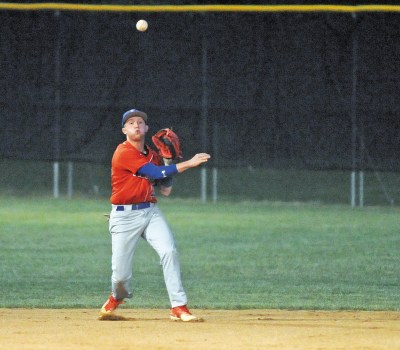 None had much success.

Boyle County dominated from the first inning against the Bat Patriots, winning 17-2 in five innings.

Six home runs were hit on a humid night in Lancaster: The Rebels went back-to-back-to-back in the first inning with solo homers by Ty Dragan, Alex Sergent and Tristan Helton to make the lead 3-0.

Dragan hit another solo home run for the Rebels, and Alex Hutti and Kyle Nevels each had a solo shot for the Bat Patriots.

But the Lincoln homers were too little, too late.

Boyle scored seven runs in the third and fourth innings, and although Hutti and Nevels hit their shots in the fourth and fifth innings, it didn’t stop the mercy rule.

Wyatt Hon got the start for Lincoln on the mound. He gave up three hits and three runs over one inning. He struck out one batter. Nevels, Shane Brown, Brady Martin and Jacob Baird came on in relief.

Blake Samons got the win for Boyle in five innings up. He allowed four hits and two runs with six strikeouts and one walk.

Lincoln and Boyle squared off last year in the 45th District and 12th Region championships, but the Bat Patriots haven’t had that same success this season after graduating seven seniors.

The Bat Patriots finish this season 3-27, without a win in 12th Region play.