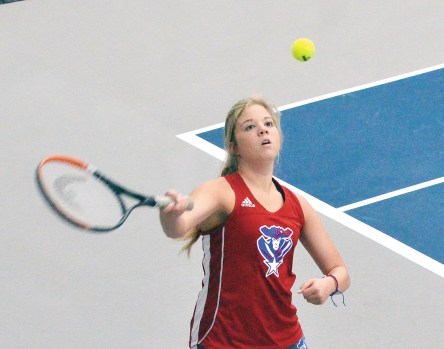 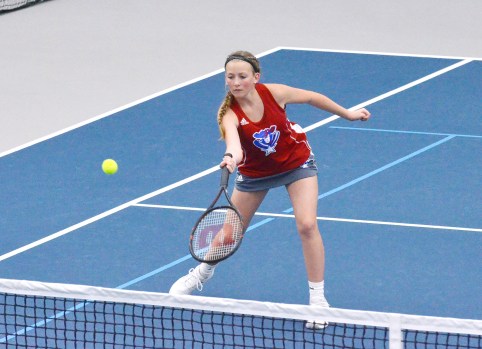 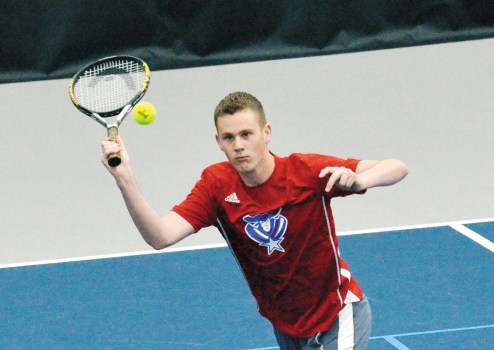 Photos by Nancy Leedy LINCOLN’S Kade Bandura returns a shot during second-round action in the 12th Region Tournament. Bandura and doubles partner Carter Story advanced to the quarterfinal round of competition before being eliminated. 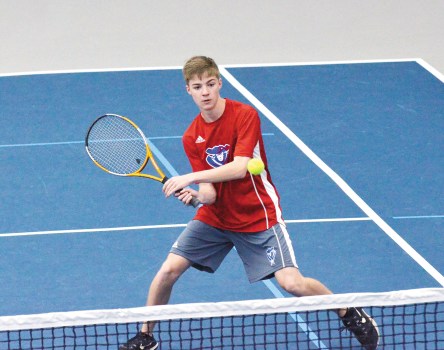 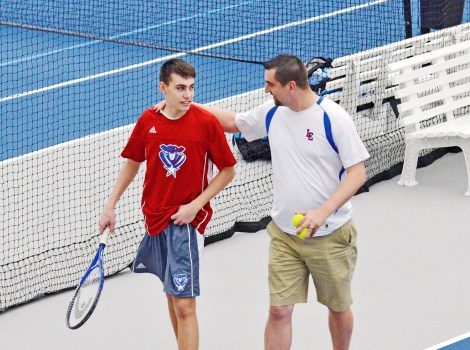 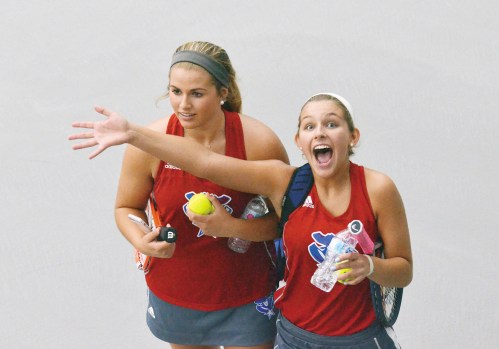 NICHOLASVILLE — While most Lincoln County High School students were focused on their studies or as they relaxed during the weekend, members of the Lady Patriot and Patriot tennis teams were turning in strong performances in tournament play.

Lincoln’s doubles teams of Savanna Smith/Alyea Towle and Kade Bandura/Carter Story, both seeded No. 8 in the girls’ and boys’ 12th Region Tournaments, led the way for the locals as both teams advanced to the quarterfinal round before making their exit. Smith and Towle started region action Friday morning at Top Seed in Nicholasville and Bandura and Story took the courts Saturday morning.

“The overall tournament went very well for us,” Lincoln coach Allen Lewis said. “We started off with the threat of more bad weather which forced us indoors, which I think was a good thing because we got to play in the amazing facilities at Top Seed. I think the players enjoyed getting to play on those courts. I also think the crowd, new courts, and just it being the region tournament in general, had the players a little nervous through the first round. That’s to be expected.”

The Smith/Towle and Amon/Wilks teams both posted first-round victories in the a.m. Friday morning, with Smith and Towle topping Kristen Lane and Sydney Arnold of Garrard County 6-4, 6-2 and Amon and Wilks winning 6-4, 3-6, in an 11-9 super tiebreaker over Rachel Carmack and Robin Carmack of Madison Southern.
Then, in the afternoon, Smith and Towle continued with their winning ways. The Lincoln duo defeated Molly Demrow and Mollie Harne of Casey County 6-2, 6-1 to earn a quarterfinal berth. However, Amon and Wilks’ regional run reached its end in the second round. The Lincoln team battled hard against four-seeded Abigail Crew and Rebekah Cochran of Casey County before being eliminated 4-6, 3-6.

Smith and Towle squared off against the tourney’s top seed in their quarterfinal match Sunday on the Boyle County High School courts, with Elsie Kibler and Ashley Graves of East Jessamine on the other side of the net. The Kibler/Graves team proved a little too strong for Smith and Towle to handle, though, as they bowed out of the tourney 2-6, 2-6.

“Smith/Towle played very hard and had a very good chance of winning,” Lewis said. “Multiple games went to duece and they had a lot of long points. We had too many unforced errors that we just couldn’t overcome. East had one player who was very dominant and great at the net. Our game plan was obviously to keep it away from her and we did that. We just made a lot of unforced errors in part because we were concentrating on hitting it away from her so much.”

The boys took to the Top Seed courts Saturday morning to begin their region competition. And, again, Lincoln started play with two wins. The Bandura/Story team notched the first “W” early in the morning, then, when they were already back on court for their second match, singles player Baylor Mattingly secured his own win.

Mattingly would fall in his second-round match, but Bandura and Story, like Smith and Towle, would go 2-0 the first day of the tourney to reach the quarterfinal round.

Mattingly won 4-6, 6-2, in a 10-5 super tiebreaker over Ryan Allen of Mercer County, but the first-year player could not pick up a second win as he was topped 6-2, 6-0 by fifth-seeded Stevie Morgeson of Garrard County in round two.

“Baylor Mattingly played an outstanding first round,” said Lewis. “He lost the first set and it’s easy to get down on yourself and think you can’t come back and win after losing the first set. But great job by him. He dug in and took control of the second set. He had the momentum and his opponent was very frustrated so I felt good going into the super tiebreaker. It was a great experience for him to get a region win as a freshman.”

Bandura and Story scored a dominating victory over Asher Fitch and Chase Bricken of West Jessamine in their first-round match Saturday morning, posting a 6-2, 6-1 win. The Lincoln duo emerged victorious as well in their second match of the day, downing Harrison Dalton and Nick Coleman of Southwestern 6-1, 6-4.

With the sun shining brightly Sunday, the boys’ tournament moved to the Centre College courts for the semifinals. Bandura and Story took the courts at 2 p.m. to continue play, this time facing off against Jackson Mesplay and Sam Clark of Boyle County, the tourney’s four seed. The Lincoln team got four games on Mesplay and Clark before falling 4-6 in the first set, but could only win one game in the second set as the Rebel team sealed the match win with a 6-1 second-set win.

“In the quarters we had teams playing at the same time at different locations, so Mr. Jim Baughman went to Centre College to coach the boys and I didn’t see the Bandura/Story match,” Lewis said. “But they clearly played a very close first set. They made a very good run through the tournament.”

“As a coach, you want your players to win the matches they should and to be in a position to win matches against higher seeds. We did that through the tournament in both boys and girls,” he said. “Amon/Wilks, Smith/Towle and Bandura/Story and Mattingly all advanced through the tournament before falling to a top 5 seed player or doubles team.”

Lincoln had 10 players taking the courts at Top Seed for the first round of tournament play, with Grace Muse and Emily Byrd representing the Lady Patriots and Gavin Fowler playing as the Patriots’ second singles player.

All three saw their run in the region reach its end in the first rounds Friday and Saturday at Top Seed. Muse fell 2-6, 4-6 to Natalie Hampton of Pulaski County, Byrd was defeated 1-6, 0-6 by the tourney’s top seed, Mia Kendrick of Boyle County, and Fowler fell 0-6, 0-6 to Chase Friday of Boyle County.

The performance of the Lady Patriot and Patriot tennis athletes at this year’s regionals has Lewis optimistic about the teams’ futures.

“The best thing about this tournament is that every player we had in it will be back next year,” said Lewis. “We will work this summer and hopefully carry this momentum into next year and make another run in the 12th Region Tournament.”