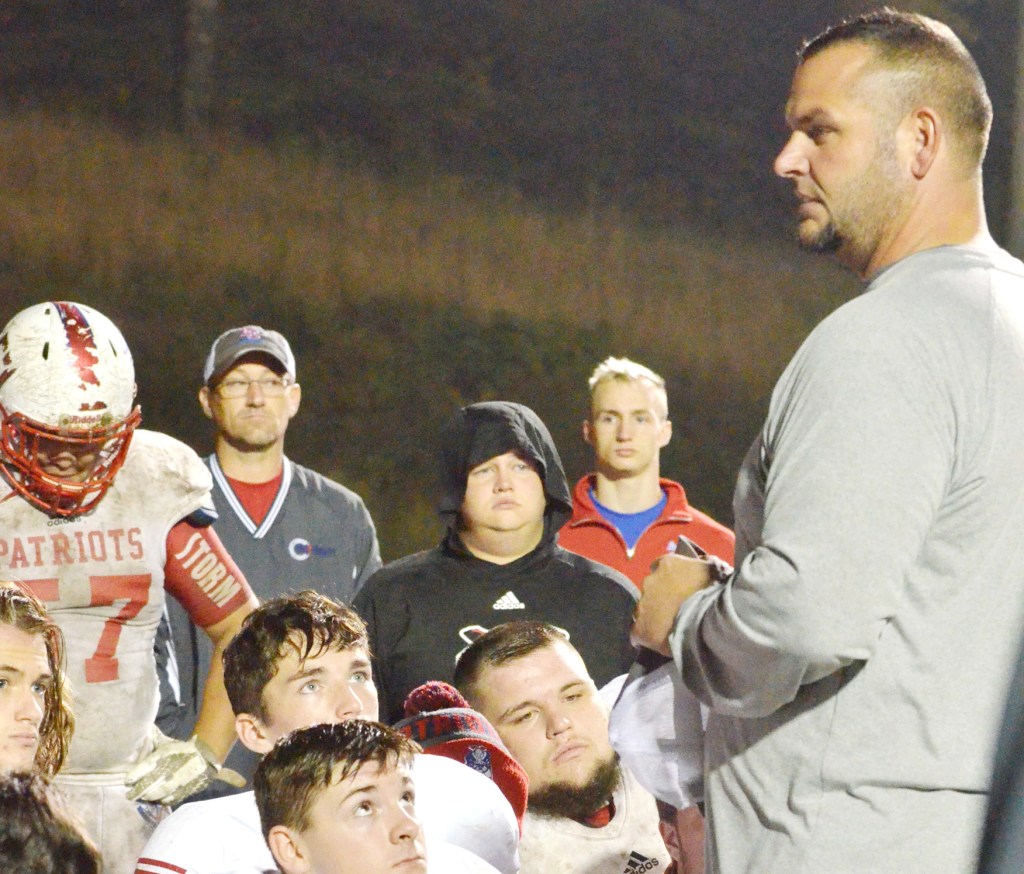 Photo by Nancy Leedy TRAVIS LEFFEW, right, huddles with his team on the field following Lincoln County’s first-round loss in the Class 5A state playoffs at North Laurel this past season. Leffew resigned as Lincoln coach and athletic director.

The Patriots went 10-34 during Leffew’s tenure as head coach. He took over the program in 2014.

Leffew, who served as a Lincoln assistant football coach for five years before taking the head job, is headed back home as he has accepted a position at Boyle County High School as teacher and assistant football coach. Leffew, who is also Lincoln’s athletic director, immediately resigned the coaching position but his resignation as athletic director does not become effective until June 30.

Leffew said making the decision to leave Lincoln did not come easy.

“It’s the hardest thing I’ve ever done talking to these kids and staff, but I just felt that God had led me in a direction that I’ve pretty much done everything I can here and that I needed to move on,” he said. “I didn’t think I’d be here for nine years, but just finished my ninth year here. Lincoln became home.”

Leffew, who played for Boyle before taking his talents to Louisville and the NFL, admitted he felt a tug in his heart after announcing his resignation to his players and staff Tuesday.

“I am pretty excited about going to Boyle, but, at the same time, it’s bittersweet because I’ve got to come in here every morning for the next 13 days and see these guys,” said Leffew. “These are my boys. I respect them and they respect me. Walking in this morning and putting their workout on the board and asking them to do the workout is tough when you’ve basically, in their eyes, quit on them, stepped out on them. But they ‘Yes, sir’d’ me and they got up and went to work. That shows the type of kids they are, the work ethic that have and great senior leadership.”

Despite his love for the Lincoln athletes, family and the opportunity to return home prompted Leffew to make the move to resign.

“A big thing is family,” he said. “My kids go to school and play sports in Boyle County and I’ve been missing seeing them play sports. Now, I’ll be able to see them play. And I get the opportunity to return to my roots and coach under the coach who coached me. I think that will be beneficial for my future as I have 19 years of teaching and coaching to go.”

Leffew’s 10-34 record over four seasons, including a 1-10 year, did not keep the Patriots out of the state playoffs as they played in the postseason the last three seasons. The most memorable playoff game was a 40-35 win over Harlan County in 2015.

“The reason for (record) is depth. We never had a lot of depth on the sidelines, no numbers. But they never quit. They kept playing,” Leffew said. “This staff and myself put our heart out every time for our kids. We love them. But it is what it is. Week in and week out the staff worked with these kids and the kids worked hard to put the best product on the field but, when you get in the third and fourth quarters and the kids are playing both ways and on special teams, it’s tough on them.”

As he moves on, Leffew says he wishes only the best for Lincoln football.

“We gave everything to Lincoln football these last four years, with the youth program and how we revamped it, to the middle school program to the high school program. I really think Lincoln is headed in the right direction and will be successful,” he said. “I’m just hoping that the person who comes in here will pick up on what we’ve laid out. Hopefully, Tra Carey’s signing (with Pikeville) and new blood in here will get more kids involved and get bigger numbers.”