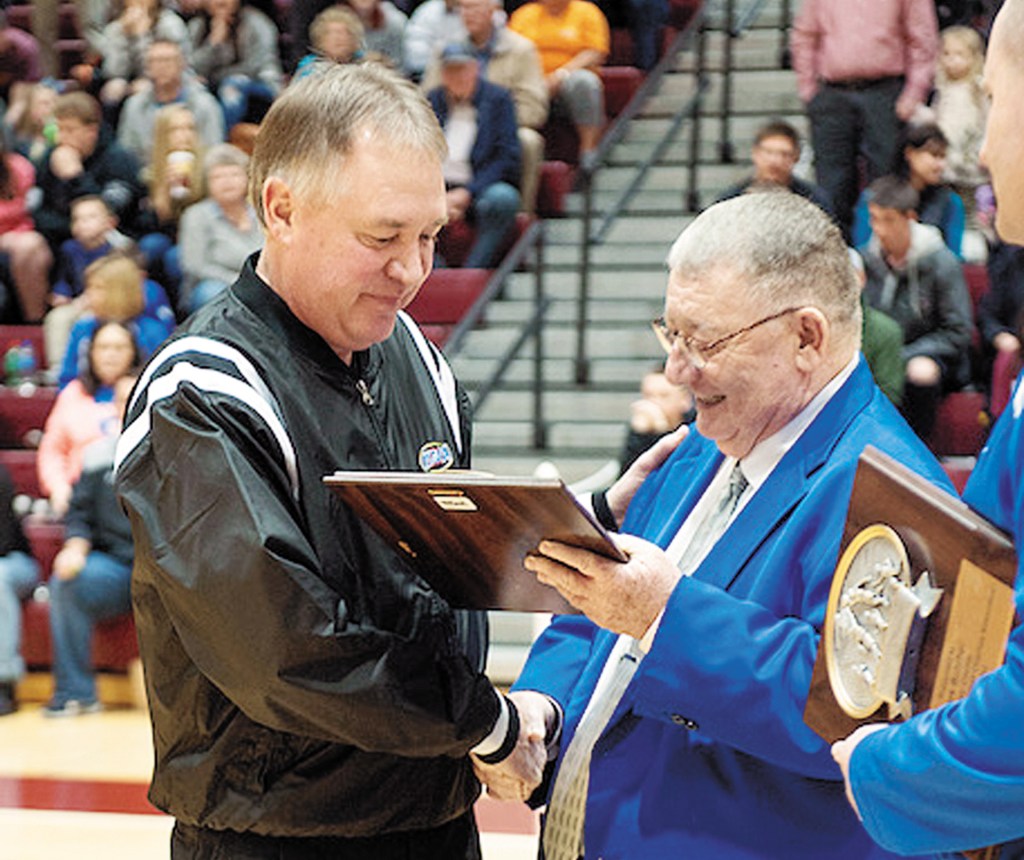 Photo by Wade Upchurch JEFF SINGLETON of Lincoln County accepts the plaque representing his induction into the 12th Region Basketball Hall of Fame from Roscoe Denney, left, during halftime of the boys’ region finals.

Jeff Singleton knew he would be in the spotlight during the finals of the Boys’ 12th Region Tournament championship game at Pulaski County on March 6. After all, the long-time official was part of the crew making the calls in the title tilt between Southwestern and Mercer County.

However, it wasn’t his officiating that put him the spotlight at center court. While the rest of the officiating crew retired to the locker room for halftime, Singleton remained on the hardwood to be introduced as a member of the newest Boys’ 12th Region Basketball Hall of Fame class.

Singleton,  a 1979 graduate of Lincoln County High School, was one of 12 people inducted into the 2018 Hall of Fame. This year’s class included 10 former players and two contributors.

“I am very grateful to be a part of (Hall of Fame),” said Singleton.

During his last two years at LCHS, Singleton had 626 points, 207 rebounds and 204 assists as the Patriots won back-to-back district championships. He was named all-district and all-region twice and was also named second team All-Central Kentucky Conference. Singleton made 41 of 48 free throws his junior year.

Singleton was the lone Lincoln Countian inducted this year. South Laurel had three named to the class, West Jessamine had two and Casey County, Monticello, East Jessamine, Pulaski County, Burgin and Wayne County each had one.

The newest class of the 12th Region Basketball Hall of Fame is: