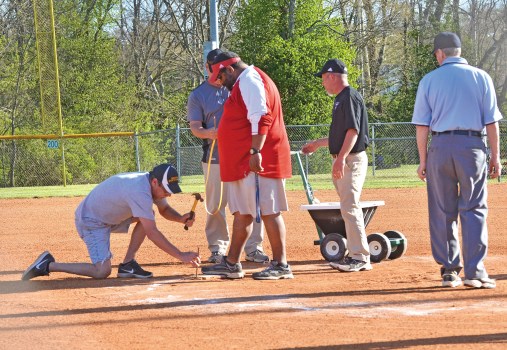 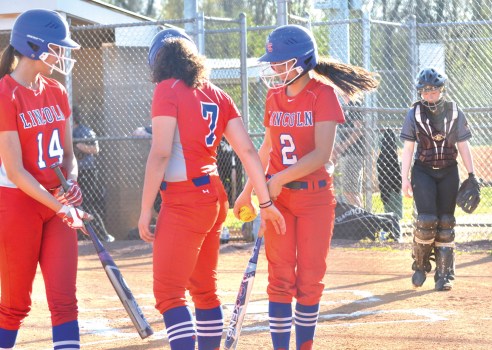 Photos by Nancy Leedy MADDY BOYLE, with her home-run ball in hand, collects her bat from Lincoln teammate Carmen Green after leading off the third inning with a solo shot in the 12-1 rout at Berea. 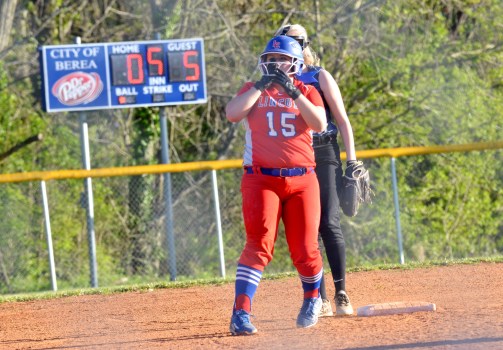 BEREA — Maddy Boyle smacked a solo home run over the left-field fence to lead off the third inning and spark the Lincoln County offense in a 12-1 rout of host Berea Monday at the Berea Sports & Recreation Park.

The game was locked in a scoreless tie when Boyle, Lincoln’s lead-off batter, connected for the solo shot off Berea starter Kendra Shearer. The third proved to be a long inning for Shearer as she faced all nine of the Lady Patriot batters before getting out of the inning as Lincoln exploded for five runs off five hits and one walk.

Berea (7-5) never threatened Lincoln’s lead, with the Lady Patriots (6-10) adding three more runs in both the fifth and seventh innings and one run in the sixth. The Lady Pirates were held scoreless until the bottom of the sixth.

According to Lady Pat coach Heather Hasty, explosive innings are not unheard of for Lincoln softball.

“We have a little tick in us where, as soon as something good starts going, we do,” she said. “As soon as that fire is lit, we’re pretty good about following it up and staying on it. Sometimes it’s just a matter of getting that fire started.”

While the scoring didn’t start until the third inning, the Lady Patriot offense really roughed up Shearer, getting multiple hits in every inning except the first at-bat amassing 19 hits for the game.

“Tonight, we had a really solid defense and offensive game. And that was awesome. That was awesome to see,” said Hasty. “Usually it’s one or the other. We’re really good in the field and struggling at hitting or we’re doing really good at hitting and we’re struggling in the field. But today we finally pulled all together and we had a real solid win. Hopefully we can keep it going.”

Trinity Shearer led the Lincoln battery with four hits, including two doubles. Carmen Green, Kallie Phillips and Heather Reardon all had three hits. Each of the three had a double apiece and Phillips also had a triple. Anna Lane had a double.

Shearer tagged her first double right after Boyle’s home run in the third, then Green doubled to left to send Shearer home. Green stole second and, after Madisen Hinkle got on with a walk, she came on around on a Lydia Rice ground out. Phillips connected for an RBI-single to score Hinkle and then completed her own trip around the bases on Lane’s double to make it a 5-0 ballgame.

Phillips, Reardon and Boyle scored a run apiece in the top of the fifth to extend the Lincoln lead to 8-0. The trio doubled to reach, with Phillips scoring on Reardon’s double, Reardon scoring on a ground out and Boyle coming home on an RBI-single by Shearer.

Hinkle, who had a hit and two walks in the game, led off the top of the sixth with her second walk and later scored on a Reardon single for a 9-1 lead.

Taelor Alexander got Berea on the scoreboard in the bottom of the sixth, scoring on a ground out. Alexander reached on a double, Berea’s lone extra-base hit of the game.

Lincoln added to its lead in the seventh. Shearer got a one-out double to get on base and Green followed her up off a single. Shearer scored on a Berea error and Green scored on Phillips’ triple. Rice, who reached on the error, also scored on the triple for the 12-1 final.