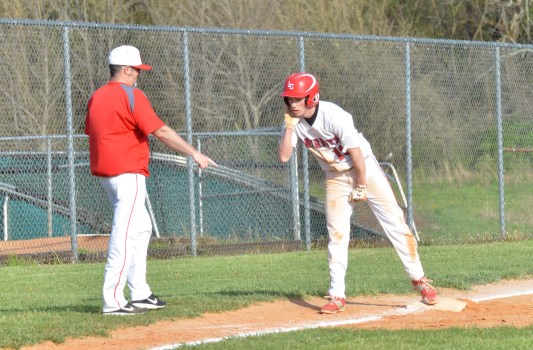 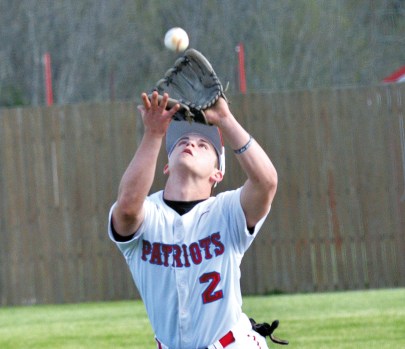 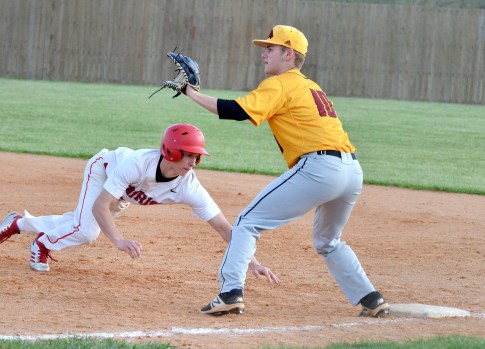 Photos by Nancy Leedy LINCOLN’S Garrett Clem gets back safely to first base before Garrard’s Collin Carver gets the throw from Ethan Lamb on the attempted throwout.

STANFORD — The Garrard County baseball team jumped out to a 7-1 lead after 5-1/2 innings Wednesday at Lincoln County, but the Lions had to hold off a late rally to earn an 8-6 win and sweep their back-to-back 45th District games with the Bat Patriots.

After scoring one run in their first at-bat, two runs in the second inning and exploding for five more in the top of the fifth, the Lions (7-4, 2-3) appeared tp have the game well under control before the Bat Patriots struck for five runs in the bottom of the sixth to make it a 7-6 ballgame.

However, Garrard closer Trevor Jones and the Lion defense slammed the door on the Lincoln hitters in the seventh inning, allowing just one runner on base, a walk, securing the win with a ground out, a force out and a pop fly.

“It was a nice rally. It was just a little short,” Lincoln coach Tee Ellis said  “I liked the fight in our guys. We didn’t give up, but we didn’t finish what we wanted. But it was an overall better effort tonight.”

Garrard starter Ethan Lamb saw his stint on the mound end in the sixth inning after giving up doubles to Lincoln’s Alex Hutti and Garrett Clem and a single to Seth Young. The three touched all bases to get the Bat Patriots within 7-4, with Hutti scoring on the Clem double, Young coming in on a Sawyer Carrier single and Clem crossing home plate on a Brady Martin single.

Carrier and Martin, who reached on singles off Garrard reliever Ashton Smith, scored a run apiece in the sixth to make it a 7-6 ballgame. Carrier scored on a Lions’ fielding error with Jacob Baird at the plate and Martin scored on a Devin Lawhorn sacrifice fly.

The Bat Patriots would get no closer. Johnathan Davis tacked on a run for the Lions in the top of the seventh before Garrard shut down Lincoln in the bottom of the inning to earn the sweep.

“It was a whole lot different game (than Tuesday),” Garrard coach CJ Lynn said. “We played six out of seven innings well tonight. We kind of lapsed there in the sixth inning, kind of lulled and made some mistakes that they capitalized on. Kudos for them for capitalizing on our mistakes. That’s what you’ve got to do as a baseball team. The other team makes mistakes, you take advantage of it. And they did that.”

“I’m proud of our guys for taking and bowing up there and stopping the bleeding when they did, then coming in and scoring another run there in the top of the seventh for kind of a little cushion. That always makes you feel good when you can get a cushion.”

Garrard struck for the game’s first run in its first at-bat. Lincoln starter Brady Martin hit Garrard lead-off Trevor Jones with a pitch then Jones, who scored the Lions’ first run the previous game, moved around to third on a ground out and later scored on a sacrifice out by Anthony Justus.

Isaac Lyons and Connor Isaacs tacked on a run apiece  in the second inning to make it a 3-0 ballgame. Lyons, who walked on, and Isaacs, who reached on an error, both scored on a single to left field by Lamb.

Lincoln (2-11, 0-4) knocked the goose egg off its side of the scoreboard in the bottom of the fourth, with Hutti, who led off the inning with a single, coming home on a Clem RBI-single. Hutti stole second and moved to third on a Young ground out before scoring.

It was in the top of the fifth when the Lions really distanced themselves from the Bat Patriots, as the offense ripped off four more runs to extend their lead to 7-1. Jones, Hudson Cornett, the courtesy runner for Tanner McGuffey, Justus, and Collin Carver scored a run apiece in the inning. Garrard actually had five runners to touch home plate in the inning, but Ashton Smith was called out for leaving third base too early.

Carver, who took base on a walk in the fifth, was the last batter Martin faced, with Wyatt Hon coming on in relief. Martin gave up seven runs off five hits with three walks. Hon gave up one run off six hits. He had one strikeout.

Garrard’s Lamb gave up four runs off four hits, with one strikeout. Smith allowed two runs off two hits with one walk and one strikeout in his time up while Jones gave up one walk.

Garrard got 11 hits off Martin and Hon, with Jones, McGuffey, Brady Davis and Lamb each getting two hits.

Lincoln finished with six hits. Hutti had two of the six hits.

“We still made too many errors,” Ellis said. “We’ve got to make routine plays or we’re not going to win. And our guys didn’t hit until the sixth inning. It’s hard to win when you don’t do those two things in combination.”