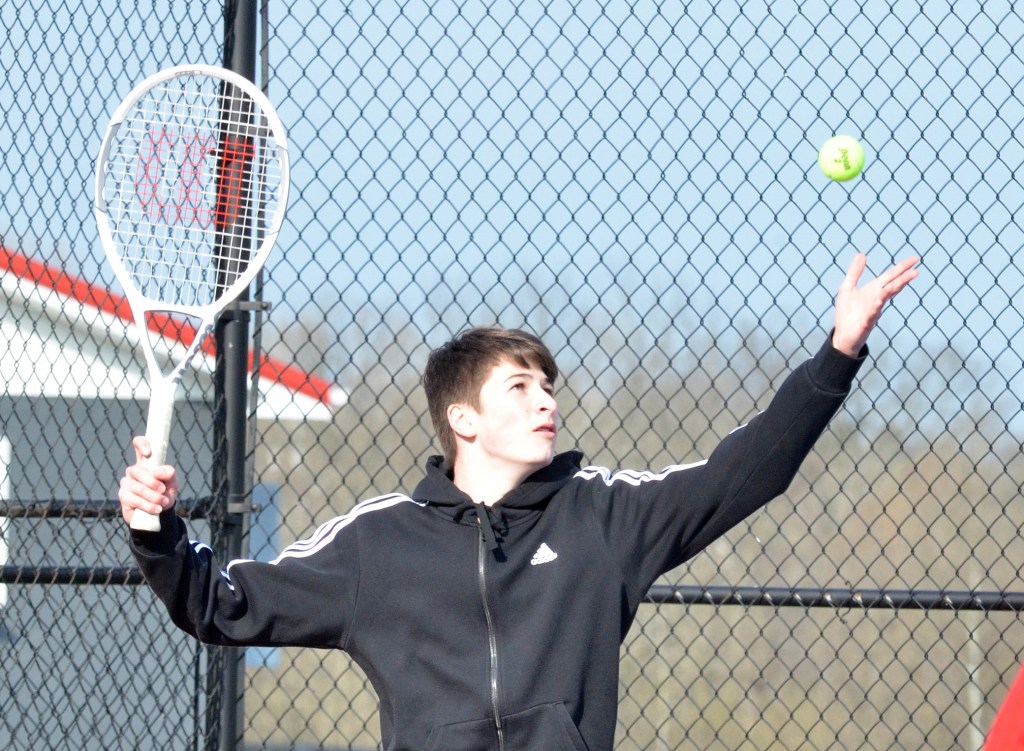 Photo by Nancy Leedy LINCOLN COUNTY’S Colin Green earned two wins at Danville, one by forfeit and one in doubles action, as the Patriots defeated their hosts 6-3.

The Lincoln County High School boys’ and girls’ tennis teams split their match at Danville, with the Patriots bringing home a 6-3 victory, while the Lady Patriots fell 5-0.

Carter Story was on the winning side of a hard-fought battle with Danville’s Saif Siddiqui in the road match. The Lincoln junior defeated Danville’s top-seeded player 7-6 in a 7-2 tiebreaker. Story would not get out of the match unscathed, though, as he and doubles partner Kade Bandura were topped by Siddiqui and Seth Brunner 6-4 in first doubles.

The Patriots would win four of the next five singles matches, with Bandura, Lee Amon, Colin Green and Caydunn Randall all getting “W’s.” Bandura earned his win at the two seed, defeating Eli Gooch 6-3. Amon and Randall both emerged as 6-1 victors, with Amon beating Tyler McGirr at four and Randall topping Jesus Ayala at six. Green’s win was a 6-0 forfeit over Brunner.

Baylor Mattingly challenged at the fifth seed in boys’ singles, but it was Danville’s Jesus Gonzalo claiming the win 6-4.

Lincoln finished 2-1 in doubles’ play, with the doubles teams of Amon/Green and Gavin Fowler/William Hawkins securing the match win with back-to-back victories at the two and three seeds in doubles. Amon and Green won 6-1 at two, defeating Danville’s Gooch and McGirr while Fowler and Hawkins blanked Gonzalo and Ayala 6-0.

All of the Lady Patriots won at least one game against the Lady Admirals, but none could collect a match win.