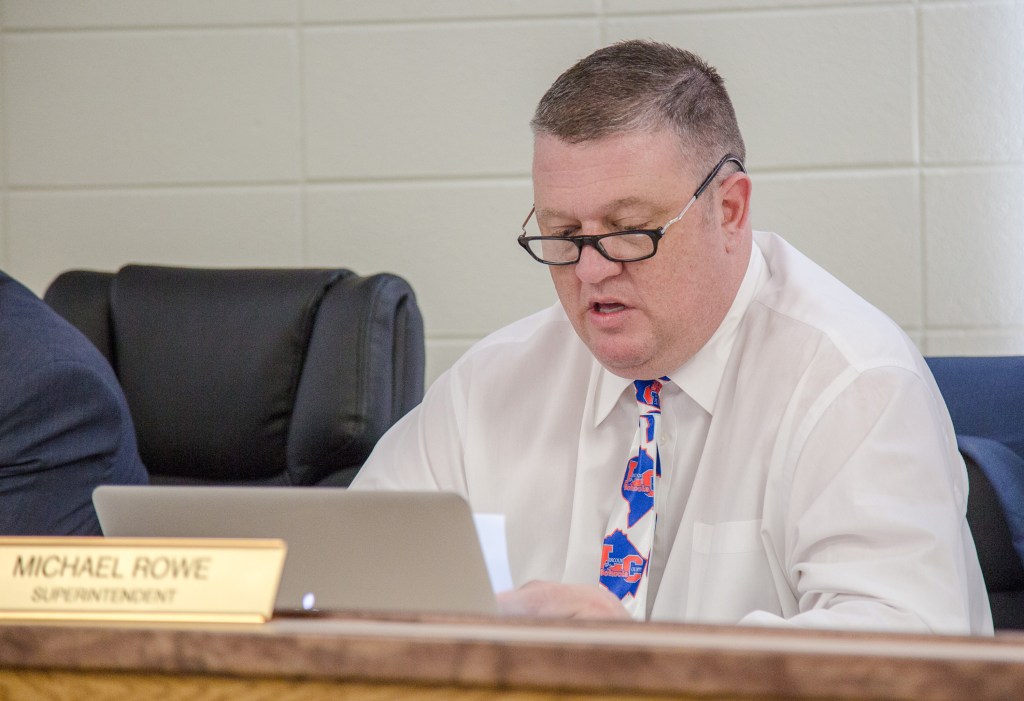 By Ben Kleppinger and Abigail Whitehouse

Lincoln County School District has restored funding for all of the teacher positions it had planned to eliminate in February. The Board of Education voted unanimously last Thursday night to make seven other cuts and changes totaling almost $450,000 in savings in order to save 11 teaching positions and 12 classified staff positions.

• elimination of the transportation data specialist secretary position, a job created in the wake of a fatal 2014 wreck involving a school bus — savings of $11,174;

• cut half of a full-time position allocated for a counselor  at Fort Logan School and cover those job duties with existing central office staff — savings of $29,949;

• use Exceptional Child Program funds to pay for part of a school bus being purchased by the district (requires approval from the Kentucky Department of Education) — savings of $62,764;

• cut .2 of a full-time position allocated for an English language learners district teacher — savings of $12,484;

“If that is approved, again, the next two items on the agenda are to give our (teacher) positions back to our schools,” Rowe said.

Preliminary versions of Rowe’s recommended changes included the possible elimination of a bus mechanic position and a reduction to the out-of-school instructor position that meets with children who are homebound. Members of the public commented on those proposals at the beginning of Thursday’s Board of Education meeting, asking the board to reconsider eliminating the positions. But those positions were both ultimately preserved in the final recommendation Rowe gave to the board.

Rowe elaborated on the elimination of the data specialist for the transportation garage Wednesday this week, saying all positions in Lincoln County Schools are important but reduced state funding, along with decreasing student enrollment has placed the district in the position to cut staff.

“The transportation department will develop procedures to ensure the required data is stored and collected per KDE (Kentucky Department of Education) policy,” he said.

Risden-Smith said through the district’s partnership with the Healthy Kids Clinic, increased Medicaid billing, which the local health department previously took care of, resulted in the revenue needed to cover the cost of the social service worker positions that were previously added.

After the board voted unanimously to accept the recommended cuts and changes Thursday, it proceeded to change the teacher-to-student ratio for fourth through 12th grades back to 25-to-1, where it is this year. In February, the board had tentatively raised the ratio to 28-to-1 in anticipation of deep funding cuts from the state.

The board then also voted unanimously to restore funding it had cut in February for “Section 7” positions, including instructional assistants. The restoration of Section 7 funding included a minor upgrade to provide school technology coordinators at the middle school and high school. District Finance Officer Marsha Abel said the elementary schools already all have such a position, and upgrading positions at the middle and high school will only cost about $500 annually.

Rowe said Wednesday that the cuts made were ones that least impacted the classroom.

“The district will offer the same services with less staff,” he said.

School year extended to May 29

Lincoln County students will be in school until the Tuesday after Memorial Day. The Board of Education extended the school year on Thursday, as many teachers prepared to travel to Frankfort for protests at the Capitol the next day.

The school district announced last Wednesday it would close on Friday because of how many teachers were taking off for the protests.

Lincoln County High School graduation will still take place on Friday, May 25 — the board voted to waive a normal requirement that graduation occur after the final day of classes. But students will have to return after the three-day holiday weekend for one more day at school. The final day for teachers is now Wednesday, May 30.