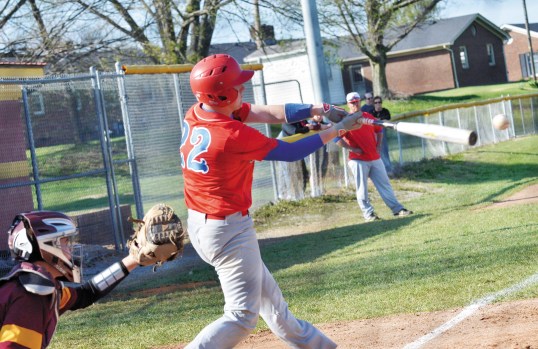 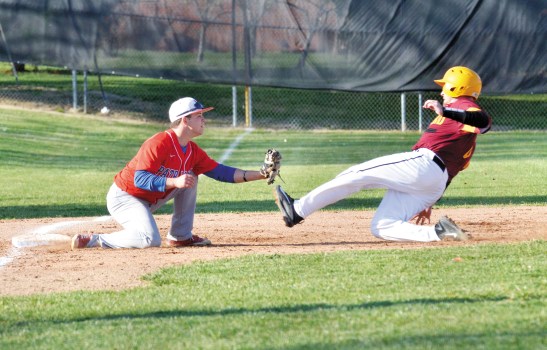 Photos by Nancy Leedy LINCOLN third baseman Jacob Baird is ready for the tag on Garrard’s Mason Bowman, which ended a 5-0 first-inning effort by the host Lions in their 12-2 win over the Bat Patriots.

LANCASTER — Both the Lincoln County and Garrard County baseball teams were looking for their first 45th District win when they met on the diamond Tuesday at Garrard County Middle.

Garrard came away with the “W” in a big way, as the visiting Bat Patriots were defenseless in a 12-2 drubbing.

Garrard, which improves to 6-4 overall, 1-2 in the district, scored its 12 runs off 10 hits, but the key statistic that led to the lopsided win, was the seven unearned runs scored off 10 Lincoln errors.

Lincoln (2-10, 0-3) had only two runners to reach third base in the ballgame, and those runners did not reach until the top of the fourth when the Bat Patriots finally scored.

Seth Young, one of five Bat Pats getting a hit in the game, led off the fourth with a single and moved around to second on a Garrett Clem hit. Both runners advanced on a wild pitch then, after back-to-back strikeouts, Devin Lawhorn connected for an RBI-single to right field to bring both home for Lincoln’s only runs of the game.

The Lions scored all the runs they needed for the win in their first at-bat, recording five runs in the bottom of the first inning, four unearned. Trevor Jones, one of two Lions collecting two hits, led off the first with a solo home run. Tanner McGuffey reached on a single and Ashton Smith was walked on by Lincoln starter Sawyer Carrier, then both runners scored on an error with Carver at the plate. Carver moved to second on a throwing error and advanced to third on a fielder’s choice before scoring on another error, the third of 10 by the Lincoln defense, to make it 4-0. Connor Isaacs, who reached on the fielder’s choice, made it 5-0 when he scored on another error.

Carver and Isaacs both had a double for their hits in the game. Lamb and Jones each had two hits for the Lions.

Sawyer Carrier went 2-2/3 innings for Lincoln, allowing 10 runs off nine hits with one walk and three strikeouts. Hutti came on in the third and gave up two runs off one hit and one walk. He had two strikeouts.