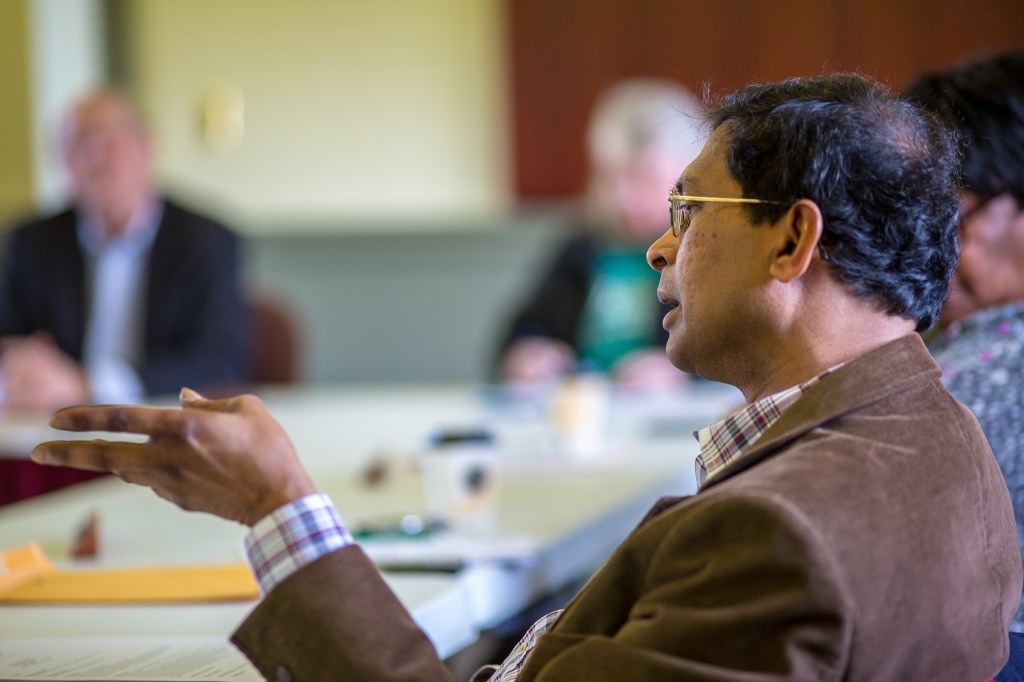 Stanford City Council member Naren James said he doesn't want to "gerrymander" the city limits and would prefer to keep the city "as contiguous as possible." (Photo by Ben Kleppinger)

Stanford City Council voted 4-2 Thursday to proceed with surveying for an annexation on the south end of the city.

Before the council voted to proceed, Stanford Mayor Eddie Carter asked if council members would consider removing the Lincoln County Road Department garage from the annexation. Carter said he had spoken with the workers at the garage who would begin paying payroll taxes to Stanford after the annexation and they were against the move. 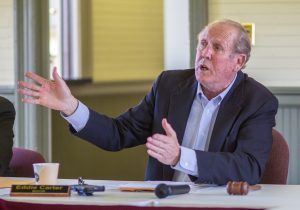 “I want to keep a good relationship with (the county),” Carter said. “They come in, we’ve got a tree down and they get it up and they’ve got a grinder to grind it up. And they clean the creek out. They do a lot of things for us. I don’t know — the more we’re going to take, I don’t know that we — you know, is it worth it to take it in? I don’t know. We’ll discuss it here tonight.”

Stanford Fire Chief Scott Maples said the city anticipates getting $400 annually in payroll taxes by adding the county garage to the city limits.

Council member Naren James asked what the expense side looks like; Maples said there is essentially no expense as far as any road maintenance or electric bills for street lights.

Carter questioned if the county asked for street lights at the garage; Maples said it might cost about $20 a month for the electric bill.

Carter said the city would also have to provide fire and police services for the garage.

“I know a lot of the people out there. I can see it both ways folks,” he said. “I want to keep a good relationship with the judge(-executive) and all the workers out there.”

James said he would like to keep the city “as contiguous as possible” and avoid “gerrymandering” the shape of the city by excluding one property and not others. James added he spoke to Judge-Executive Jim Adams and he didn’t believe the annexation would be a problem.

Council member Peggy Hester said she would have a hard time justifying exempting the county garage while the city requires other businesses in the area to become part of the city.

“How can we justify making someone else a part of it if they don’t want to be?” she asked.

Long-time council member Scottie Ernst said a similar situation arose years ago when Stanford annexed the Lincoln County school campus in the same area, bringing a lot of teacher jobs into city limits and generating payroll taxes for the city.

“Those teachers raised all kinds of cane because they didn’t want to pay the tax,” Ernst said. “… I’m sorry, but if we’re going to have Ready Mix annexed in, I’m sure those employees don’t want to be paying the tax either. That’s just across the fence. So I say leave it in.”

Council members asked whether the annexation would be a positive for the city.

“It’s a win-win for both,” Maples said. “They (the property owners) are saving a lot on their insurance rates; we’re gaining money.”

The insurance savings for the property owners would be thanks to Stanford’s higher ISO rating — the city has a 3 and the county has a 5, which translates into higher insurance premiums in the county, Maples explained.

Hester eventually asked Carter if he was saying that annexing the county garage would harm the city’s relationship with the county employees who work there and sometimes do cleanup work that benefits the city.

Carter said he doesn’t think it would harm the relationship.

James made a motion to proceed with the annexation plan without any changes to the property list; Ernst seconded the motion.

Carter asked for a roll call vote, meaning each council member would vote yes or no individually. Council member Ronnie Deatherage’s name was called first, but he wasn’t immediately able to decide which way to vote.

Sallee voted against the motion; James, Hester, Sarah Givens and Ernst all voted in favor. Deatherage paused again when it was his turn, before ultimately voting no, making the final vote 4-2 in favor.

Maples said surveying of the land will be completed in time for the council to approve annexation at its May meeting.

Stanford is also looking into annexation of the Goshen Cut Off area north of city limits.

Maples told city council members Thursday the Bluegrass Area Development District is currently completing an analysis of benefits to residents if they chose to be annexed.

“That will be done by the next council meeting and all the information will be shared — pros and cons and all that,” Maples said.

Jim Jarrett, a member of the local Planning and Zoning Commission, questioned why the city is annexing land to the south that doesn’t seem as natural a fit as neighborhoods such as Goshen Cut Off, Morgan Manner and Dix River.

“I think we should try to concentrate on areas around Stanford instead of going south,” he said.

Carter noted the city attempted to annex the Dix River subdivision years ago and it fell apart — the mayor at the time took heavy political damage for the move.

“That was done wrong back then,” Maples said. “The citizens weren’t educated back then on the savings.”

“I agree with Jim — I think we need to get out there eventually,” James said. “… I think we’re doing it the right way; we’ll get there eventually. But I do believe when we get to Dix River, we’re really going to have to handle that a lot more gingerly because of the past.”

“The annexations we have done here in just the past five years — Walmart and the schools — if those hadn’t been done, the city today would be broke,” Maples said.

James said he believes frequent, positive news coming out of the city’s police and fire departments has made people more open to the idea of being annexed into the city limits. Maples agreed.

“These people in these areas see this and they want to be a part of it,” he said. “Plus save money.”