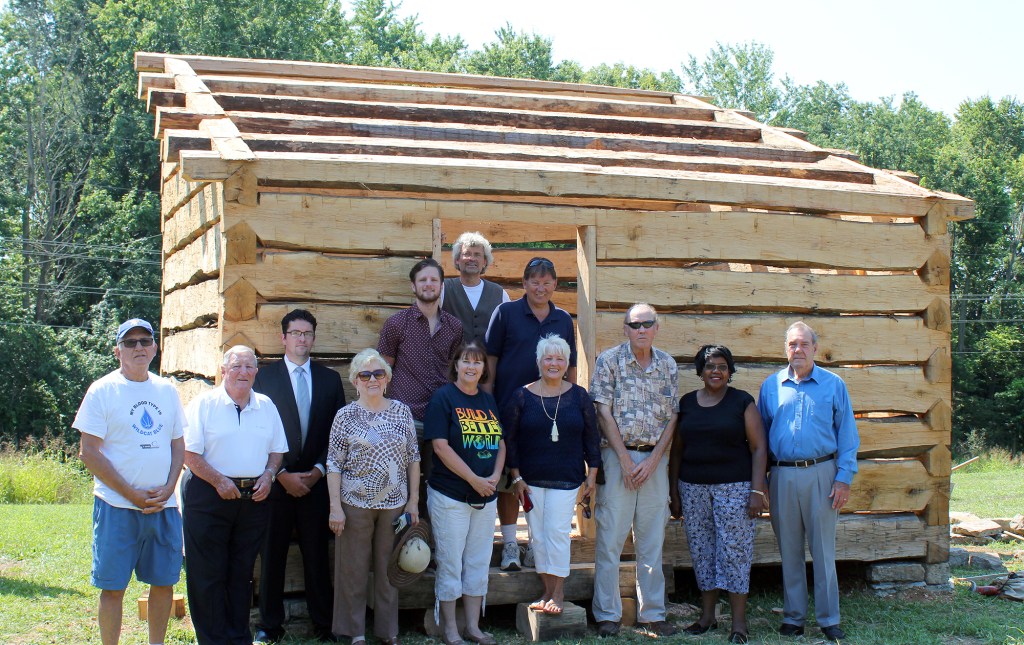 Members of the Logan's Fort Foundation and Stanford City Council stand in front of a cabin completed in 2017. (File photo by Abigail Whitehouse)

Stanford City Council has approved a contract extension that will allow the Logan’s Fort Foundation to build a fourth cabin as part of the reconstruction of the original 18th-century fort. The council is also requiring quarterly financial reports from the foundation prior to future construction approvals.

Garlan Vanhook, architect for the fort reconstruction project, told city council members the man building the cabins, Roland Cadle, has to complete each cabin before the bond on the project can be rolled over onto the next one.

The financial reports were made a part of the motion after council member Peggy Hester said she has asked three times for financial information from the foundation, but hadn’t received any information.

“I don’t think they have any obligation to disclose where their money comes from, but I do think that they probably have an obligation to share publicly (what they have raised),” said Vanhook, who noted he is in an “odd” position to try to address financial questions raised by Hester, as an architect without knowledge of the foundation’s finances.

“How can we proceed, how can we ever get a correct vote, if we don’t know what we’re working with, how much money we have to work with?” Hester asked.

The city isn’t paying for the construction of the cabin, but Stanford owns the land where the fort’s various structures are being recreated. Vanhook said once the non-profit foundation completes a building, the city then owns that structure. There’s another issue concerning that setup that Vanhook brought up at the meeting: The foundation’s building committee has said it cannot spend money donated to the foundation on ongoing maintenance of the fort structures. The foundation believes those expenses belong to the city because the city is the owner of the property, he said.

Pressed further on the issue by Hester, Vanhook compared the situation to construction of a new subdivision: A developer will build roads in a new subdivision, and once those roads are built to code, a city will take those roads into its own system and began providing regular maintenance.

“That relationship kind of exists here. Not in a true, formal way … but it’s similar,” he said.

Vanhook said if the city can’t afford maintenance of further buildings, it could tell the Fort Foundation to stop building on its land.

Others on the council agreed with Hester that they would like to have a financial report from the foundation so they know how much money the foundation has. Stanford City Attorney Christopher Reed said the foundation does have the $35,000 needed to build the next cabin.

Irene Jaggers with the Logan’s Fort Foundation said Tuesday that “we do have the money. The money is here.”

Jaggers said the next cabin to be constructed will be the one that William Meniffee’s family lived in. The foundation has not yet made a formal decision on what structure it plans to build after that cabin.

Cadle will begin construction on the cabin as weather allows and it should be complete this summer, she said.

Jaggers said one of three block houses that were part of the original fort has also been reconstructed. After this fourth cabin is complete, that will leave three more cabins and two more block houses before the structures are all finished. The foundation would also like to completely enclose the fort at some point in the future, she said.

Last Thursday, as discussion at the council meeting continued, council members considered tabling approval of the contract extension for the next cabin until they got a financial report from the foundation. Reed advised against that, explaining that if the contract isn’t extended, Cadle, who is building the cabins, would likely move on to another project and it could be a long time until Stanford can get him back.

Cadle is reconstructing the cabins the same way they were built when the fort was first constructed. Logan’s Fort was completed in 1777. Cadle uses logs and notches them with a broad ax, according to news archives.

Cadle will be in attendance at the upcoming Logan’s Fort Siege event, scheduled for May 17-19, and will be doing a demonstration for attendees, Jaggers said Tuesday.

In related business, Stanford Mayor Eddie Carter said the city plans to repair the fort’s main gate, a necessary repair to allow the annual siege event to take place. The cost should is expected to be “hundreds,” not thousands, of dollars, he said.