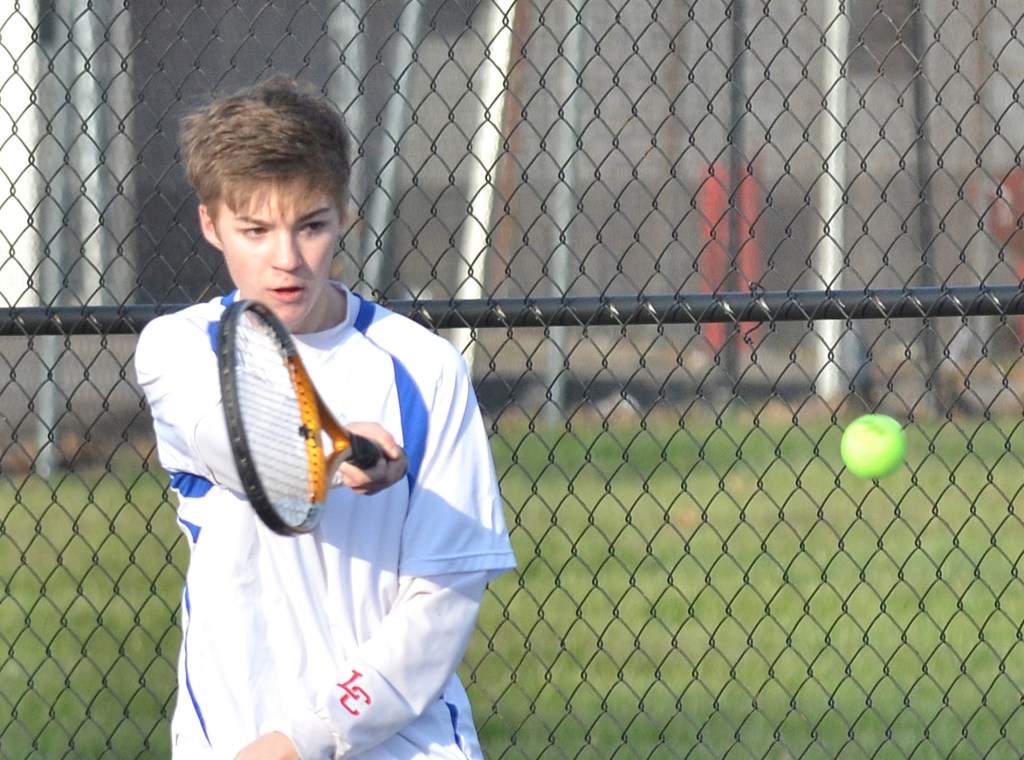 Photo by Nancy Leedy LINCOLN’S Carter Story, pictured in action on the LCHS courts, and his Patriot teammates struggled against visiting Somerset in their final match before Spring Break.

STANFORD — The Lincoln County High School tennis teams got in one final match before the heavy rains set in and the start of Spring Break, with Somerset visiting the Baughman Bros. Courts at LCHS.

Unfortunately for the Lincoln teams, there would be no victory celebration at match end as the Lady Patriots dropped a close match to the visiting Lady Briar Jumpers, falling 6-3, and the Patriots were shut out 9-0.

The Somerset girls outscored Lincoln in both singles and doubles play, showing a 4-2 advantage in singles and a 2-1 edge in doubles.

It was not an easy road to victory for the Somerset girls as Lincoln challenged in four of the six matches lost.

Savanna Smith got four games on Lady Briar Jumper Charity Nickel before falling 8-4 at one in singles and Grace Muse picked up three games in a 6-3 loss to Alison Lewis at five. In doubles, Raelyn Amon and Wilks battled back and forth with Somerset’s Mackenzie Clouse and Neely in an 8-5 loss at the one seed and Smith and Towle challenged Somerset’s Nickel and Qasem in an 8-4 loss at two.

The Somerset boys proved to be the dominant team in their shutout win over Lincoln, giving up only five games to the Patriots in the nine matches played.

Colin Green picked up the most games for Lincoln in the match, getting two games in a 2-6 singles loss to Somerset’s Mason Reece at two, then adding one game in doubles. Green and Lee Amon fell 1-8 to Reece and Amin Katanbat at two. Amon also picked up a game in singles in a 1-6 loss to Jonathan Nickel at three. Lincoln’s Caydunn Randall and Baylor Mattingly, playing at three in doubles, also won a game in their 1-6 loss to Nickel and Hayden Back.