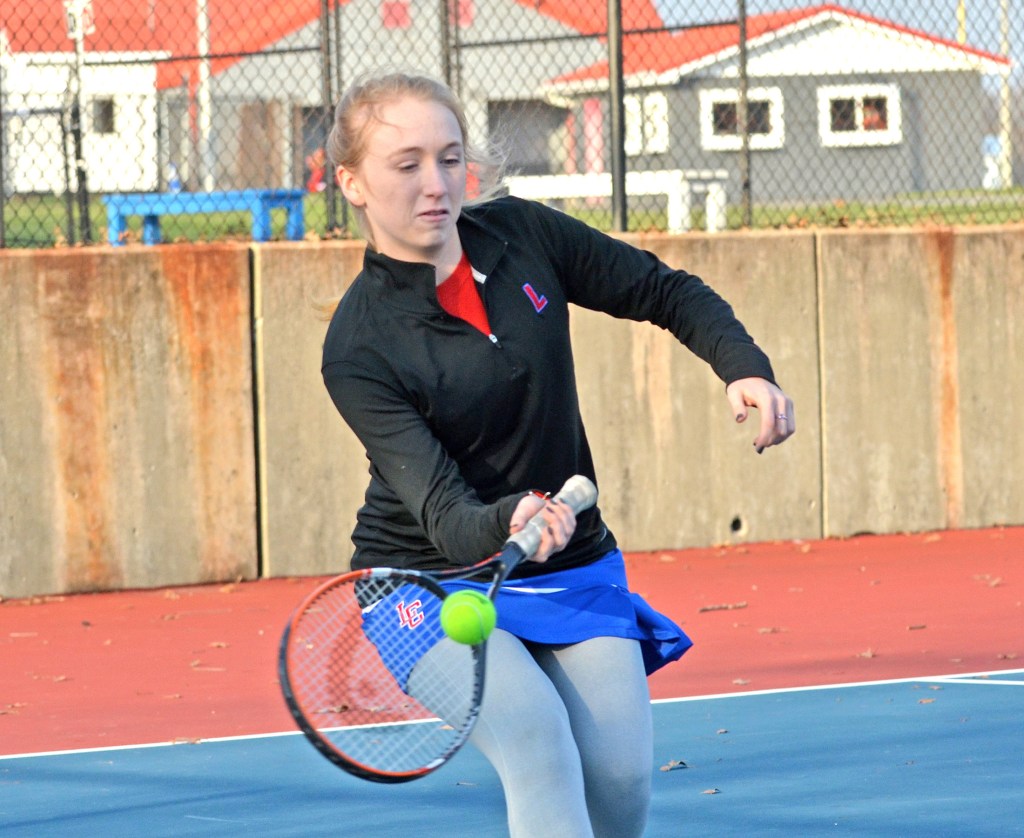 Photo by Nancy Leedy GRACE MUSE of Lincoln County goes for a return in tennis action at LCHS. The Lincoln girls picked up a win over Garrard County, but fell to both East Jessamine and Wayne County.

STANFORD —  The Lincoln County High School girls and boys tennis teams both courted victory in a home match with Garrard County Friday, but they couldn’t match those results in a return to the Baughman Bros. Courts Monday afternoon, with visiting Wayne County getting the sweep.

In the match with Garrard County, the Lady Patriots rolled 8-1 while the Patriots edged the Lions 3-2.

The Lincoln girls took command of the match in singles play, netting “W’s” in five of the six matches. Savanna Smith came away with an easy 6-0 win in the top-seeded match, with Garrard County’s Courtney Gettler having to forfeit the match to go to work. Alyea Towle blanked Garrard’s Anna Lee Wilson 8-0 at two and Raelyn Amon gave up just one game in her 6-1 win over Macie White at three.  Kaitlynn Wilks came away with a 6-4 win over Kristen Lane at four and Emily Byrd made it 5-1 by beating Sydney Arnold of Garrard 6-2 at six.

Grace Muse came oh-so-close to a win in her match at five before falling 5-7 to Emily Gettler.

It was a clean sweep in girls doubles for Lincoln. Amon and Wilks defeated Gettler and Gettler 8-5 at one, Smith and Towle won 8-1 over Lane and Arnold at two and Muse and Josey Norden won 6-3 over Wilson and Grace Stinnett.

A 2-0 effort in doubles gave the Lincoln boys the edge they needed to beat Garrard.

The Patriots trailed 1-2 after singles play, with Baylor Mattingly notching the only home-team win, beating Garrard’s Tyler Ray 8-1 at the three seed. But the Patriot doubles teams of Carter Story and Kade Bandura and Lee Amon and Colin Green came through to pull out the win by sweeping the doubles matches to push past Garrard 3-2.

Story and Bandura, playing at one, blanked Zack Jackson and David Pengolden 8-0 and Amon and Green handily defeated Luke Alford and Sean Brunelle 8-1 at two.

It was the visitors emerging as victors when Lincoln took the courts Monday for a match with visiting Wayne County. The Lady Cardinals defeated the Lady Patriots 6-3 and the Cardinals put away the Patriots 7-2.

Picking up wins for the Lincoln girls were Smith and Hale in singles and the doubles team of Smith and Towle. Smith won 8-1 over Macy Weaver at one in singles while Hale won 6-1 over McKenzie Crabtree at six. Smith and Towle teamed up at two in doubles and took down Nicole Heese and Weaver 8-4.

On the boys side, it was Gavin Fowler winning 6-2 over Preston Reynolds at six in singles and then Caydunn Randall and William Hawkins teaming up at three to beat Giuseppe Napoli and Wesley Cares 6-3.

The Lady Patriots played a total of three matches this past week, traveling to Nicholasville last Thursday for a match at East Jessamine. Lincoln came up on the wrong side of the scorecard in the match, falling 4-1.

Adie Hogue had Lincoln’s lone win in the road match, defeating East’s E. Babashevich 8-6 at three in singles. Towle almost pulled out a win, getting six games on East’s H. Timberlake before going down 8-6 at one.