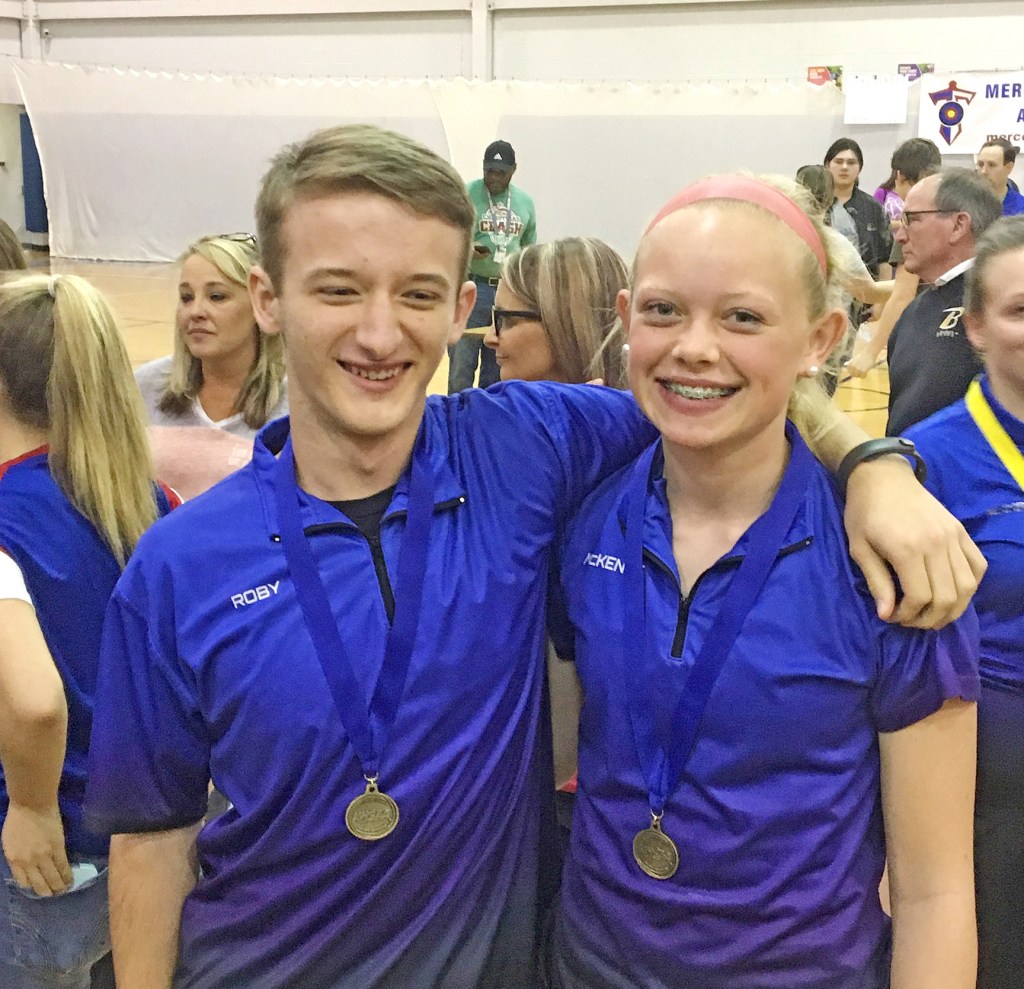 LINCOLN COUNTY’S Roby Mullins, left, and McKenzie Settles after their KHSAA Region 9 Archery Tournament wins Saturday at Mercer County Intermediate School in Harrodsburg. Mullins is a senior at LCHS and Settles is a sophomore. Mullins and all of the Lincoln boys’ archery team, Settles and Emily Patterson all qualified for the state competition at region.

Roby Mullins was the top male archer and won the high school and overall divisions as he led Lincoln County High School to the team title in the KHSAA Region 9 Archery Tournament at Mercer County Intermediate School in Harrodsburg.

Mullins, a senior, scored a 294 out of a possible 300 with 24 tens to win the individual titles. Lincoln claimed the team title in the high school division with a score of 1,988 to beat runner-up Pulaski County by 15 points. Boyle County finished third with a 1,950, McCreary Central was fourth with 1,918 and Southwestern rounded out the top five of 11 teams with a 1,916.

The Lincoln boys would not be the only local archers celebrating victory at regionals, however. McKenzie Settles, an LCHS freshman, had cause to celebrate as well as she finished as champion of the girls high school and overall divisions. Settles and Haley Cummins, a Pulaski County junior, both scored a 291 with 21 tens in the tournament to lead their division.

In the boys high school division, three points was the difference between first and fourth place in the individual competition. Nick Casada, a senior at Somerset High School, took runner-up honors with a score of 293, Luke Stevens of Pulaski County took third with a 292 and Lincoln’s own Jacob Holtzclaw, a sophomore, placed fourth with a 291.

Lincoln would claim three of the top six spots in the boys high school division, with James Shaddox, an LCHS junior, securing sixth place with a 285.

The Lincoln girls team placed third out of eight teams overall with a score of 1,952. Southwestern won the girls team title with a 1,980, Pulaski County finished in the runner-up spot with 1,978, Boyle County was fourth with a 1,903 and host Mercer placed fifth with a 1,889.

With the winning and runner-up teams advancing to state, the Lincoln boys team will all move on to the state competition at the Kentucky Exposition Center in Louisville. The top four individuals in each regional division not advancing with a team shall also advance to state, setting Settles and Patterson up for a state trip, too.

Results for the Lincoln archers follow by boys and girls division. The number of tens by each archer is in parentheses.