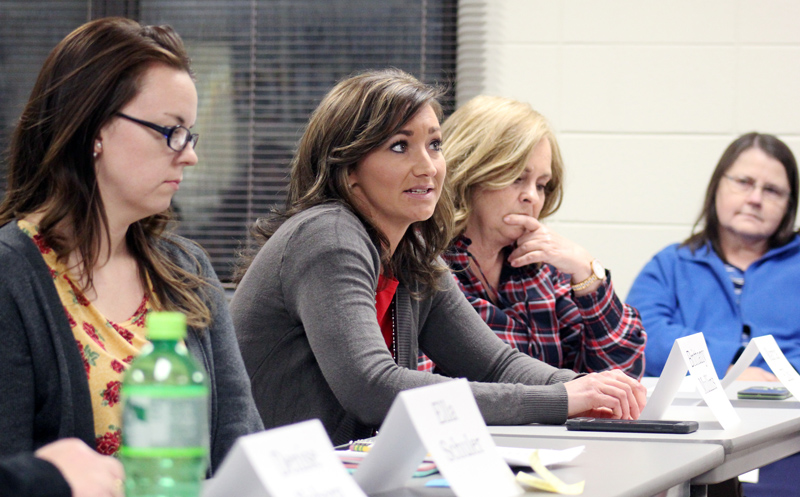 STANFORD — When a student suddenly starts missing a lot of school, it raises flags for social service workers. While sickness and injury can account for some attendance issues, an unstable home environment can also be the cause.

That was the case for one Lincoln County student who prompted a visit this month from Kevin Coots, a social service worker who bounces between the middle and high school, as well as the alternative school.

Coots described the situation to school board members, as well as a room full of district staff, during last week’s regular meeting.

The following night, shots were fired at the house where the student was staying, according to Coots.

“…because the brother-in-law, you know, he sells drugs in this area of the county and somebody came by and was upset about a drug transaction and shot up the house,” he said. “Fortunately nobody was hurt, and law enforcement is involved in that, but this young man and his siblings, that’s the kind of life they live in.”

Coots said that’s just one of many experiences that demonstrates the need students have for social service workers in schools who are trained to provide social-emotional support.

The discussion of providing more mental health services for students is one that is taking place in many school districts across the state, and even the country, after recent school shootings in Kentucky and Florida.

“I think being a social worker has (given) me a different perspective on how these kids have to learn in the conditions that they live in,” Nettles said. “Each section of the county has a different need.”

Bullying prevention is also a focus for social service workers, she said, and trauma-informed care training has helped provide them with the tools needed to recognize and address students who have been exposed to trauma.

“We learned about a thing called the ‘empty backpack’ and how kids just bring what they’re experiencing from home into their school life,” Nettles said.

Through her transition from the Kentucky Department for Community Based Services (DCBS) to a social service worker position in the school district, Nettles said she has learned a lot about how the two are connected.

“I’m learning a lot coming from DCBS and then entering into the school and how it all intertwines and how different counties work differently in regards to social work,” she said. “I do see a need for social service positions in this district. It’s a great need and it’s a good program.

From that, Muse said she works with small groups of students focused on specific behaviors such as resilience and self-regulation.

“Unfortunately, anxiety has become a big issue for our children,” she said. “They’re under so much pressure, way more pressure than I was ever under. So I have actually started two anxiety groups and this is with first grade, and second grade and third grade. The pressure is real.”

Muse said anxiety results from the pressure to succeed and test well, but also from living conditions outside of the school.

School Board member Marvin Wilson asked if there was anything the school district could do to remove students from a home.

“That’s a really long process to remove a child from a home,” Daveida Smith, an exceptional child teacher leader at the middle and high schools, said. “That’s why we do what we do, so that we can help in that process. Parents don’t always have what they need in their homes, either.”

“You have no idea until you step foot in a child’s house,” she said. “…We’re trying to, all of us I think, put together tools for these parents, tools for the teachers, tools for the children, because this anxiety — everything in their world is so real and you and I can’t understand it because we didn’t live it. We don’t know what it’s like to go home and not have food for the entire weekend.”

Bringing together the various community supports such as social services, judges and court designated workers and creating an overall system of support for students and staff has been one of many goals of the district’s Academic Division, according to Chief Academic Officer Jackie Risden-Smith.

It’s not rare for Lincoln County High School to send students to outside psychiatric facilities, according to LCHS counselor Tracy Wright.

In just one week, six suicidal high school students were referred to a psychiatric hospital, she said.

“It’s weekly that we send a student to the Ridge or Rivendell or to a psychiatric hospital for mental health or suicidal ideation,” she said. “Our kids’ mental health is serious. It’s not just the anxiety. It’s drugs and alcohol, depression, bipolar, separation anxiety. The mental health is atrocious and that needs to be addressed as well with full-time counselors and more social workers and more school psychologists.”

Until then, things are going to get worse, she said.

“Until we address the mental health issues and realize they need the help and the help is provided, it’s going to get worse,” she said.