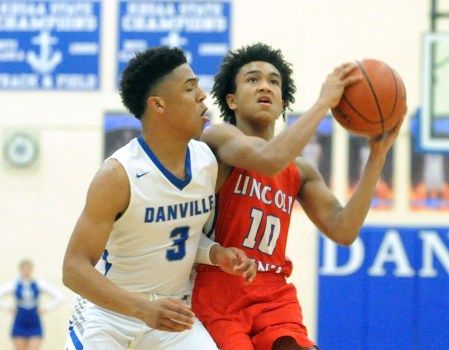 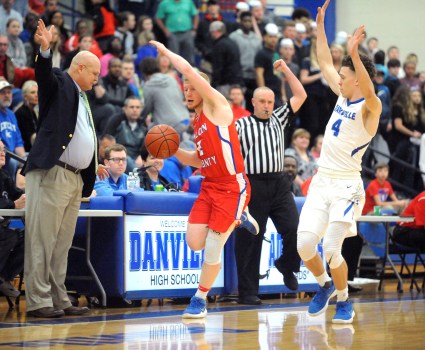 LINCOLN COUNTY’S Bryson Yaden tries to tiptoe along the sidelines as he brings the ball up court in the first half Wednesday night in the 45th District Tournament semifinal round. Danville coach Ed McKinney tries to help the officials on the play. Guarding Yaden is Jared Southerland. The Admirals eliminated the Patriots in the game, winning 75-63. 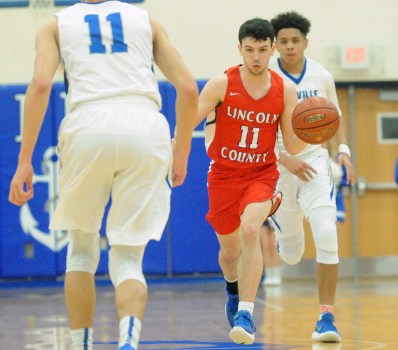 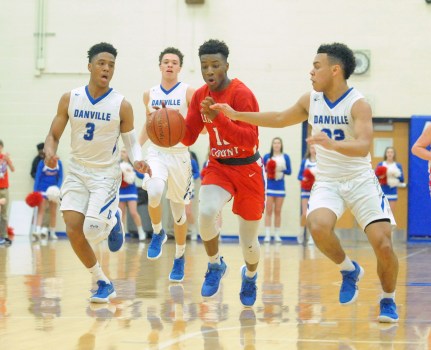 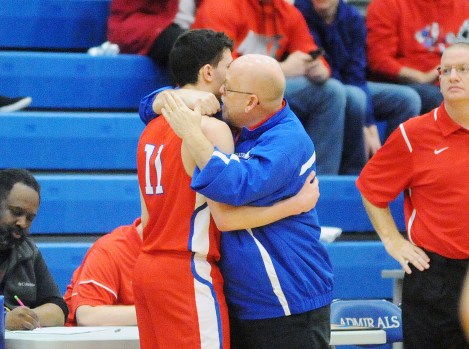 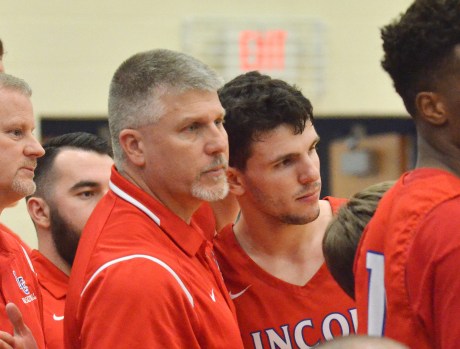 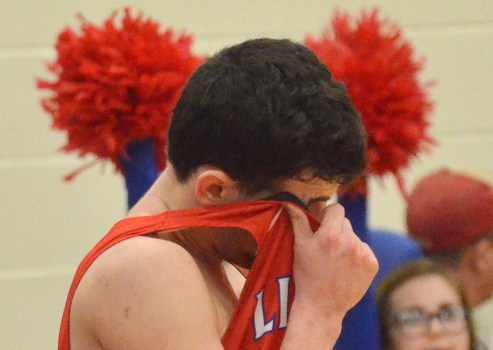 DANVILLE — The Lincoln County boys basketball team will not get a chance to defend its district title.

In the first two meetings between the Danville boys and Lincoln County this season, it was two extremely tight contests where the Patriots ended up getting the win late, once in the final seconds.

So when the two teams met up for a third time Wednesday night in the semifinal round of the 45th District Tournament, the Admirals were looking to avenge their two losses and eliminate the visiting Patriots.

Danville did just that, knocking Lincoln out of the chance to defend its title by beating the Patriots 75-63.

It was another tight ballgame between the two teams early on, with the lead flip flopping in the first two quarterstops. Lincoln led 14-11 after the first quarter and Danville took a 31-29 edge into the half. But the Admirals would distance themselves from the Patriots in the second half, breaking on a 23-13 run in the third quarter to set them on course for the win and a meeting with crosstown rival Boyle County in Friday’s championship game.

Lincoln which has played in seven straight district championship games, winning the last four, falls to 13-18 for the season.

“This one hurts,” Lincoln coach Jeff Jackson said. “We knew coming in that we would have to play super, super well and we felt pretty good at the half, being down just two. They just came out in the second half with a lot more energy. They attacked the basket. They went coast-to-coast. They pushed the ball and got in the lane. It’s hard to beat a team three times and we had trouble on their floor tonight, especially defensively.”

The win improved Danville to 15-14 for the season and earned the team its first trip to the 45th District championship game since 2011.

“It’s been a while,” Danville coach Ed McKinney said. “It’s a big win for us. Lincoln has been kind of the standard. Them and Boyle have both been really good, so for us to beat Lincoln or Boyle is a big win for us.”

“It’s always good to beat them (Patriots) because you feel like they are going to be well-coached and they are going to do what they’re supposed to do, and if you’re going to get a win over them, you’ve got to do a lot of things right,” he said. “And we did. The second half we made good decisions. We were sharp with the ball. We may have forced a couple shots, but we stayed aggressive. The last time here we got tentative and we stopped attacking and threw it away. When you attack you’ve got to hit free throws so we stayed aggressive, we got fouled some and we went to the line and made them. The second half we just played really well.”

Tanner Ford went baseline a little over a minute into the second half to kickstart the Ads’ game-changing run and Jared Southerland followed with his own bucket in the paint before Ford hit again.

Then, Danville’s double-digit trio of DeShaud St. Martin, Zach Thornton and Dante Hayden went to work to turn a one-point edge into a double-digit lead. St. Martin, who had a game-high 22 points, scored on a baseline drive then converted on a three-point play, Thornton who finished with 20 points, hit inside before stepping back for a 3-pointer, then Hayden, who scored 12 points on 4-for-7 shooting from 3-point range, hit two 3’s to close the third with Danville on top 54-42.

Danville went on to outpoint Lincoln 19-17 in the final period to secure the big win.

“Everybody played well tonight,” said McKinney. “Zach Thornton was good, Dante was really good, Tevin Kavanaugh was really good the first half. I thought he came in and gave us a spark. DeShaud was really good. The last half of the year he has been rock solid. I thought David Walker was good. Jared he’s a good player and gets a lot of done. We played really well, especially the second half.”

Chase Phillips, who had a team-high 18 points to lead Lincoln, scored eight points in the opening frame as the Patriots posted a 14-11 lead. Bryson Yaden scored off a Riley Bodner assist to open Lincoln’s scoring to make it 4-2 then Phillips scored four straight points to give the team its first lead 6-4. Blake Smith, who finished with 16 points, sank two free throws and Darius Napier added a layup for the Pats’ largest lead of the night, 10-6.

Hayden got Danville within 12-11 with a 3-pointer with just seven ticks left on the clock in the first, but then he turned around and fouled Phillips on a 3-point attempt. Phillips converted on two of the three free throws for the 14-11 margin.

“Gosh, we were jittery that first three or four minutes. We were nervous, but that’s good because it means your kids care,” said McKinney. “They’re good offensively. Phillips is hard to guard and the little eighth-grader (Jaxon Smith) is going to be a great player and then (Blake) Smith shoots it in. You’ve got to give up something. If you go man, they drive it. If you play zone, they shoot it in. I thought after we settled down we were solid all the way and our defense was good enough.”

Thornton nailed a 3-pointer to open the second quarter and St. Martin followed with a bucket to nose Danville back in front 16-14. Bodner converted on two free throws to deadlock the game before Hayden bombed in his second trey to put the Admirals on top to stay 19-16.

Danville outrebounded Lincoln 27-22, with 14 offensive boards. Thornton had five rebounds for the Ads and St. Martin had seven. Bodner grabbed a game-high 11 rebounds for Lincoln to give him a double-double for the night. Phillips had five boards.

“We told them coming in tonight the number one key to the game was, ‘You’ve got to rebound. You’ve got to keep them off the offensive glass.’ And we didn’t,” Jackson said. “You can’t let a team have second and third shot opportunities and we did. And they capitalized on it. They played harder than we did. They played more aggressive than we did tonight.”

“Got to give them credit. They hit some shots. They moved the ball well. They attacked the basket and really went to the glass hard. They played better than we did. Their coaching staff had them ready and they came in here tonight and defended their house and took care of business and they are advancing.”

The district semifinal game was the final game for one senior Patriot and three team managers.

“I feel for Chase (Phillips), Justin (Blevins), TT (Wilkinson) and Tate (Newcomb),” Jackson said. “It’s tough for Chase. He has worked so hard to make himself into a good basketball player. He made All-Region and All-Region Academic as well. People don’t realize the time he put in to become a good, good basketball player. All four have put a lot of time into being a part of the team and we will miss them.”