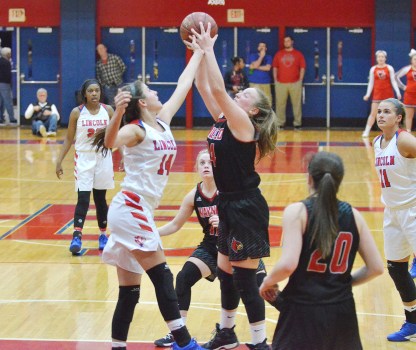 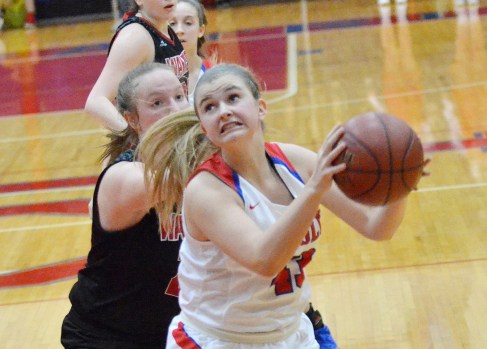 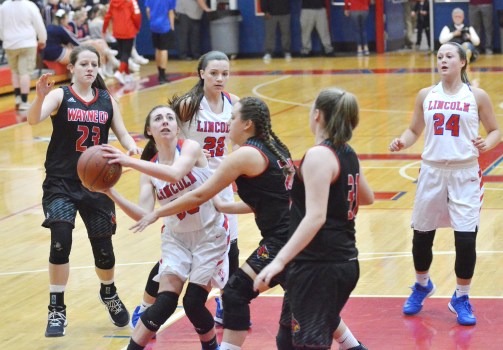 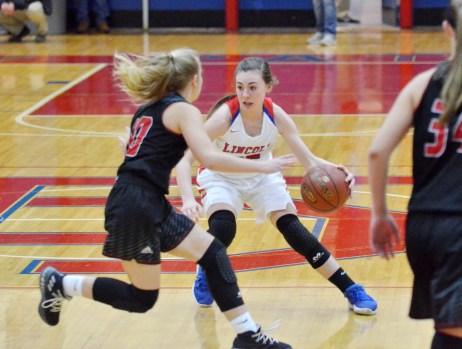 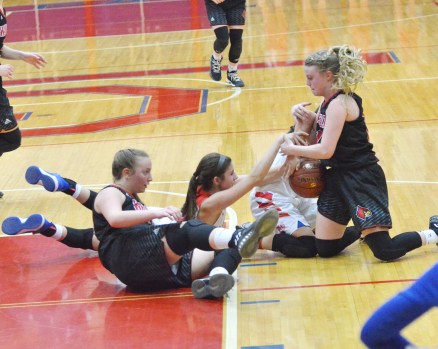 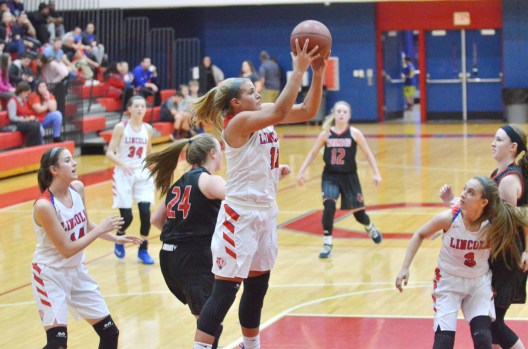 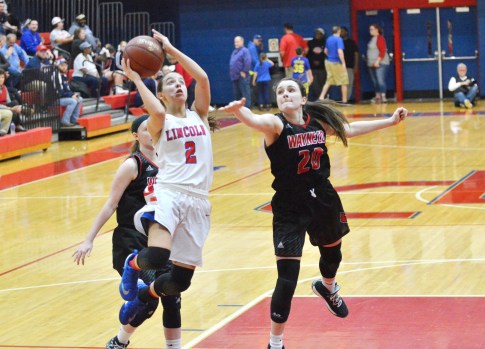 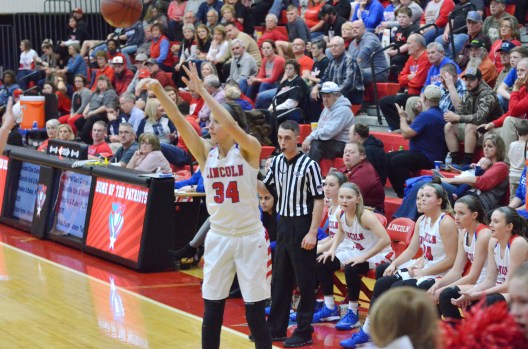 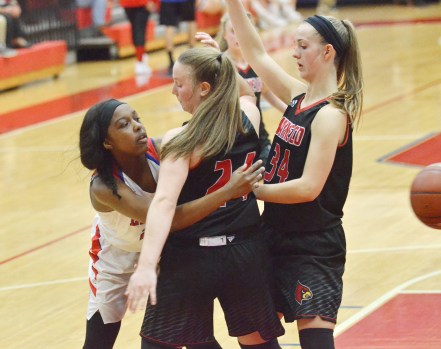 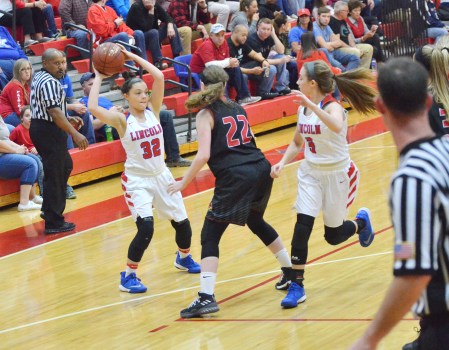 Photos by Nancy Leedy LINCOLN COUNTY’S Cheyenne Releford prepares to pass around Wayne County’s Amber Jones to teammate Anna Lane in second-half action of the Lady Patriots’ 81-49 win in the quarterfinal round of the 12th Region Tournament Tuesday at LCHS. Lincoln will now play reigning region and state champion Mercer County Friday at 8 p.m. in the night’s second semifinal game.

STANFORD — The Lincoln County girls rolled to an 81-49 victory over Wayne County in the quarterfinal round of the 12th Region Girls Tournament Tuesday night at LCHS.

With the exception of an early 5-4 deficit, Lincoln led basically from start to finish as the team moved on for the win and a spot in Friday’s semifinal round against defending region and state champion Mercer County.

Wayne (9-21) posted an early 5-4 lead on a 3-point shot by Haleigh Criswell with 6:26 left in the first quarter, but Lincoln answered with three straight 3-pointers to go on top to stay.

The Lady Patriots never looked back.

Emma King, who had a game-high 28 points, including 12 points from long range, bombed in Lincoln’s first two 3’s then Trinity Shearer followed with her own trey to put the team up 13-5. The lead was 28-18 at the end of the first and the Lady Patriots cruised from there, using a 24-7 second-quarter scoring run to extend their lead to 52-25 at the half.

Lincoln (24-6) led by as many as 34 points in the second half before moving on for the win.

“I was really proud of how we busted out the second quarter and kept the momentum for the third and fourth quarter,” Lincoln coach Cassandra McWhorter said. “It’d been a long time since we’d seen them. They’ve improved and they showed the first quarter the improvement they’ve had. I was proud of the girls for staying together, staying the course and doing the things that we needed to do to get the ‘W.’”

The Lady Patriots, who finished at 57 percent from the field overall (33-for-57), shot a blistering 70 percent in the first quarter, connecting on 12 of 17 shot attempts to post a double-digit lead. The team led by as many as 14 points in the first quarter, using a 6-0 run to go up 28-14. Wilks hit inside for two baskets and Anna Lane went baseline for a score in the run.

Jade Turner sank two free throws for Wayne late in the first and Mallory Campbell added a bucket to make it a 28-18 ballgame.

Wayne’s scoring leader Macey Blevins, who finished with 16 points, scored to open the second quarter to get the Lady Cardinals’ deficit back to single digits, 28-20. However, the Lady Patriots would answer with a 24-5 surge to cushion its lead. King came through with 11 points in the run, Wilks added five points, Zaria Napier scored four and Shearer and Haleigh Releford had two points apiece to make it 52-25 at the half.

“Wayne County came out really aggressive and I knew they were going to,” said McWhorter. “They gave us a fight the whole first quarter and into the second quarter. We kept the pace where we wanted the game to be and wore them down a little bit. Blevins, we got her a little frustrated with all the attention we were giving her, and we were able to extend the lead there in the second quarter. I didn’t even realize we had extended the lead the way we had until coach (Rebecca) Shearer said, ‘You’re almost up 30,’ because I get so caught up in the game.”

Haleigh Releford was just one of nine Lincoln reserves seeing action in Tuesday’s win as McWhorter worked her entire bench. Releford was one of three subs getting in the score column with seven points. Ally Lynn and Lane both scored two points.

“For some of them it’s their first regional experience ever,” McWhorter said of her subs. “It’s good to get everybody in that first game and give them a taste of a regional tournament and the bigger crowd and the big atmosphere.”

Wayne shot 33 percent from the field Tuesday, going 16-for-49 overall. The Lady Cardinals were 11-for-19 from the foul line compared to a 7-for-11 stint by the Lady Patriots.

Lincoln had six turnovers for the night while Wayne had 12.

“When you’re coaching teenagers, you’re always worried about that a little bit,” she said. “But I knew that if we just came out tonight and played our style of basketball, team basketball, and just moved the ball and played together that we should be okay. And we were. We get to play again Friday.”