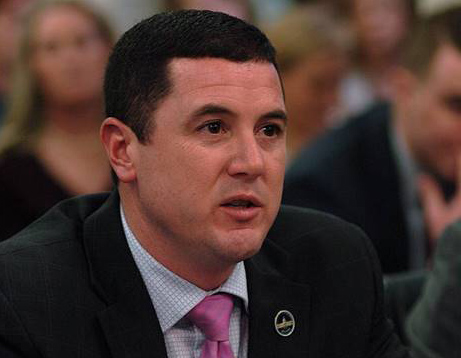 Photo courtesy of LRC Public Information Above, Representative David Meade presents House Bill 1, comprehensive reforms to Kentucky’s adoption and foster care placement systems, before the House Health and Family Services Committee. The goal of the legislation is to ensure that every child is placed into a loving home in the most timely manner possible.

House Bill 1 sponsor and House Majority Caucus Chair David Meade, R-Stanford, says the bill will improve Kentucky’s adoption and foster care system for more than 8,600 children in state out-of-home care who may or may not be able to return home to family.

Meade, who is the father of both an adopted child and a biological child, said it takes “a special love” to foster a child, adopt a child, and give birth to a child who the birth parent may not be able to keep.

“We owe it to all these children, the parents, and the families across the state to start reforming a system in desperate need,” said Meade of the bipartisan bill that grew out of the work of last year’s House Working Group on Adoption. “This is an opportunity to do something truly remarkable for the children and the families of this state and start changing lives for some of the most vulnerable.”

A key provision in the bill would allow the state to petition for involuntary termination of parental rights of a mother who won’t seek drug treatment within 60 days after giving birth to a drug-addicted baby. It is considered less severe than an earlier provision removed from HB 1 that would have allowed mothers to face child abuse charges if their child is born drug-addicted.

“Make no mistake though—when you see these children drug addicted…it’s one of the worst things you can do to a child. It’s not acceptable and it should be the crime,” said Meade.

Provisions in HB 1 that would expand the definition of a “blood relative” for child placement and ensure that dependent, neglected or abused children placed in foster care are reunified with family or placed in a new permanent home in a timely manner were also considered key to the bill’s passage, Meade explained.

The bill would require more case reviews for each foster child, and require that children in foster care for 15 cumulative months out of a 48-month period be reunified with family “if it’s safe to do so,” said Meade. If not, the state could start the process of petitioning the courts for termination of parental rights.

In keeping with around 27 other states, Kentucky would also create a confidential “putative father registry” under HB 1. The registry would allow a man who thinks he could be the father of a child – but whose paternity hasn’t been established and who was not married to the child’s mother before or at the time of birth – to register with the state in order to be notified of the child’s prospective adoption.

More work on adoption and foster care could come in later years through the work of a Child Welfare Oversight and Advisory Committee that would be created by HB 1, said Rep. Joni Jenkins, D-Shively. Jenkins co-chaired the House adoption working group last year with Meade.

“The decision to terminate someone’s parental rights is a very, very serious and important one. And I think this task force was very open to trying to balance those rights with what is best for children,” Jenkins said, adding the new committee proposed in HB 1 can recommend changes as needed in future years.