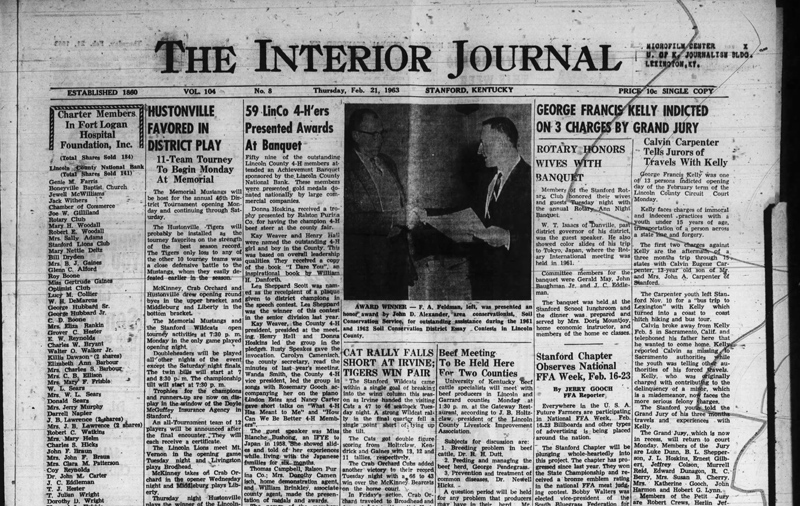 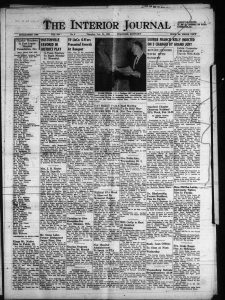 Short Saufley purchases the Hastie Building Supply firm, changes the name to Builders Supply and plans to move to the former Cowden Manufacturing building that houses Louvers and Dampers at U.S. 27 and Main Street.

Lincoln County pickle growers get good news from Hirsch Bros. packing company in Louisville – prices will be up in 1963. Among the growers in Lincoln County are Ernest Brock of Crab Orchard, August Ridder of Waynesburg and Ernie Todd and Leslie Harris, both of Eubank.

David Horseman, a freshman at Stanford High School, is named to the 100-member All-State Band.

The last offering of Sabin oral polio vaccine to be given Sunday.

The eight members of the county school board vote to hire William F. Russell as superintendent at a salary of $2,400 a year. The Crab Orchard schools join the county system and the three board members from Crab Orchard gather enough support to dump Russell before he starts.

Tex Ritter and his horse White Flash star in Tex Rides with the Boy Scouts in the feature at the Lincoln Theatre.

Joseph K. Carson, a Lincoln County native who moved west and was elected mayor of Portland, Oregon, was playing a parlor game at a party in which he had to balance himself seated on the round side of a milk bottle and write his name on a piece of paper. Milk bottles being glass are prone to breaking and this one did. It took three stitches to close the wound.

A tobacco warehouse and a food processing and canning plant are under construction in Kings Mountain.

Joseph Severance presents a gold watch to his son Will on his 21st birthday. Will earned the watch by not cursing, smoking, drinking or chewing before he turned 21.

Sexton J.M. Hendricks reports that during the previous year, 22 adults and 10 children were buried in Buffalo Springs Cemetery.