Lincoln schools could lose 11 teachers due to state budget cuts 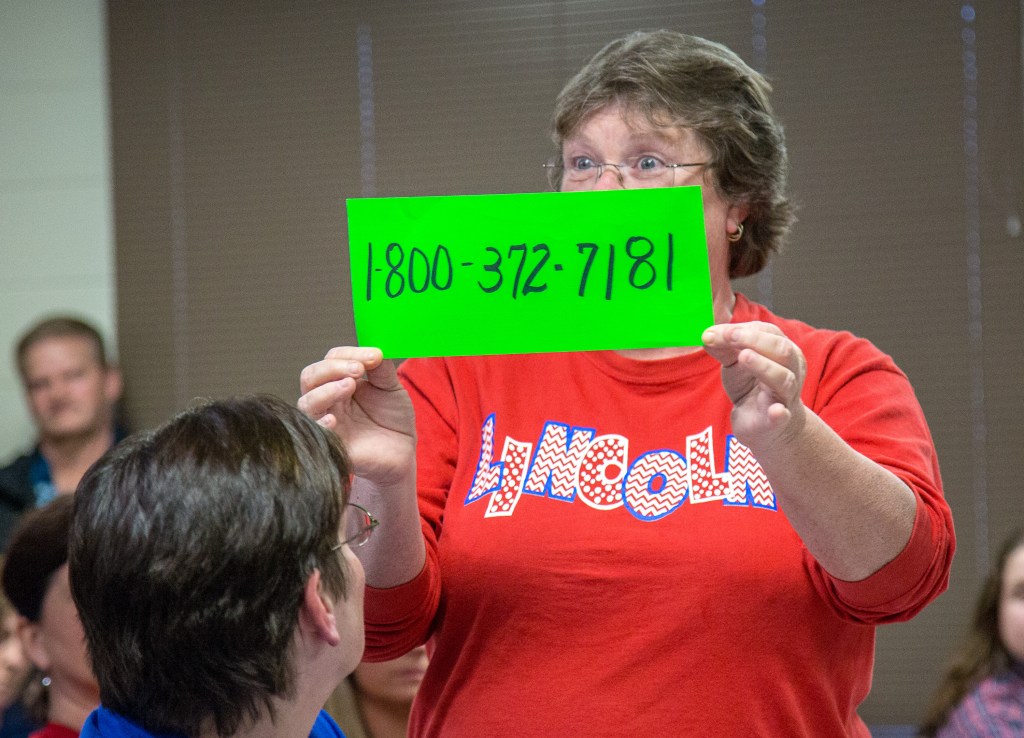 Gloria Sneed, a retired Lincoln County School District employee, holds up a sign with the legislative message line phone number on it during public comments at Thursday night's school board meeting. (Photo by Ben Kleppinger)

Deep education cuts proposed at the state level are threatening to force a nearly 7.5-percent reduction in the number of general-fund teachers in the Lincoln County School District, potentially resulting in the elimination of popular programs such as high-school agriculture classes.

Lincoln Superintendent Michael Rowe told Board of Education members Thursday night that cuts Gov. Matt Bevin wants to make and the state House’s budget bill would result in a loss of about $1.9 million in education funding for Lincoln County. Lincoln Superintendent Michael Rowe tells the Lincoln County Board of Education there can be no solution to the district’s budget woes that makes everyone happy. (Photo by Ben Kleppinger)

In order to put a dent in the possible deficit, Rowe made a recommendation Thursday night that Lincoln County cut its teacher staffing allocations for the next school year by 11.3 positions. Such a cut would reduce the average student-to-teacher ratio from 25-to-1 to 28-to-1 in grades four through 12.

The board did not accept the recommendation Thursday night, instead tabling the matter until a special called meeting 5:30 p.m. Tuesday. In the interim, board members said they want to pour over any other solutions that could at least reduce the cut to teachers.

Director of Finance Marsha Abel said Friday the district currently pays for the equivalent of 150.8 full-time teachers out of its general fund.

A reduction of 11.3 teachers represents almost 7.5 percent of those teaching positions.

Abel said the $521,000 savings figure is an estimate based on the average teacher’s salary in the district of about $46,000.

The board met before a standing-room-only crowd at the district’s Student Support Center. Members of the public and district employees had turned out to comment on the proposed teacher cuts, as well as another cut Rowe had suggested previously: closing McKinney Elementary School.

Rowe presented both options during a working session of the board Feb. 8. He confirmed the day after the meeting that the board did not want to consider closing McKinney and instructed him to look instead at staffing cuts across the district.

But many in the audience Thursday night were still concerned McKinney was on the chopping block.

Heather Pendleton, a social studies teacher at McKinney, said she did not like that Rowe presented the idea of closing McKinney without any warning.

“Major plays were called last week and members of the team were not informed of the plays. The result — confusion, chaos and frustration among many.”

“There’s only so much that can be cut; we need to start funding,” she said. “The state has proven they (won’t fund us). It falls on us. Taxes. We’re going to have to fund it.”

Others pleaded with the board to avoid cutting teachers.

Sneed implored everyone at the meeting to call Gov. Matt Bevin, while holding up a neon sign with the number for the legislative message line in Frankfort.

At last week’s working session, Lincoln County High School Principal Michael Godbey told board members the proposed teacher cuts — 4.9 of the lost positions would be taken from the high school — would lead to the elimination of career pathways for students.

High- and middle-school programs that would likely be cut include agriculture, foreign language, family consumer science and technology courses that are not included in the overall accountability assessments.

“We have a large population of kids who benefit from those programs,” Godbey said last week. Reed Campbell, president of Lincoln County FFA, tells board members cuts to teachers at Lincoln County High School would seriously harm the ability of students to career-ready in fields like agriculture. (Photo by Ben Kleppinger)

“Five years ago, Lincoln County High School was classified as a low-achieving school. Now, we are a school of distinction and striving to become a top-10 high school in Kentucky. It is because of the motivated staff in every department that our students are high-achieving in school and in life,” Campbell said.

Campbell said 450 of the high school’s approximately 1,110 students are enrolled in agriculture classes.

“That’s 41 percent of the student body that will lose the chance to be career-ready in not only our community’s largest industry, but our nation’s single largest industry.”

Campbell, who is president of Lincoln County FFA, said 246 students are members of his group.

“With all the violence and dismay in public schools today, would you or anyone be in favor of downsizing any program that gives our students a place to belong and promotes integrity, leadership and service to others?” Campbell asked the board. “I’m going to ask you as leaders to find a way to work with this budget that you’ve been given to keep all of our programs and all of our teachers.”

“We are in a position, as a district, that no matter what decision the board makes tonight, it’s not going to make the people happy,” Rowe said after public comments had concluded and the board was considering the staff allocations agenda item.

“When I interviewed for this job, I think one of the qualities you were looking for was somebody who could make a tough decision when times and things were tough,” he said. “This is one of those times.”

Board member Alan Hubble said he sat down and did some math on what it would take for Lincoln County to make up for the state cuts. Lincoln County Board of Education Member Alan Hubble tells those gathered at Thursday night’s board meeting it would take a 56-percent increase in property taxes to make up for the $1.9 million the state wants to cut from the school district. (Photo by Ben Kleppinger)

School districts in Kentucky are allowed to increase their property tax revenue by 4 percent every year without the increase being subject to a voter recall. Anything above 4 percent can be challenged through a petition and recalled if enough people say no.

Hubble said the board took the 4-percent increase last year, which generated almost $150,000. Essentially all of that covered scheduled salary increases for teachers.

“We didn’t generate any extra income … we didn’t actually help the school system any; we were just paying our bill.”

Hubble eventually made the motion to table Rowe’s recommended cuts until a special called meeting.

“If there’s any way at all we can come up with some way to save another $500,000, then I’m all for it, but at this point, everybody needs to be prepared,” Hubble said. “I’m not saying it’s not going to happen one way or the other, but … when the end of the day comes, we have to come up with $2 million that the Kentucky government is not sending back to us.”

The Lincoln County Board of Education will hold a special called meeting 5:30 p.m. Tuesday, Feb. 20, at the district’s Student Support Center, 305 Danville Ave. in Stanford. The purpose is approving staffing allocations for the coming fiscal year. The tentative allocations must be approved by the end of the month so that principals can begin planning. Final allocations are not due until May.

Burglary suspects claim they were at abandoned house to…