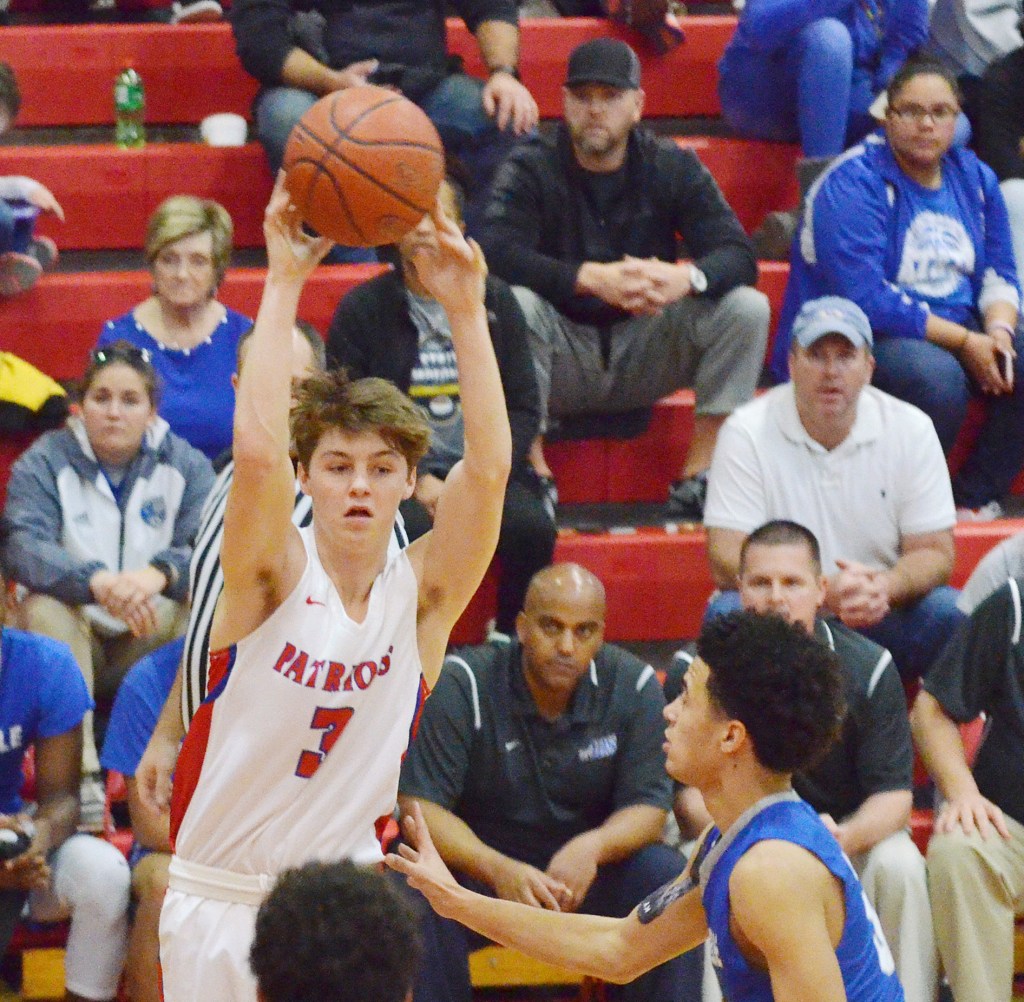 LEXINGTON — One spurt, one run.

That is what separated the Lincoln County and Lexington Catholic boys’ basketball teams Tuesday night after a long back-and-forth battle.

In a game that saw 12 lead changes, with leads that averaged from one to four points on both sides, the Knights finally pulled away to notch a 71-57 victory, using a 24-4 run in the fourth quarter to set them up for the win.

“You make mistakes against teams the quality that they are and they make you pay, and we made mistakes,” Lincoln coach Jeff Jackson said. “And their pressure is relentless. It’s a good game for us going in for our district because of the pressure Catholic brings on you.”

Lincoln’s Chase Phillips tallied a field goal and sank two free throws and Jaxon Smith nailed a 3-pointer to put the Patriots on top 48-47 with 6:15 to play when Keegan Bailey, who had a game high 24 points for LexCath, ignited the late run with a baseline bucket. Bailey scored 14 of the Knights’ 24 points in the run, including two backboard jarring slam dunks – he had four overall – and he capped the run with his fourth 3-pointer of the night for LexCath’s largest lead of the game, 71-52.

Lincoln, which blistered the nets for 61 percent in the first half (13-for-21), dropped to 39 percent the second half (9-for-23) to finish at 50 percent overall (22-for-44). And several of those misses came during LexCath’s breakout run.

“It was 58-52 and we took a bad shot. We missed a layup. We turned it over. We missed another layup and then it’s 17,” said Jackson. “We had chances. But you’ve got to make layups and you can’t turn it over. A few of those we miss and they go down and score. When you make mistakes against them, they make runs.”

Lincoln (12-17) never trailed in the first quarter, opening on a 9-4 run. Jaxon Smith hit two free throws to get the scoring started then hit inside. Elijah Frye, who came off the bench to score 11 points, went baseline for a bucket then Blake Smith, who had a team-high 19 points, drained the first of his three 3’s for the Patriots’ biggest lead of the night.

Ben Johnson, who finished with 14 points, including 12 from 3-point range, hit twice from behind the arc in the first to help LexCath get within 13-12 with under a minute to play in the period. However, Frye would bomb in his own 3-pointer with 2.2 seconds on the clock to put Lincoln up 16-12.

The first of the 12 lead changes came with 5:38 to go in the second quarter when Bailey swished in a 3-pointer for LexCath’s first lead, 19-18.

And the tug of war was on. There would be six lead changes in the second quarter. Blake Smith sank two free throws with 2:22 on the clock to edge Lincoln in front 28-22 for the final lead change of the half. Smith would follow with a bucket off a steal and Darius Napier, who scored 11 points off the bench, added a 3-pointer for a 33-31 Patriot lead at the break.

The third quarter was more of the same, although both offenses struggled, with Lincoln getting just eight points and LexCath, 14. The Knights took the lead into the fourth quarter with Johnson and Patrick Geoghegan both hitting 3-pointers for a 45-41 advantage.

“Catholic’s got a heck of a team,” Jackson said. “I’ve got great respect for the people up here and how Brandon (coach Salsman) does things.”

“Chase hadn’t practiced because he’s been sick. He hadn’t been at school until today,” Jackson said. “We played him to try and get some of his conditioning back. He was rusty, but he did some decent things.”

The Knights beat the Patriots on the glass 25-21, led by TC Price and Max Sparkman with five rebounds apiece. Bryson Yaden had a game-high six boards for Lincoln. Blake Smith and Phillips each had four.

“We’ve just got a lot of work to do between now and next Wednesday (district tourney),” Jackson said. “It will be a challenge but we’re looking forward to the opportunity. We’ve also got to try to get ready for Friday. We’ve got Senior Night Friday and we’re going to recognize some really good kids in our programs. Hopefully we’ll come out and play well Friday.”