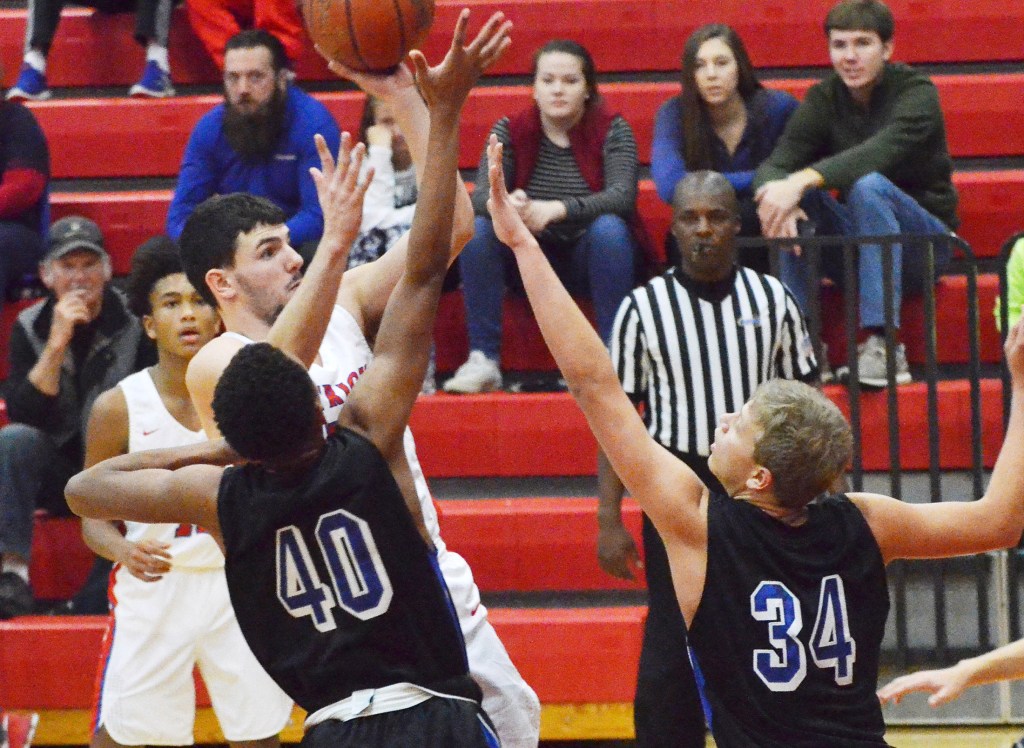 Photo by Nancy Leedy CHASE PHILLIPS, shown in an earlier outing, scored nine points for the Patriots in their loss to visiting Madison Central Friday night.

STANFORD — The Lincoln County Patriots had a tough time in their return to hoops action Friday night as they hosted No. 16 Madison Central.

It had been 10 days since either team had played a game, but the visitors certainly showed no signs of being rusty after the layoff, as Central used a 20-0 run over the first and second quarters to explode out to a 27-6 lead and never looked back, cruising past the Patriots 68-39.

Lincoln, which finished at 34 percent shooting (12-for-35), connected on just 13 percent of its shots in the first half. Blake Smith led the Patriots (9-10) at the half with four points, including the team’s first basket of the game.

Central held Lincoln to single digits through the first three periods, outscoring its host 17-6, 24-6 and 20-7. The Indians’ lead was 61-19 at the end of the third quarter, with the running clock invoked with just over three minutes to go in the period after two free throws by Kenyon McKee.

Lincoln did flip the tables on Central in the fourth quarter, outpointing the visitors 20-7.
Elijah Frye, who led Lincoln with 13 points, tallied 12 of those points in the final frame to help cut the Indians’ lead from 42 points down to 29 at the final horn. Chase Phillips, who finished with nine points and five rebounds, converted on two three-point plays in the fourth.

Central finished at 46 percent from the field, going 25-for-55. The Indians were 8-for-17 from 3-point range while the Patriots were just 2-for-8. Frye and Jaxon Smith had Lincoln’s 3-point shots.

Tyler Crafton had three 3’s for Central to finish with nine points. Dustin Geralds also had nine points along with six rebounds.

The Indians dominated on the glass, outrebounding the Patriots 46-20. Riley Bodner led Lincoln with six rebounds.