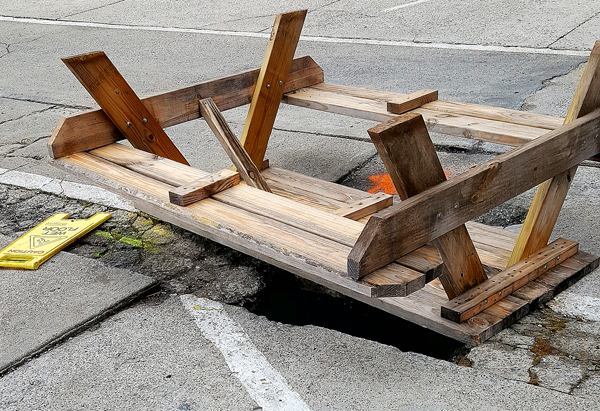 STANFORD — A deputy jailer was walking by the Lincoln County Courthouse Sunday when the ground beneath him started to disappear.

Tony Miracle wasn’t injured, according to Lincoln County Jailer Rob Wilson, but a wooden bench now covers the sinkhole he stepped in as he made his way around the courthouse steps toward the entrance of the jail.

“We don’t know what to attribute it to …” Adams said. “We have a major water leak out here that’s on the Stanford Water side. We called them bright and early yesterday morning because Luther suggested that it’s not really a stretch that that sinkhole could be attributed to this monster leak we’ve got out here.”

Adams said he was told the leak had been there for “quite some time.”

Galloway advised the county not to fill the sinkhole until the leak was fixed.

Plans have already been made to resurface the entire parking area, which is where the sinkhole opened, he added.

“It’s a lawsuit waiting to happen and has been for a while. That’s procrastination on my part. We will get that fixed,” Adams said.

Adams said he had concerns about the stability of the front area of the courthouse but was reassured by the engineer.

The resurfacing of the parking lot between the jail and courthouse should be done in the spring, he said.

Adams didn’t have an exact cost for the repairs available Tuesday morning but said it would be “minimal.”

Stanford Waterworks crews were working late Tuesday night to fix the leak, according to Wilson, and didn’t finish up until about 4 a.m. Wednesday morning.

Wilson said the courthouse and jail will be under a boil water advisory until Thursday (today) and notices will be posted on all areas affected.